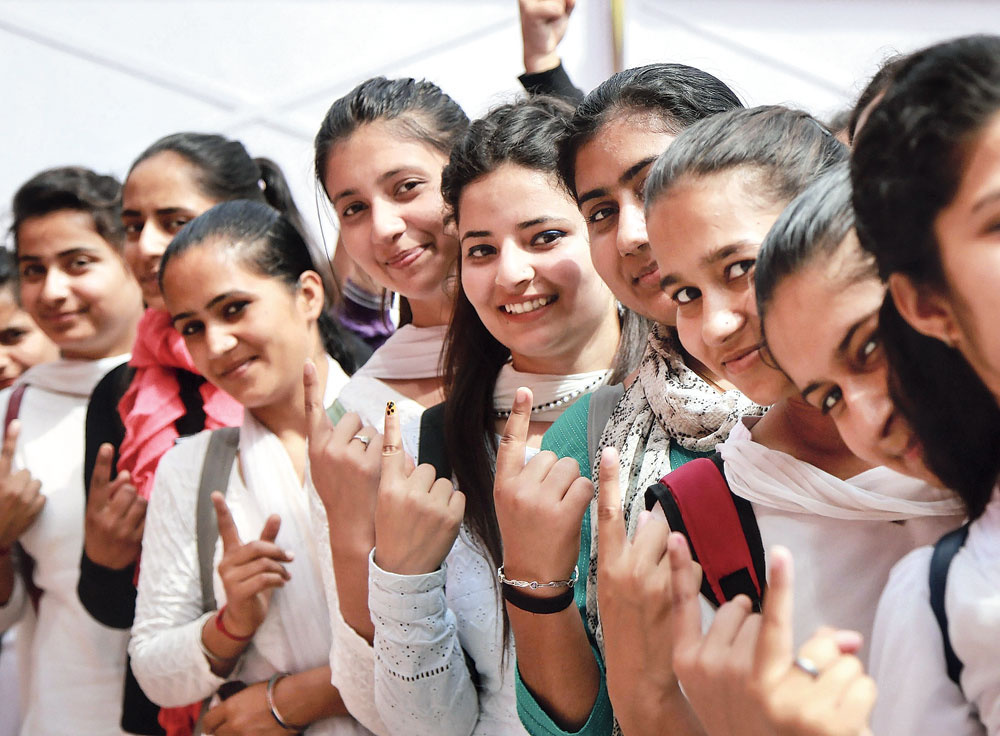 He said India may be growing but it is still a country of poor people.

“You have to strengthen the public education system. If the larger base is struggling, you cannot build the superstructure,” Govinda said.

A.K. Rath, former secretary at the department of school education and literacy, said education and health should be key priority areas for a developing country like India.

“Unfortunately, the spending on education in terms of its share in GDP has been declining. It touched a peak of 3.3 per cent of GDP in 2012. After that it is declining,” Rath said.

Rath’s fear is borne out from the central government’s expenditure on two key schemes, the Sarva Shiskha Abhiyan and the mid-day meal. The spending has remained static, which means decline in expenditure in real terms because of inflation.

The objective of the Abhiyan was to improve quality of school education and implement the Right To Education Act, which provides for free and compulsory education to every child up to Class VIII. The Act also wants every school to maintain one trained teacher per 30 students at the primary level among other things.

The meal scheme provides one meal a day to every child in a government school.

Ambarish Rai, convener of the RTE Forum, an organisation working for the implementation of the Act, said the spending on both schemes should have increased at the same pace as the GDP, which has been growing at over 7 per cent per annum.

“Neither Modi nor HRD minister Prakash Javadekar showed their commitment to the RTE (Right to Education) Act. Just before the NDA came to power, 9 per cent of the 13 lakh government schools were RTE Act-compliant in 2013-14. The percentage increased to 13 in 2017-18. It has increased by 1 per cent every year. Going by this pace, it will take 87 years to achieve 100 per cent RTE-compliant schools,” Rai said.

He said 10 lakh teacher posts are vacant in government schools. The RTE Act originally provided for complying with all the provisions by March 2015, which was extended to March 2019 through an amendment brought by the NDA government.

The 2 per cent primary education cess was started in 2004-05 to supplement government spending on the meal scheme and the Abhiyan. However, Rai said the NDA government has changed the policy and is utilising the cess funds before tapping budgetary support. The finance ministry issued an office memorandum to the HRD ministry in October last year to say that the department of school education should use the cess funds fully every year before utilising general budgetary support.

“The cess was started to supplement the spending on primary education. Now it is the main source of funding and the budgetary support is declining. The problems are plenty in the primary education sector,” Rai said.

Rath said the Kothari commission in 1966 recommended increasing the expenditure on education to 6 per cent of the GDP. “I wonder why poor spending on education is not an election issue in India. The political parties need to make this an issue,” Rath said.

The higher education sector has faced parallel funds cut too. The department of higher education has set up the Higher Education Financing Agency (Hefa) as a joint venture with Canara Bank to finance premier institutions to create capital assets through loans. Hefa raises funds through market borrowing and issue of bonds, including government guaranteed bonds.

Under the scheme, the institutions take loans, for which they have to pay a certain potion of the principal amount over 10 years. The government will bear the interest. Till 2017, the government was bearing the whole expenses as grants.

Govinda said under the loan scheme, the institutions will have to charge high fees to repay the portion of principal amount. The poor students will suffer, he said.

Sukumar said that while funding to public institutions has declined, the NDA government has promoted private institutions generally and some preferred institutions particularly. He cited the example of the proposed Jio Institute of the Reliance Foundation which has been selected for the status of Institution of Eminence status. The institute is yet to start.

“There is no fund cut by the central government. The states are not spending. That is why the spending in education in terms of its share of GDP is declining,” Singh said.

He said the Centre is giving higher funds to states under the 14th Finance Commission formula. They should spend more.

“Some of the schemes like Hefa were proposed by the UPA government. The NDA government implemented that,” Singh said.

No comments could be obtained from the HRD ministry about decline in funds for education.

Surgical Strike Day, Armed Forces Flag Day, National Unity Day, Good Governance Day, International Yoga Day…. While adding to the list of occasions that the higher educational institutions must celebrate every year, the Narendra Modi government has opted for a policy of gradual withdrawal of public funding for learning.

The to-do list for the 900-odd universities and 39,000 colleges of the country has got longer in the last five years. They should set up a wall with portraits of 21 Param Veer Chakra recipients, ask students to do Swachh Bharat Summer Internship to promote the government’s sanitation drive and promote digital monetary transactions, fly the national flag on a high pole at a central place on campus, and conduct research only on topics of national priorities.

Simultaneously, the University Grants Commission (UGC) and the Union human resource development (HRD) ministry have tightened purse strings and replaced the usual system of grant of funds with loans for infrastructure development in public institutions.

Academicians and policy experts said the education sector has been pushed into deep crisis in five years. The government’s choices of persons to head institutions invariably have the mark of the RSS, the ideological fountainhead of the BJP. The heads of temples of learning have used the institutions’ autonomy to impose nationalism, the academicians and experts said.

“The UGC has prescribed many occasions to be celebrated on campuses to instil nationalism. There is nothing wrong in being nationalist. It is good to be a nationalist. But the nationalist feeling should be cultivated, not imposed,” said N. Sukumar, professor of political science at Delhi University.

Under instructions from the HRD ministry, the UGC last year asked institutions to observe “Surgical Strike Day” on September 29 to remember the Indian Army’s action across the Line of Control in 2016. In May 2017, the ministry launched the Vidya Veerta Abhiyan programme and asked central universities to set up walls of portraits of Param Vir Chakra recipients to instil patriotism among students. In February 2016, a meeting of vice-chancellors of central universities passed a resolution to fly a 35kg national flag round the clock on their respective campuses. The NDA government decided to observe December 25 as Good Governance Day and October 31 as National Unity Day, which were passed to the institutions to observe.

Sukumar said the RSS wants to nurture a nationalist ideology among students. He criticised a recent communication from the ministry which quoted the minutes of meeting of vice-chancellors and asked all central universities to conduct research on issues of national priority.

“Universities need not impose any ideology but provide space to debate, discuss, dissent and do critical research on all kinds of ideology. The idea of conducting research on ‘national priorities’ is also deeply flawed. It does not explain what these priorities are. Is caste a national priority or not?” Sukumar said. “Higher educational institutions have suffered attack at multiple levels. The syllabus and pedagogy are dictated by the UGC and the autonomy to decide affairs is under threat too.”

He said the UGC was promoting uniform syllabus in the name of choice based credit system. The UGC is asking institutions to start courses in Vedic Studies and Yoga while it finds difficult to provide funds to conventional departments where poor students are enrolled.

Sukumar cited the example of Delhi University, where an academic forum recently mooted a proposal to drop three books of Dalit rights scholar Kancha Ilaiah from the political science syllabus because these books highlighted the issue of caste. The National Council of Educational Research and Training (NCERT) recently removed a section of a chapter in a Class IX book that discussed the social oppression that Nadar community women had to face from the Nair community in the 19th century in the erstwhile Travancore state.

The government’s neglect of funding public institutions is evident from two policy initiatives: Replacing usual grants to educational institutions with loans and spending funds collected under the primary education cess before tapping on budgetary support, and the decline in expenditure on education in terms of percentage of the GDP.

Professor R. Govinda, former vice-chancellor of the National Institute of Educational Planning and Administration (NIEPA), a public-funded education policy think tank, attributed the decline in funding to what he called misdirected focus of the government on elite institutions.

“This government has put its focus on a small number of elite higher educational institutions, not on the larger public education. The government is moving away from spending on scholarship for needy students to supporting them through loans. Instead of strengthening public hospitals, government is promoting insurance. Instead of giving grants, it is asking institutions to take loans. It is a wrong model which would not address the needs of all,” Govinda said. 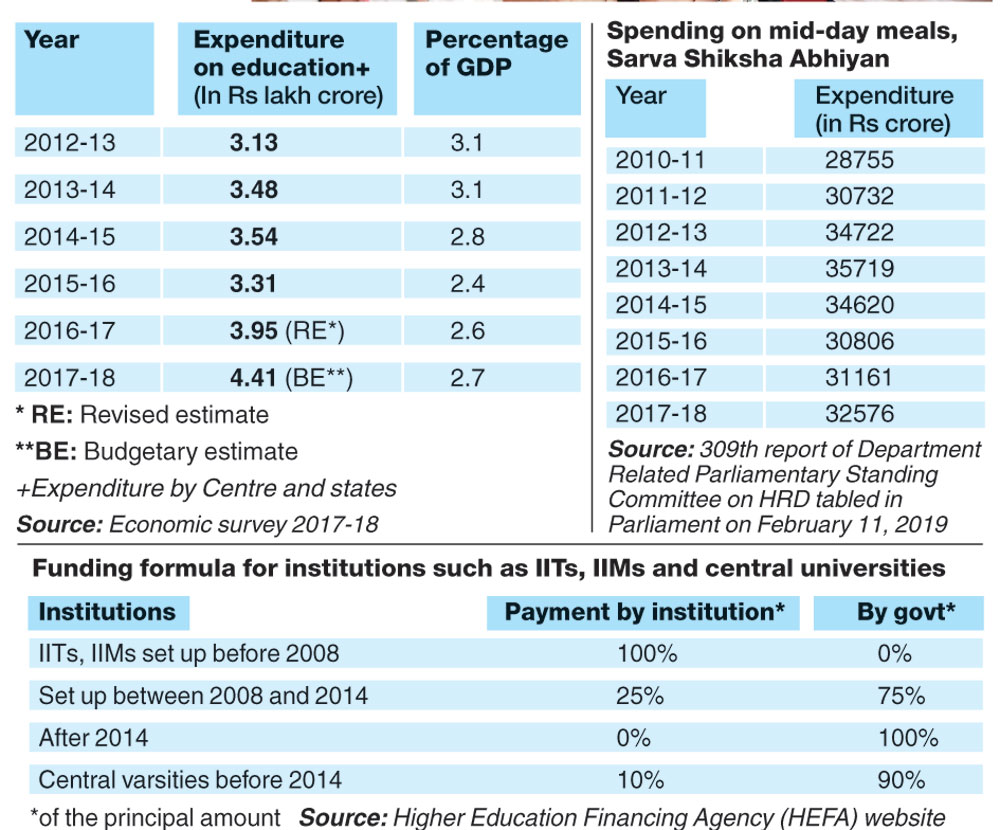