In Delhi, where Prime Minister Narendra Modi will be addressing the nation from the ramparts of the historic Red Fort, security has been stepped up 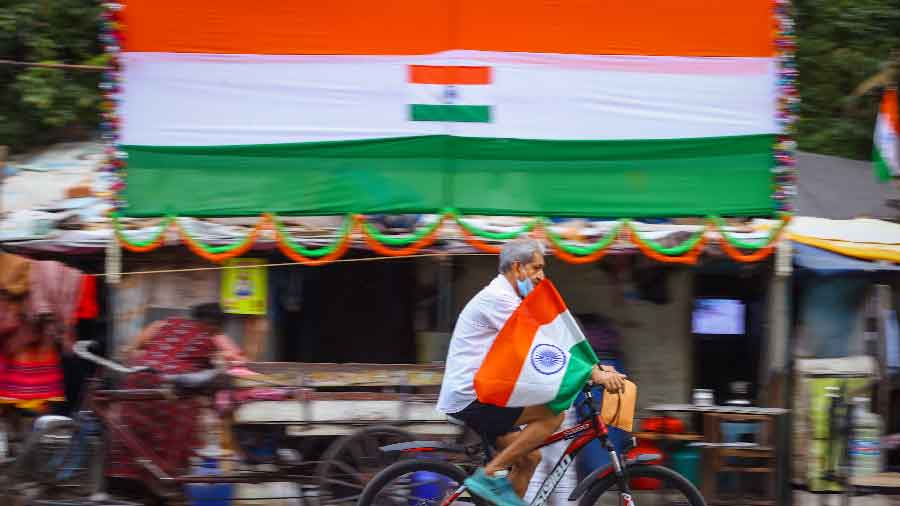 India has not only been decked in tricolour hues in the lead up to the 76th Independence Day celebrations, but also put under a heavy security blanket, right from Delhi, the epicentre of the mega celebrations, to Jammu and Kashmir.

The police machinery across states has been put on vigil to ensure that the celebrations are not hampered in any way.

In Delhi, where Prime Minister Narendra Modi will be addressing the nation from the ramparts of the historic Red Fort, security has been stepped up with Delhi Police deploying more than 10,000 personnel to guard the Mughal-era monument.

From facial recognition system (FRS) cameras installed at the entry point of the Red Fort to multi-layered security cover and deployment of over 400 kite catchers and fliers on rooftops and other sensitive locations in the fort area to counter any threats from sub-conventional aerial platforms - the area is under hawk-eye vigil.

With nearly 7,000 invitees expected to attend the event at the Red Fort, a five-kilometre area around the monument has been marked as "no kite flying zone'' till the tricolour is hoisted.

Dependra Pathak, Special Commissioner of Police (Law and Order), had said provisions of Section 144 have already been instituted in Delhi.

In the financial capital of the country, Mumbai, several law-enforcing units have been deployed to man the streets of the metropolis along with anti-drone systems, an official said.

According to the official, while there was no specific input in view of Independence Day, as a matter of routine, security of vital installations had been increased and officials have been asked to conduct spot visits.

"We are conducting anti-sabotage checks. Since Wednesday, 'operation all out' is underway comprising checking of hotels, vehicles and road barricading. Action is being taken against history-sheeters and those externed," the official added.

The official also anticipated crowding as the country is celebrating Azadi ka Amrit Mahotsav to mark 75 years of Independence.

In Kashmir, where the main function will be held at the Sher-e-Kashmir Cricket Stadium with Lieutenant Governor Manoj Sinha presiding over it, drones, snipers and policemen in plain clothes have been deployed for surveillance.

Vehicle checking has been intensified, according to officials, while police and paramilitary forces have been deployed in strength at many places in the city and elsewhere in the Valley to thwart any attempts by militants to disrupt the celebrations.

Random search of vehicles and frisking of people is also being carried out at several places in the Valley, they said.

Sharp shooters have been deployed at all high-rise buildings around the stadium to prevent any untoward incidents.

Human and technical surveillance is being used to ensure that the day passes off peacefully.

"Aerial watch is being maintained in major markets of Srinagar city, looking for miscreants, criminals and subversive elements. Such elements should know that there is an eye above looking for them," the Srinagar police said on Twitter.

Following a call by banned militant groups United Liberation Front of Asom (Independent) (ULFA(I)) and National Socialist Council of Nagaland (NSCN) to "boycott" the Independence Day celebrations and "total shutdown" in five states of the Northeast, security has been tightened.

In Agartala, additional forces have been deployed in strategic areas, while dog squads have been put into service to thwart any untoward incident, officials said.

A senior BSF officer said the 856-km international border has been put on high alert to ensure peace during the celebrations.

In Assam, a multilayer security arrangement has been put in place across parade grounds and other sensitive places, a top police officer said, adding that that they have information on some movements of the insurgent groups in a few districts, mostly in those along the inter-state border with Arunachal Pradesh.

"We have got inputs of militant movements in a few districts, mostly in Upper Assam along the inter-state border with Arunachal. The district SPs have been asked to deploy a multi-layered security system in and around the parade grounds in the state," he said on condition of anonymity.

The main Independence Day function in Assam will be held at the Veterinary College Playground in Khanapara in Guwahati.

On August 5, ULFA(I) and NSCN issued a joint statement calling for a "boycott" of the Independence Day and a "total shutdown" from Sunday midnight till 6 pm on Monday.

The police forces in Punjab and Uttar Pradesh (UP) also made some key arrests of suspects linked to terror groups, ahead of the Independence Day.

In UP, the police has arrested a 19-year-old man for allegedly having links with terror group Jaish-e-Mohammed and being in touch with handlers in Pakistan and Afghanistan through social media, officials said on Sunday.

The Punjab Police on Sunday claimed to have busted a Pakistan ISI-backed terror module and arrested four persons. The operation was carried out jointly by the Punjab Police and the Delhi Police.

Punjab Chief Minister Bhagwant Mann will unfurl the tricolour in a state-level function in Ludhiana on Monday, while his Haryana counterpart Manohar Lal Khattar will unfurl the flag in Panipat's Samalkha amid tight security.

Security beefed ahead of I-Day