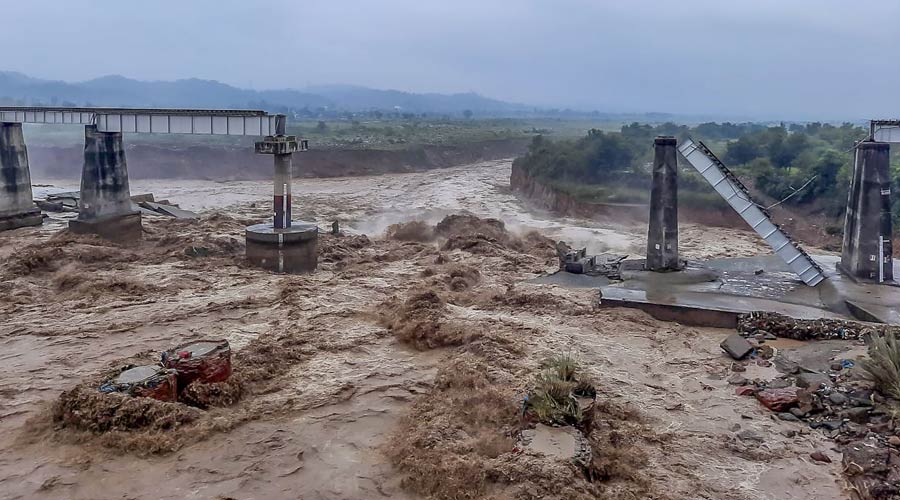 Six people were killed and 13 others were feared dead in separate incidents of flash flood and landslide triggered by heavy rains in Himachal Pradesh, officials said on Saturday.

Twenty-two people, who were stranded following a flash flood in the state's Hamirpur district, were evacuated safely, they said.

Chief Minister Jai Ram Thakur expressed condolences over the deaths and said that administration is carrying out rescue operations on war-footing in the affected districts.

According to officials, three people were killed after their house collapsed following a landslide triggered by rains in Chamba district.

In Mandi, a girl was killed and 13 others were feared dead in a landslide and flash flood triggered by heavy rains, officials said.

The body of a girl was recovered about half-a-km away from her house in Baghi Nullah on Mandi-Katola-Prashar road on Friday night, while five members of her family were washed away, state disaster management department officials said.

Several families also left their houses located between Baghi to Old Katola areas after a cloud burst and took shelter at safe places, the department added.

Besides, eight members of another family are also feared buried under the debris of their house following a landslide at Kashan village in Gohar development block, the department added.

However, the bodies have not been retrieved yet, it said.

Several vehicles were damaged and a number of villagers were stuck in their houses as water entered their houses and shops at Balh, Sadar, Thunag, Mandi and Lamathach, officials said.

Several vehicles parked along the road were damaged and residents remained stuck inside their houses, they said.

In another incident in this district, a 48-year-old man, identified as Bal Mukund, was killed in Lahar village following a landslide, they said.

Officials said two pillars of the Kangra valley Chakki river rail bridge was also washed away due to a flash flood. The Pathankot -Mandi national highway has been closed for traffic following landslides at different places.

Himachal Pradesh's disaster management department has issued a warning for landslide due to heavy rains predicted in the state till August 25.

Meanwhile, the Kangra district administration has issued an advisory, asking tourists and people to not go near rivers and streams after the India Meteorological Department predicted moderate to heavy rainfall till August 28.

Deputy Commissioner, Kangra, Dr Nipun Jindal said, "Tourist and the general public are advised not to go near rivers, streams and other water bodies. Similarly areas vulnerable to the landslide should also be avoided".

He also asked authorities to remain alert and respond to any situation that may arise out of the situation.

Jindal said the the deputy director of the education department has already been instructed to conduct online classes in schools.

Bridges washed away in Dehradun