First death in Bengal brings out fear that feeds on itself

Heart attack from acute respiratory distress syndrome triggered by Covid-19 was the reason for the death: Officials 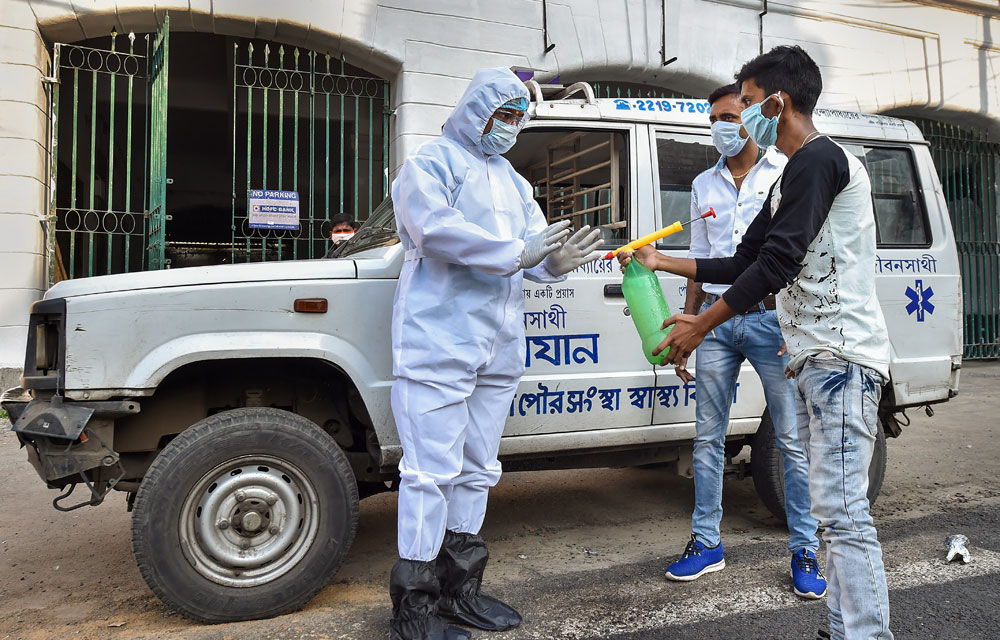 A medic staff member receives disinfectant spray from a colleague outside a hospital, before lockdown in Kolkata on Monday
(PTI)
Subhajoy Roy   |   Calcutta   |   Published 23.03.20, 09:58 PM

A 57-year-old Covid-19 patient has become the first such patient to die in Bengal, the tragic end bringing to the fore the fears preying on the minds of people about the last rites of coronavirus victims in spite of comprehensive guidelines laid down by the Centre.

The Covid-19 patient who died on Monday was under treatment at a private hospital in Salt Lake.

His case stood out from the remaining six patients in the state because it is still not clear how the man had contracted the virus that causes Covid-19. All the others had either returned to Calcutta from affected foreign countries or had contact with those who came from abroad.

On Monday night, a crowd objected to the cremation of the body at the Nimtala burning ghat, expressing fears of contamination.

The protesters tried to prevent crematorium staff from carrying the body into the VIP chamber although officials said they had made the funeral arrangements strictly in accordance with the guidelines laid down by the Union health ministry for Covid-19 casualties.

The Union health ministry guidelines say there is unlikely to be an increased risk to those who follow standard precautions while handling a body.

The standoff at Nimtala ghat was resolved late at night. A police posse and officials of the Calcutta Municipal Corporation were at the spot to monitor the situation.

The health department had to take possession of the body as all the immediate family members are in isolation.

A hearse could not be found initially as private service providers refused to carry the body of a Covid-19 patient, the hospital said in a statement.

“We had made all the preparations. It has been decided that the particular chamber will not be used for any cremation for the next three days to avoid any form of contamination,” said an official at Nimtala ghat.

The body was handed over to the state health department after taking the consent of the family members around five and a half hours after the patient was declared dead.

“The delay occurred after the authorised family member refused to come to the hospital to witness the handover process to the health department. Delay also occurred due to unavailability of a hearse carriage, with private service providers refusing to carry the body of a Covid-19 positive person,” the hospital statement said.

An official at the hospital said “heart attack from acute respiratory distress syndrome triggered by Covid-19” was the reason for the death.

Six persons who came in contact with the man, including three family members, are in the isolation ward of a government hospital in south Calcutta, an official said. Their samples have been collected and sent for tests.

Health department officials said they had asked his family to give details of the passports of the deceased man and his son, who is based abroad. The officials said the family had told them that the man’s son had not come to Calcutta recently.

The family members have told the officials that he had travelled to Bilaspur in Chhattisgarh on February 26 and returned to Calcutta on March 3, taking a train that had originated from Pune in Maharashtra.

The health department was trying to find out if he had come in contact with someone during the trip who has tested positive for Covid-19.

A public health expert said that if it was found the man did not come in contact with any positive patient and his son did not come to Calcutta, it could be a case of community transmission.

A community transmission is a situation where the chain of contact between two positive patients cannot be established, suggesting that the infection may have been caught from within the community.

Officials have drawn up a list of 305 people who came in contact with the man. Other than those admitted in hospital isolation, the rest have been asked to stay in home quarantine for at least 14 days, during which they should not come in contact with even their family members.

Eleven of the 305 people tested negative for Covid-19, a health department official said on Monday. They are now either admitted at a south Calcutta hospital or are in home quarantine. The decision on whether to discharge them would be taken on Tuesday, the official said.