‘Members of the SC-appointed committee are not dependable’ 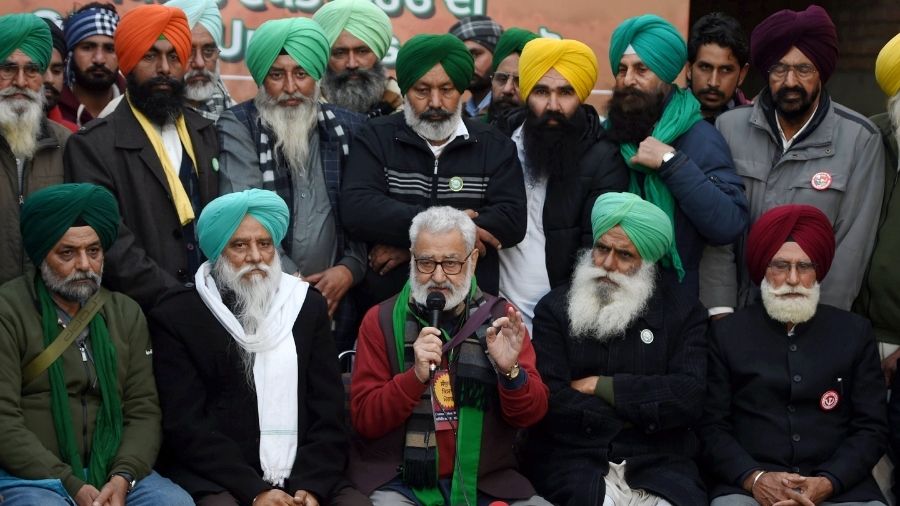 Farmers’ unions on Tuesday rejected the panel appointed by the Supreme Court to solve the impasse over the three agri laws, which they are protesting against, and said they will not appear before the panel and continue their agitation.

Addressing a press conference at Singhu Border in New Delhi, Union leaders claimed the members of the committee formed by the top court are “pro-government”.

Earlier in the day, the Supreme Court suspended the implementation of the controversial farm laws till further orders and set up a four-member committee to resolve the impasse between the Centre and the farmer unions protesting at Delhi's borders over the legislations.

“The members of the SC-appointed committee are not dependable as they have been writing on how agri laws are pro-farmer. We will continue our agitation,” farmer leader Balbeer Singh Rajewal said at the press conference.

The farmer leader said that unions never demanded the apex court form a committee to resolve the impasse over the laws, alleging the Central government is behind these developments.

“We are against the committee on principle. It is the government's way to distract attention from the protest,” he added.

Another farmer leader Darshan Singh said they will not appear before any committee, adding Parliament should discuss and resolve this issue.

“We don't want any external committee,” he said.

However, the farmer leaders said they would attend the January 15 meeting with the government.

The unions have said they want a complete repeal of the laws and they do not want to appear before any committee.

“It is clear that the court is being misguided by various forces even in its constitution of a committee. These are people who are known for their support to the three Acts and have actively advocated for the same,” a statement issued by All India Kisan Sangharsh Coordination Committee (AIKSCC) said.

Addressing a press conference, Congress' chief spokesperson Randeep Surjewala said the party welcomes the Supreme Court's concern over the farm laws, but the party has issues with the composition of the committee formed by it.

He said the members of the committee have already expressed their views in the past favouring the new laws “so the question arises in our minds that how justice will be done to farmers by their hands”.

“All the members of the committee constituted by the Supreme Court have already supported the agricultural bill,” Congress party’s Madhya Pradesh unit tweeted while tagging newspaper articles written by Gulati and Joshi and also news reports quoting Ghanwat and Mann speaking against the repeal of the laws.

Ghanwat said on Tuesday the new farm laws partially implement what his outfit has been demanding for decades. His attempt will be to improve them, he said, while coming out in support of reforms including permission for contract farming.

“We are not lauding the Centre's three acts that are described as giving freedom to farmers. It was the Shetkari Sanghatana headed by late Sharad Joshi which had pressed for these changes first,” Ghanwat, whose organization has been accused of backing the Centre on the issue despite representing farmers, said.

“Now the current government has tried to implement them to some extent. My role in the committee will be to protect the interest of farmers and improve these laws,” he said.