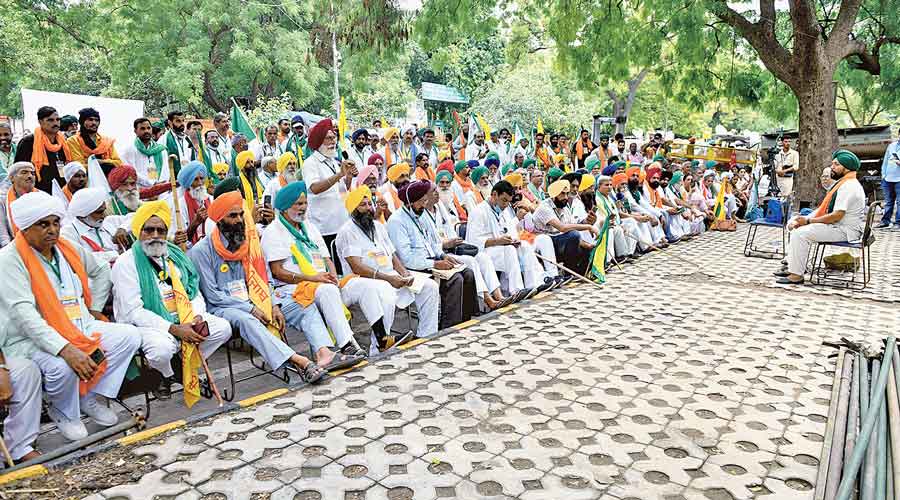 Protesting farmers on Thursday finally managed to bring their agitation to the vicinity of Parliament after two aborted attempts over the past six months.

The farmers held a Kisan Parliament at Jantar Mantar while the Opposition parties tried to raise the issue in the Lok Sabha and the Rajya Sabha.

Junior foreign minister Meenakshi Lekhi described the farmers as “hooligans” while reacting to allegations that the protesters roughed up a cameraperson at Jantar Mantar.

In reply to another question, the newly appointed minister said: “Stop calling them farmers. They are not farmers.… A farmer doesn’t have time to come to Jantar Mantar and protest. They are working in their farms.”

Given the BJP’s “brazen” attempts to “stifle” all voices of dissent and protest, the fact that it had failed to break the spirit of the farmers was clearly rankling, Amarinder said. The government has no right to “malign” and “defame” the farmers, the chief minister added.

In both Houses, members of various Opposition parties submitted notices for suspension of regular business to discuss the farmers’ demand for repeal of the three contentious farm laws. In the Rajya Sabha, such notices were submitted by the CPM’s Elamaram Kareem and the CPI’s Binoy Viswam, while the Congress’s Manickam Tagore did so in the Lok Sabha.

They also held protests within the Parliament complex, holding banners that were not permitted in the legislative chambers. While the Congress held a protest in the morning, the Left parties along with the DMK and the RJD organised a dharna around noon.

The Trinamul Congress is said to have raised the issue at the business advisory committee meeting and demanded repeal of the three laws.

Between the Pegasus controversy and the farmers’ agitation, no business could be taken up in either House all day as proceedings were adjourned repeatedly in the face of disruptions.

Outside, the farmers held their own “parliament” under the banner of the Samyukta Kisan Morcha (SKM) at Jantar Mantar with a tight security cordon around them.

Some MPs visited the site where the Kisan Panchayat was held but no one was allowed to use the SKM platform to address the gathering in keeping with the farmers’ policy not to allow any political party to hijack their agenda.

According to Yogendra Yadav of Jai Kisan Andolan, farmers have issued a “people’s whip” to the parliamentarians to raise their movement continuously in Parliament during the ongoing monsoon session. “The Kisan Panchayat is our effort to keep a watch on the MPs and ensure that they bow to the people’s whip.”

Only 200 farmers proceeded to Jantar Mantar and everyone was issued an identity card by the SKM as a precaution against any mischief making and to avoid a repeat of the tractor rally fiasco on January 26 that had almost derailed the movement.

Farmers: Govt snooping on us