Advertisement
Home / India / Farmers should keep fighting till they get remunerative prices: KCR in Chandigarh
'Farm community can change government'

Farmers should keep fighting till they get remunerative prices: KCR in Chandigarh 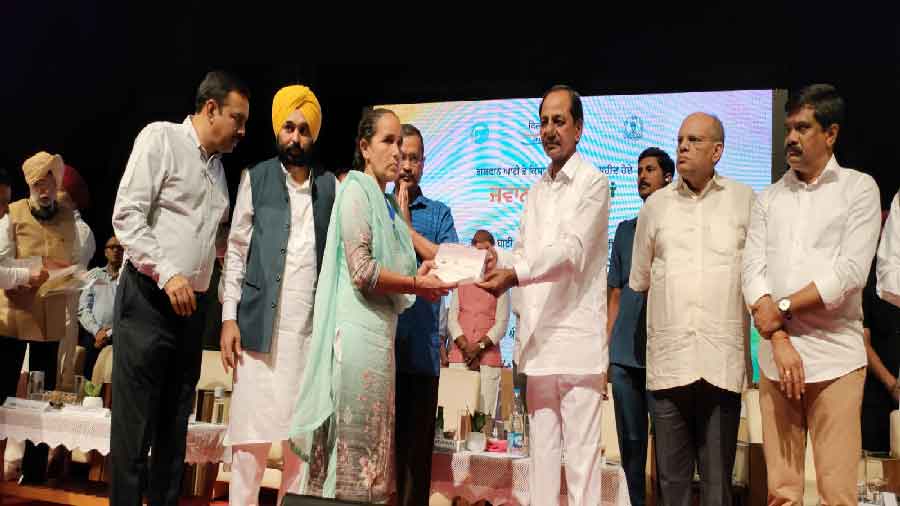 Telangana Chief Minister K Chandrashekar Rao on Sunday reached out to farmers in Punjab and Haryana, saying they can change government if they want and should keep fighting till they get a constitutional guarantee for remunerative prices of their crops.

The Telangana chief minister also paid tributes to the farmers who died during the course of the agitation against the Centre's now-repealed farm laws and said he bows to their grit and determination.

"If farmers want, they can change government. It is not a big thing. From where the power comes, it comes from us. The agitation should continue till farmers get the right price and there is a constitutional guarantee for it," he said.

He urged farmers that their next agitation should be throughout the country.

"Farmers from north, south, east and west should fight together," said the chief minister, who is visiting multiple states apparently eyeing a role in the national politics.

He met Samajwadi Party chief Akhilesh Yadav on Saturday and had a lunch with Delhi Chief Minister Arvind Kejriwal on Sunday. Rao, also called KCR, is scheduled to visit Bihar and West Bengal in coming days.

In Chandigarh, he was accompanied on the dais by Kejriwal, Punjab Chief Minister Bhagwant Mann and farmer leader Rakesh Tikait.

Without naming the BJP-led Centre, Rao said it does not like it if any state or a chief minister does something for farmers as he addressed the kin of those who died during the stir against the farm laws.

Punjab Chief Minister Bhagwant Mann's announcement of giving minimum support price on moong was also not liked by them, he said.

"We give food to the country after toiling hard in the fields. There should be justice with us. There should not be such a painful situation," he added.

"If any state or CM does anything for farmers' welfare, they do not like it. They put pressure on you," Rao said.

Referring to the stir against the central laws, he said farmers were called Khalistani and traitors.

"Eyes well up. It is painful. Why is our country such? There is a need to worry about it," he said.

Rao said there are many problems for which people have to struggle, die and sacrifice their lives.

"Problems are there in every country. The kind of problems we have, it does not exist anywhere," he said.

Rao said before the formation of Telangana state, the situation of the farming community was pitiable.

"Every day, 10-20 farmers used to commit suicide and there was also power shortage. Nobody was there to hear the farmers out," said Rao.

He said after the formation of Telangana as a state, the power situation was set right and round the clock electricity was given to every sector.

"Why I am saying this today is because the government which is sitting in Delhi is asking for installation of meters, measuring their consumption and taking charges," the Telangana chief minister said.

"We had said in our assembly we will not let the meters installed even if we have to die for it. They can do anything," he said apparently referring to the Centre.

Rao also lauded the contribution of Punjab to the freedom struggle and bringing green revolution in the farming sector. "Indian history can never forget it. Punjab brought green revolution and fed the country. it can never be forgotten," he said.

Rao distributed cheques for Rs 3 lakh as financial assistance to the kin of the farmers, who died during the stir against the farm laws.

Over 700 farmers had died during the course of the agitation at the Delhi borders due to various reasons, including harsh winter, road accidents, cardiac arrest and ailments.

Rao also gave Rs 10 lakh compensation each to families of four Punjab soldiers who died in a violent clash between Indian and Chinese troops at Galwan Valley in Ladakh in 2020.