Move intends on drawing attention to the govt’s indifference towards the agitating farmers and appearing to leave the ruling dispensation embarrassed. 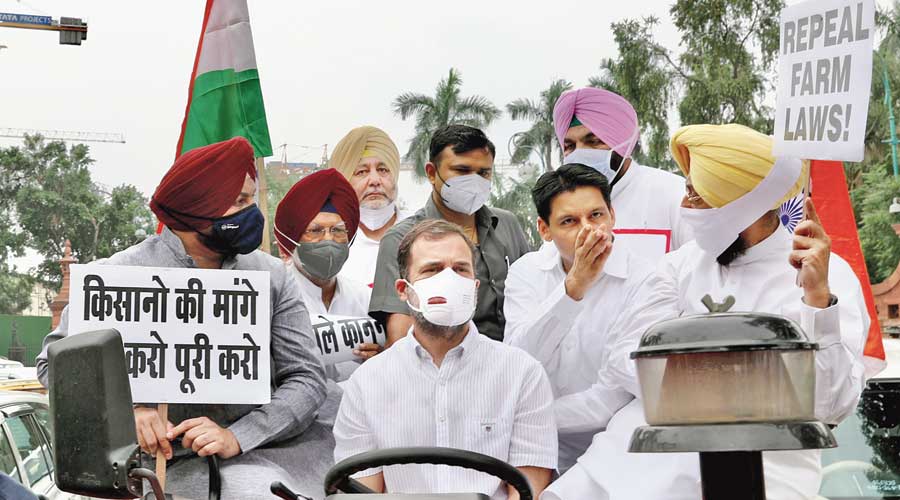 Rahul Gandhi on Monday arrived in Parliament driving a tractor, intent on drawing attention to the government’s indifference towards the agitating farmers and appearing to leave the ruling dispensation embarrassed.

“We have brought the farmers’ message to Parliament. The government doesn’t allow a debate on the farmers’ ongoing protest in Parliament,” Rahul told reporters, explaining the optics that would have delighted the farmers sitting on the roads outside Delhi.

“They are suppressing the farmers. We have brought the tractor here to convey the farmers’ message to the government. The black laws will have to be repealed,” he added.

The farmers are protesting against three new farm laws that they say would facilitate their exploitation by big companies.

“These laws were framed to help two-three industrialists. The whole of India knows this. These laws are not going to help the farmers,” Rahul said.

Rahul said: “They know why these laws were brought. They have to be taken back, there is no other way.”

The Congress has regularly been protesting in Parliament demanding a discussion on the contentious farm laws and the Pegasus snooping controversy.

No demonstrations are allowed near Parliament, and Rahul would definitely have been stopped on the way had he come the entire distance from his own residence on a tractor, which has become a symbol of the farmers’ protest.

But the Congress leader had cleverly started off from the residence of party Rajya Sabha member K.T.S Tulsi, which is quite close to Parliament House. His arrival on a tractor at the gate of the complex caused a flutter.

The red tractor carried a banner on the front condemning the three “black farm laws”. While Rahul drove the vehicle, party MPs from Punjab and Haryana sat with him on the tractor carrying placards demanding the repeal of the contentious laws.

How badly the security establishment was rattled became immediately obvious from the tough action taken against Congress general secretary Randeep Surjewala when he tried to drive the tractor back after Rahul had left it at Parliament’s entrance.

Along with Surjewala on the tractor were Youth Congress president B.V. Srinivas and other party functionaries. The police promptly arrested all of them and drove them to Mandir Marg police station on a bus.

They were released in the evening after daylong detention, during which Youth Congress workers protested outside the police station. The Congress accused the government of suppressing people’s right to protest.

“We are not going to be frightened by the police’s highhandedness and handcuffs. The agitation in support of the farmers will continue under the leadership of Rahul Gandhi,” Surjewala said.

“This is a battle for the survival of the farmers and the Congress will not allow the government to bulldoze its way.”

The last time tractors had had a field day in Delhi was January 26, when the government had allowed the protesting farmers to hold a “tractor parade” along specific routes in Delhi.

But with some breaches of route happening amid huge confusion, and a few ugly scenes witnessed at the Red Fort, the protesting farmers’ movement in the capital has been strictly restricted since then.

Now 200 farmers are allowed to come on buses to Jantar Mantar daily to hold a symbolic protest. It was the turn of women farmers on Monday, when the Delhi police inexplicably prevented former Congress MLA Alka Lamba from joining the protest.

She was placed under house arrest with the police saying no one who lacked prior permission would be allowed to join in.

The farmers protesting for the past eight months at three venues outside Delhi – at the Singhu, Tikri and Ghazipur borders – have been desperately trying to catch the government’s attention.

They plan to campaign against the BJP in the upcoming state elections in Uttar Pradesh, Punjab and Uttarakhand next year, and believe the party can be taught a lesson.

The situation is extremely volatile in large swathes of Punjab, Haryana and western Uttar Pradesh where the farmers have prevented BJP leaders from holding any programmes.