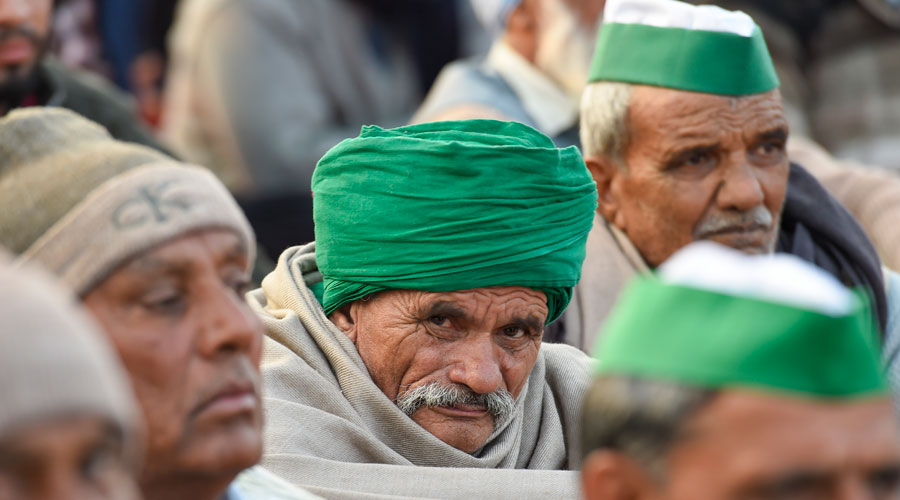 Another NDA ally, Hanuman Beniwal, has quit the BJP-led alliance after the Shiromani Akali Dal, reflecting the intense pressure from the ground in agrarian states that the Narendra Modi government has so far chosen not to acknowledge.

The loss of Beniwal, who hails from Rajasthan, need not in itself worry the BJP but its possible ripple effect may impact the stability of the coalition government in adjoining Haryana, where leaders are beginning to taste a farmer backlash.

Beniwal on Saturday marched along with thousands of his farmer supporters from Rajasthan to Delhi’s borders and declared he was snapping ties with the NDA in protest against the three new farm laws.

Following Beniwal’s march with the farmers, Delhi appears to be under siege from all sides — Haryana, Uttar Pradesh and now Rajasthan.

Beniwal, whose Rashtriya Loktantrik Party derives strength from the landed Jat community in Rajasthan, had earlier threatened to quit the ruling NDA at the Centre if the three “anti-farmer” laws were not repealed.

“I am not stuck to the NDA with Fevicol. Today I separate myself from the NDA,” Beniwal, who represents the rural Nagaur Lok Sabha seat in Rajasthan, said while addressing his farmer supporters at the Shahjahanpur-Kheda border with Delhi in Alwar district.

“I have quit the NDA in protest against the three farm laws.… The laws are anti-farmer.… We won’t stand with anyone who is against farmers,” he added, amid loud slogans hailing his move.

Although BJP managers had expected Beniwal to quit, the move is likely to add to the pressure on the government at a time the farmers’ protest is showing no signs of ebbing.

Beniwal, his party’s lone MP in the Lok Sabha, got thousands of farmers to march from Jaipur to the Delhi border. The crowd of mostly Jat farmers from northeastern Rajasthan expressed anger at the farm laws. Beniwal said he was not leading the farmers’ march, he had only joined it.

Beniwal, facing pressure from his Jat backers who have a substantial presence in Rajasthan, had first written a letter to Union home minister Amit Shah demanding repeal of the laws. He then quit as member of parliamentary panels before severing ties with the BJP on Saturday. The RLP has three MLAs in Rajasthan.

The BJP-led government in Haryana survives on the support of Dushyant Chautala’s Jannayak Janata Party. Like Beniwal, Dushyant too banks heavily on the Jat community and is already under pressure to get the laws revoked or quit. Some of his 10 MLAs are learnt to be threatening to step down, citing intense pressure from their Jat voters.

Dushyant, the deputy chief minister, faced boycott in his constituency on Thursday. Villagers dug up a helipad prepared for his visit to Hisar, demanding he relinquish his post in protest against the farm laws. Dushyant was forced to cancel his trip as local farmers refused to allow him to enter the village he was scheduled to visit.

Haryana chief minister Manohar Lal Khattar of the BJP has also been gheraoed and shown black flags by farmers.

Early this month, Dushyant had called on defence minister Rajnath Singh and agriculture minister Narendra Singh Tomar, urging them to resolve the crisis. After the meeting, he had expressed hope of a “conclusive result” in the next 48 hours.

Weeks have passed but the government, led by Prime Minister Narendra Modi himself, continues to firmly back the new laws, calling them beneficial for farmers and accusing the Opposition of misleading the cultivators.

“We are not worried about Beniwal. He will again join hands with us later,” a BJP leader said, underlining that the Rajasthan MP had said he would not align with the Congress. “We hope Beniwal’s move doesn’t put pressure on Dushyant Chautala and his MLAs.”

Congress stalwart and former Haryana chief minister Bhupinder Singh Hooda, also a Jat leader, is believed to be trying to win over the JJP’s MLAs. Since the difference in numbers between the BJP and the Congress is not very wide in the state, a threat looms over the Khattar government.