Centre asks farmers to come up with concrete proposals 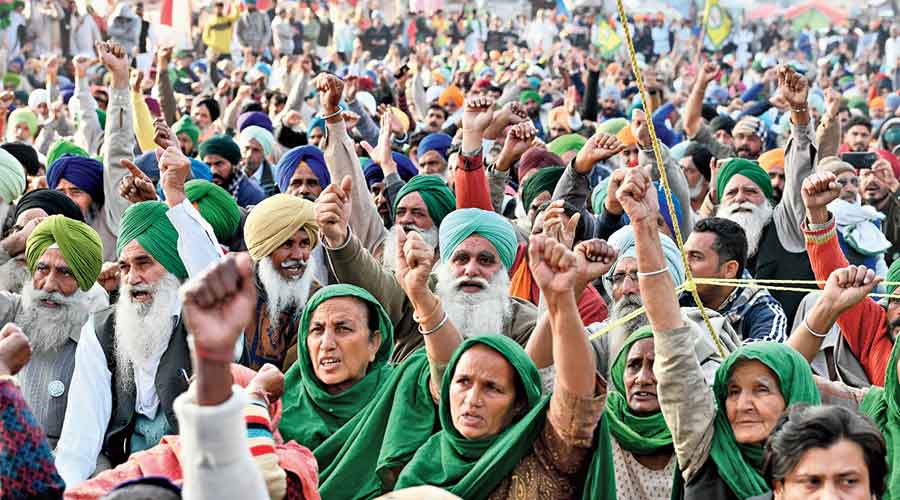 Urging farmer unions to form an informal group among themselves to prepare concrete proposals to be discussed in the next meeting, Agriculture Minister Narendra Singh Tomar said detailed discussions took place at the ninth round of talks on Friday but could not reach a decisive stage.

"Talks took place over three farm laws in a cordial atmosphere and detailed discussions took place on some issues, but couldn't reach a decisive stage," he said.

"We suggested they can form an informal group of people who can understand the laws better and prepare some concrete proposals, detailing what are farmers' expectations and what clauses are problematic for them, which the government can consider with an open mind," the minister said.

He further said the government is hopeful of discussions reaching some decisive stage at the tenth round of talks on January 19.

On the direct talks between the government and farmers continuing despite the Supreme Court appointing a panel, Tomar said everyone is fully committed to the apex court and the government will also present its side before the committee panel when invited.

"Unions want to continue the dialogue with the government and we have no problem with that. The SC-appointed panel will also work for the welfare of farmers," he said.

Incidentally, the tenth round of talks has been scheduled for a day when a Supreme Court-appointed committee to resolve the impasse is also likely to hold its first meeting. A day before that, the apex court is likely to hear a petition against a tractor rally call given by the protesting farmers for the Republic Day on January 26.

"Discussions happen at various platforms and a solution can emerge from anywhere... Our effort is to find a solution at the earliest through dialogue so that the farmers' protest ends. Farmers are sitting in cold weather amid the threat of Covid-19 and the government is concerned about that also and is therefore engaging with farmers with an open mind," Tomar said.

The minister said the government will also present its side before the SC-appointed panel whenever it is asked to do so.

Protesting farmer unions stuck to their demand for a complete repeal of three contentious farm laws at their ninth round of talks with three central ministers but while the government asked them to be more flexible in their approach and expressed willingness for necessary amendments, as the two sides decided to meet again on January 19.

Farmer leader Joginder Singh Ugrahan told reporters after the meeting that the unions urged the government to repeal the three laws, but the Centre was unwilling to do so.

Ugrahan said the union leaders also raised the issue of NIA raids on transporters in Punjab who are supporting farmers' protests and were providing logistic support for the agitation.

At the meeting that lasted for nearly five hours, including a lunch break, farmers unions said they are committed to continuing holding direct talks to resolve the over-one-month-long deadlock over three agri laws, even as a committee has been formed by the Supreme Court to resolve the deadlock.

In his opening remarks, Agriculture Minister Narendra Singh Tomar urged farmer leaders to be flexible in their approach as has been done by the government.

Besides Tomar, Railways, Commerce and Food Minister Piyush Goyal and Minister of State for Commerce Som Parkash were part of the government side talking with representatives of around 40 farmer unions at the Vigyan Bhawan here.

"Both the government and farmer unions have reaffirmed their commitment to continue with the direct dialogue process," All India Kisan Sangharsh Coordination Committee member Kavita Kuruganti, who is part of the meeting, said.

"In his opening remarks, Tomar ji said you keep saying that the government is adamant and making it an issue of ego, even though we have accepted several demands. Don't you think you should be flexible and not stick to one single demand of repealing the laws," said Baljit Singh Bali of Punjab Kisan Morcha.

Farmer leader Darshan Pal said there was a good discussion on all three laws. "There is a possibility of some resolution. We are positive," he added.

Another leader Rakesh Tikait said: "Government has told us that the solution should be found through dialogue and not a court. Everyone is of the same views. There is a possibility of some solution."

Thousands of farmers, mainly from Punjab, Haryana and western Uttar Pradesh, are protesting at various border points of Delhi for over a month now against the three laws.

On January 8, the eighth round of meeting had remained inconclusive as the Centre ruled out repealing the three contentious laws claiming nationwide support for the reforms. However, farmer leaders had said that they were ready to fight till death and their 'ghar waapsi' would happen only after 'law waapsi'.

In the sixth round held on December 30 last year, some common ground was reached on two demands -- decriminalisation of stubble-burning and continuation of power subsidies.

Enacted in September 2020, the government has presented these laws as major farm reforms aimed at increasing farmers' income, but the protesting farmers have raised concerns that these legislations would weaken the minimum support price (MSP) and "mandi" (wholesale market) systems and leave them at the mercy of big corporations.

The government has maintained that these apprehensions are misplaced and has ruled out a repeal of the laws.

Bhartiya Kisan Union president Bhupinder Singh Mann, however, on Thursday recused himself from the committee.

Tomar said the meeting with farmers unions was cordial and all three laws were discussed, while there was a detailed discussion on the Essential Commodities (Amendment) Act.

"During the discussion, farmers expressed their views and our minister (Goyal) also shared the details and tried to address their concerns. But the discussion did not reach to a conclusion. After that, the government and union mutually decided to meet again on January 19 at 12 noon," he said.

The minister said he hopes that unions will take forward the talks based on today's discussion.

"We have also suggested they form an informal group of those who can talk properly about the laws, about expectations from the government and also about provisions of the laws that they feel are against farmers. If they discuss all these and come out with a draft of concrete proposals then the government is ready to discuss that with an open mind," he said.

Tomar said the government has understood farmers' apprehensions in the course of several rounds of discussion so far and had expressed its willingness to address those apprehensions and a written proposal was also sent to unions.

"But they didn't accept the proposal and therefore the discussions are happening... I hope that we will move forward towards finding a solution," he said.

On protests held by Congress party across the country and allegations levelled by Rahul Gandhi against the government with regard to the farm laws, Tomar said, "The entire Congress party also laughs at and makes fun of Rahul Gandhi's statements and action."

"I want to tell him through the media that they had promised to undertake these reforms in their 2019 election manifesto. If he doesn't remember, he can read his manifesto again. If it is there in the manifesto, then Rahul Gandhi and Sonia Gandhi should come before the press and make it clear if they were lying then or are lying now," he said.