Farmers to hold Kisan Parliament near Jantar Mantar from today

Police ask peasants to take different route, only allow 200 at site as planned 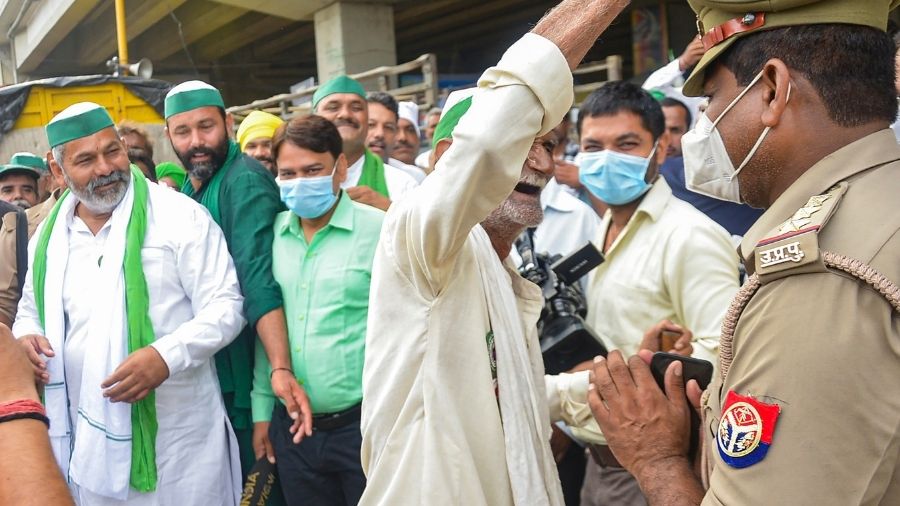 The 200 farmers, wearing identification badges and carrying flags of their unions, travelled to Jantar Mantar from their Singhu border protest site in buses with a police escort.

The protesting farmers have been restricted to a small section of Jantar Mantar with police putting up barricades on both sides.

Several teams of the Delhi Police manned the roads leading to the protest venue, while personnel of the Rapid Action Force, a specialized unit of the Central Reserve Police Force, stood guard at the site, carrying riot shields and batons.

A water cannon and metal detector gates have been deployed at the site. Two tankers carrying drinking water have also been stationed there.

The Samyukt Kisan Morcha (SKM), an umbrella body of farmer unions spearheading the protest against the three farm laws, has been asked to give an undertaking that all COVID-19 norms would be followed and the stir would be peaceful.

Although the SKM had said that their protest at Jantar Mantar would continue till the end of the Monsoon session of Parliament on August 13, the lieutenant governor has given permission for protest till August 9.

This is the first time since the violence in the national capital during a tractor rally on January 26 that the authorities have granted permission to the protesting farmer unions to hold a demonstration in the city.

Gathering for protests is currently not allowed in the national capital in view of the COVID-19 pandemic, according to an order by the Delhi Disaster Management Authority.

What the peasants plan

After a meeting with Delhi Police officials on Tuesday, a farm union leader said they will hold peaceful demonstrations at Jantar Mantar demanding scrapping of the agri laws and no protester will go to Parliament.

"We will hold 'Kisan Parliament' from July 22 till the monsoon session ends and 200 protesters will go to Jantar Mantar every day. One speaker and one deputy speaker will be chosen every day.

"In the first two days, there will be a discussion over the APMC Act. Later, the other bills will also be discussed every two days," a leader had said.

"We informed the police that every day 200 farmers will go to Jantar Mantar from the Singhu border in buses during the monsoon session. It will be a peaceful demonstration and protesters will have identification badges.

"When police asked us to reduce the number of protesters, we told them to focus on the law-and-order situation and also gave assurance that the protest will be peaceful," Kakka had said.

A tractor parade in Delhi on January 26, that was to highlight the demands of farmer unions to repeal three agriculture laws, had dissolved into anarchy on the streets of the national capital as thousands of protesters broke through barriers, fought with the police, overturned vehicles and hoisted a religious flag from the ramparts of the iconic Red Fort.

Congress MPs staged a protest inside the Parliament complex in support of protesting farmers and demanded that the three agriculture laws be withdrawn.

Congress leader Rahul Gandhi and other leaders of the party participated in the protest.

Congress MPs from both houses gathered outside Mahatma Gandhi's statue in Parliament complex and raised slogans against the government and the prime minister.

Carrying placards and hoardings, they also raised slogans in support of the farmers and their demands.

The Congress has been demanding the repeal of the three farm laws, which the farmers are against alleging that these legislations will end the mandi and MSP procurement systems and leave them at the mercy of big corporates. The government has rejected these apprehensions as misplaced.