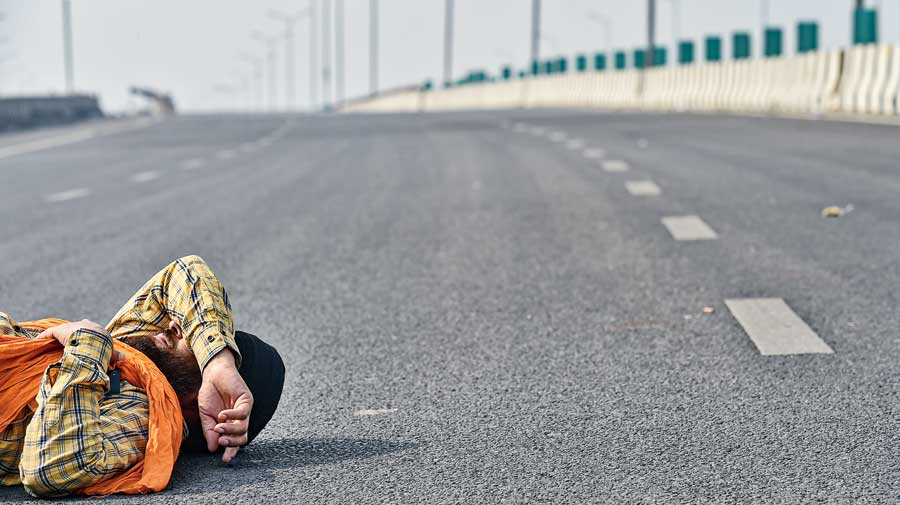 Part of a Dilli Chalo protest group, a farmer sleeps on the road at the Ghazipur border near New Delhi on Sunday. It’s almost a week since Prime Minister Narendra Modi swayed to fast-paced music in Varanasi and basked in the glow of a laser show, which has become an indelible image of insensitivity as countless farmers were literally left out in the cold.
PTI
Anita Joshua   |   New Delhi   |   Published 07.12.20, 03:04 AM

Over a dozen Opposition parties have backed the farmers’ call for a countrywide bandh on Tuesday, while grateful farmer leaders have clarified that no political party would be allowed to use its banners while joining the agitation.

The farmer unions have stressed that participation is voluntary and are trying to ensure the bandh remains peaceful, aware that the smallest incident would be blown up by what they call the “godi (lapdog) media” and the government’s army of online trolls.

Government supporters have hit back by levelling the charge of hypocrisy against some of the Opposition parties — particularly the Congress and the NCP — alleging they had advocated these same farm reforms when in government.

Delhi Chief Minister Arvind Kejriwal is likely to visit the Singhu border on Monday, where thousands of farmers are protesting against the Centre's new farm laws. The Aam Aadmi Party (AAP) had on Sunday extended its support to the 'Bharat Bandh' called by farmers' organisations on December 8.

“We welcome the support extended by political parties but we have one condition: they cannot come with their banners,” said Tejinder Singh Virk of the Terai Kisan Union of Uttarakhand.

He said that farmers from Uttarakhand and western Uttar Pradesh were picketing the Ghazipur border between Delhi and Uttar Pradesh, belying the government’s claim that only one community from a single state was agitating.

The Shiv Sena and the Telangana Rashtra Samiti have separately expressed support for the bandh call. Trinamul too is backing the farmers, and a team from the party has visited the protesters at the Singhu border.

“These new agri laws passed in Parliament in a brazen anti-democratic manner preventing a structured discussion and voting threaten India’s food security, destroy Indian agriculture and our farmers, lay the basis for the abolishment of MSP and mortgage Indian agriculture and our markets to the caprices of multi-national agri-business corporate and domestic corporate,” the joint statement by 11 parties said.

“The central government must adhere to the democratic processes and norms and meet the legitimate demands of our kisans-annadatas.”

The All India Kisan Sangharsh Coordination Committee has urged all traders and commercial establishments to down shutters on Tuesday, while repeatedly underscoring that participation in the bandh is voluntary.

Roads will be blocked and the supply of vegetables is expected to be affected on Tuesday.

Exceptions will be made only for health and emergency services, besides weddings in north India where this is the marriage season, Yogendra Yadav of the Jai Kisan Andolan said.

Baldev Singh of the All India Kisan Sabha said violence would not be tolerated during the bandh, and action would be taken against those who use force.

About Saturday’s talks with the government — the fifth since the three farm bills were passed — Shiv Kumar Sharma “Kakaji” of the Rashtriya Kisan Mahasangh said: “We are still engaged with the process because we don’t want a breakdown of conversation.”

BJP national secretary (organisation) B.L. Santosh dug out newspaper reports from April 2008 that described how farmers were protesting a ban on private purchase of wheat.

“The very same farmers of Haryana & Punjab demanding private firms operation. Then why is this Bandh on Dec 8. Who is doing it..? #FarmersWithModi,” Santosh tweeted.

An August 2010 letter from then agriculture minister Sharad Pawar is also circulating on various social media platforms. The letter advocates amendments to the Agricultural Produce Market Committee Act to encourage the private sector to provide alternative and competitive marketing channels in the overall interest of the farmers.

Pawar came in for special attention from the Right wing on Sunday because of his statement that the government should take the farmers’ protest seriously or it could spread to other parts of the country.

Pawar, who is on record saying the bills were well-intentioned, has questioned the haste in which they were passed without discussion.

He had participated in a day’s fast in September in solidarity with the Rajya Sabha MPs who had been suspended for disrupting proceedings after their demand for a proper counting of votes during the passage of the bills was rejected.

The government’s critics contended that Pawar alone could not be accused of doing somersaults — he had for company none other than Narendra Modi.

They highlighted how Modi had as Gujarat chief minister stalled a switch to the GST before becoming its most ardent advocate as Prime Minister, even organising a midnight session of Parliament for its rollout.