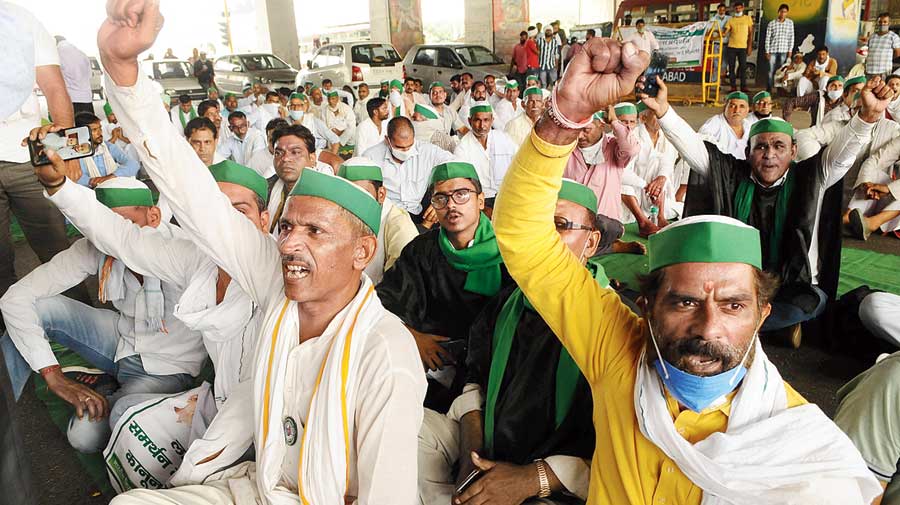 The Opposition on Monday registered its protest against the introduction of bills related to farm and banking sectors and even demanded a statement from the government on Chinese intrusion but the restrictions imposed under the Covid-19 protocol prevented them from creating a ruckus in the Lok Sabha.

Many Opposition members expressed helplessness as no MP is allowed even to stand up, leave apart running into the well of the House to forcefully make their point.

Congress leader Adhir Ranjan Chowdhury told The Telegraph: “We decided not to go to the well and strictly follow the protocol. But how long can we tolerate the government’s highhandedness? They can’t run Parliament only for government business; people’s concerns can’t be brushed aside.”

“We can’t be a mute spectator if the government passes one bill after another without discussion. We wanted an assurance on China but the government ignored (our pleas). We are deeply disturbed by the proposed changes in the farm sector; the government has conspired to help the corporate and hoarders while the farmers will be the loser. They want to usurp states’ powers. We hope the government doesn’t force us to create disturbances by unilaterally pushing their agenda,” Chowdhury added.

The Congress and other parties like the Trinamul opposed the introduction of bills intended to reform the agriculture sector but the government rejected their misgivings, saying the perception that the minimum support price (MSP) system will be abolished and this will lead to corporate takeover was completely erroneous.

Union agriculture minister Narendra Singh Tomar said the bills were totally a win-win situation for the farmers as it will expand the marketing opportunities.

Chowdhury, however, contested this claim, saying, “The lofty talk is not backed by evidence. They are not making any commitment that the two gains of green revolution — MSP and procurement system — will not be disturbed. They tried to sell even demonetisation as reform. That proved to be a disaster. And how can the Centre usurp states’ powers? They are practising coercive federalism while singing cooperative federalism. This new system will also hurt the consumers as removal of stock limit will allow the hoarders to manipulate prices.”

Introducing the three bills to replace the ordinances promulgated in June — The Farmers’ Produce Trade and Commerce (Promotion and Facilitation) Bill, The Farmers (Empowerment and Protection) Agreement on Price Assurance and Farm Services Bill and The Essential Commodities (Amendment) Bill — Tomar said, “Misconceptions are being created for political reasons. I appeal to the farmers not to be swayed by false perceptions.”