Faces in mirror held up by farmers’ protest 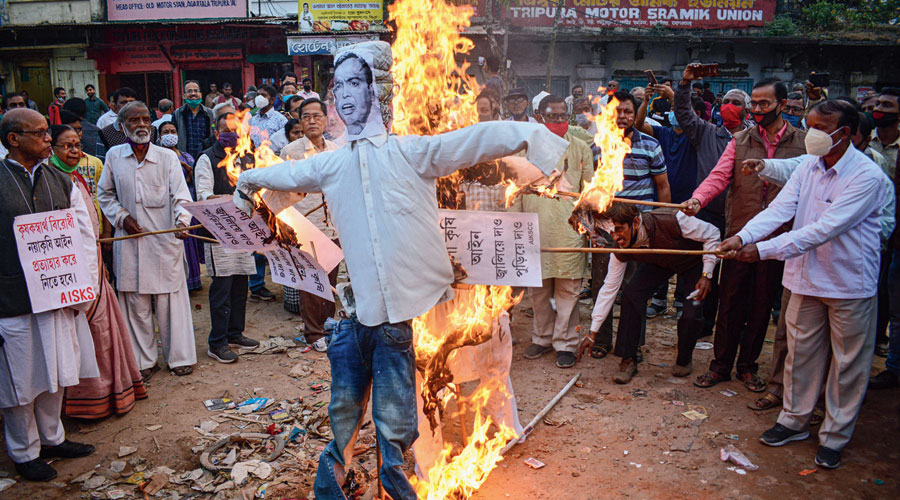 The decisive Battle of Plassey that gave the East India Company its foothold in India and established its rule was lost not for lack of battlefield valour but because of the treachery of a military general.

An African saying warns: “An army of sheep led by a lion can defeat an army of lions led by a sheep.”

The truth behind this saying is wider, and covers not only battlefields but many modern governments and democratic leaders. A wrong leader, a toxic ideology, foolish ambition or a false sense of grandeur can play havoc, cause unimaginable damage in a very short time. And then the country would take a long time to recover, if at all.

Examples abound in history. Hitler and Mussolini are still not too distant in memory. The irony of Stalin’s rule was that the Red Army defeated the Nazis but, at the same time, his policy of purges left the independent communist parties of Eastern Europe crippled, from which they never quite recovered.

It is now well documented that toxic policies promoted by the International Monetary Fund and embraced by its market-fundamentalist leaders sent Argentina, a country of vast natural resources, begging before the world.

Delusion combined with a toxic ideology is a recipe for disaster in any country. A negative rate of growth, an unprecedented recession and massive unemployment coexisting with a soaring stock market combined with such ideological priorities as banning cow slaughter and building a Central Vista to show the historic importance of a leader have been foretelling such a disaster.

But we woke up to the fact that the monster was at the door only when the farmers of the country showed us the mirror.

If you have not already deposited all your intelligence to the expert discussions and images of the mainstream media, you might ask, like in the fairy tale: “Mirror, mirror on the wall, show me who is behind it all”. And, the mirror would show not the obvious faces of the two most powerful politicians (both from Gujarat) of the ruling party in power, but two other faces, the two richest businessmen (again, both from Gujarat) of the country. No prize for guessing who they are. Both have been long time cronies of the current leader from his days as the chief minister of Gujarat.

However, it’s not merely “crony capitalism” that we are talking about. The three farm laws recently passed hastily in a moribund Parliament are no exception to the trend already set in a way. The government has done it repeatedly but the trend started earlier with blitzkrieg attacks that gave the public no time to react.

It started with the guerrilla attack of demonetisation and then the strategically bad implementation of the GST to weaken petty and small businesses and the states in our federal financial structure.

This was followed by the violent uprooting of the lives and livelihoods of migrant workers with the imposition of a most severe lockdown at four hours’ notice.

There was disquiet, discomfort and distress, but the public response was still not one of outrage. The illusion of the government fighting against black money (forget the promise of Rs 15 lakh in every Indian’s bank account) and valiantly imposing a lockdown against the looming pandemic still had some credibility with the trusting public.

But soon we all could not but see how the pandemic was being used as a cover to hollow out from within the essence of parliamentary democracy. A series of anti-labour and pro-corporate labour laws were passed, virtually without any prior notice or discussion.

Now the government has adopted the calculated move of bringing the three farm laws into effect, fearing little resistance inside or outside Parliament, again under the cover of a pandemic in a demoralised economy with negative growth and crushing unemployment where most are gasping for oxygen.

Briefly, the three laws are meant to dismantle the mandi (wholesale market) system and the minimum support price of agricultural commodities.

And — this is the point of general interest, often underemphasised by mainstream media — they are meant to do away with virtually all normal legal processes in case of disputes through the grant of unilateral power to the government. These laws transfer the power of settling disputes to the executive itself, with no role for the judiciary. The alleged culprit will judge the nature of the guilt, violating all notions of possible conflicts of interest in law.

Such a law was passed by our democratic Parliament hurriedly, demolishing not only farmers’ rights but threatening the rights of all Indian citizens.

The farmers rose against it. They rose to defend their rights and this has now become linked with the wider constitutional rights of all Indian citizens. India’s demoralised, impoverished majority has suddenly become aware of the serious danger that stares them in the face. The corporatisation of agriculture is a prelude to the corporatisation of the Indian democracy, of our constitutional rights.

Economists of the establishment are known not for their expert knowledge but for their irrelevant half-truths, couched in jargon. The cornerstone of their argument, made famous by Milton Friedman, is that a free democracy requires a free market. The farm laws have brought up the question: Is it a democracy where the executor is also the judge? Is that the new definition of a free democracy? And then, how free is a market where a small or marginal farmer faces Mr Ambani or Mr Adani in a bargain over price?

It is a badly kept secret of standard economic theory that the price mechanism does not work unless all buyers and sellers are price takers in the market. This means nobody has the market power to make prices. The high-powered general equilibrium theory had to invent a disinterested outside “auctioneer” like Voltaire’s God who would set and revise prices to get at the market clearing prices.

With all its imperfections and corruptions, the minimum support price is the closest we have to a price set by an “auctioneer”. The farmers want it enshrined as a law; the government is unwilling because it wants the corporations to set the prices, sooner rather than later, when the mandi system becomes dysfunctional under the new laws, with or without amendments.

This is the free market mechanism celebrated by mainstream economists, debated by so-called experts in the mainstream media, and financed by the big corporations. And in the meantime, Mr Ambani’s Reliance has its fingers on the retail market of agricultural produce and Jio will control all corporate online bulk purchases, while Mr Adani is busy extending his network of corporate transport and silos for storing agricultural commodities.

The government is understandably enthusiastic about the future of digital capitalism with 5G, which will be controlled by Jio in India. Is there any respite, any alternative route possible?

The farmers are showing how wrong we all were in our pessimism. Things change, but not always in the way a few plutocrats and their minions want, if ordinary people unite with all their usual frailties and force Opposition political parties to unite at least on this issue. (Otherwise, the Opposition parties want to have neither a clear pro-poor road map of development nor the courage to call the bluff of mechanised corporate agriculture as the El Dorado of the future.)

The farmers’ determined resistance has created the necessary circumstances. It is for us all to join boldly. It reminds one of the wisdom of a well known observation. Paraphrasing Marx, we might say: “Men (and women) create history, but not under circumstances of their own making, but already created.”

The circumstances have indeed been created by the valiant resistance of the farmers. The lion of the African proverb can still lead an army of sheep to defeat what looked once like an invincible enemy.

⚫ Amit Bhaduri is an economist. In January this year, Bhaduri gave up his status as professor emeritus at JNU in protest against the throttling of dissent on the campus