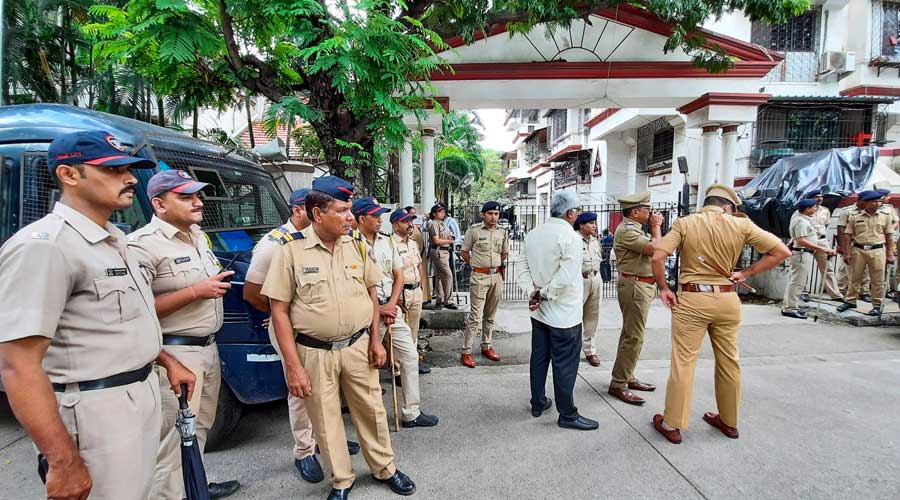 Dissident Shiv Sena leader Eknath Shinde on Saturday alleged that the Maharashtra government has withdrawn the security cover provided at the residences of 16 rebel legislators, including himself, and dubbed the action as "political vendetta".

Shinde, who is currently camping in Guwahati with the rebel legislators, tweeted a letter signed by the 16 MLAs that is addressed to Chief Minister Uddhav Thackeray and Home Minister Dilip Walse Patil.

The Shiv Sena has sent the names of the 16 rebel MLAs to the Maharashtra Assembly deputy speaker for initiating action of disqualification against them, a senior leader has said.

In the letter, the legislators said CM Thackeray and the leaders of the ruling Maha Vikas Aghadi (MVA) alliance will be responsible if any harm is caused to their family members.

In his tweet, Shinde alleged that the security cover of the 16 rebel Sena legislators was withdrawn on the orders of Thackeray and Walse Patil due to "political vendetta".

"The government is responsible for the security of these legislators," he added.

However, Walse Patil said the chief minister and the home department did not order the removal of security cover of any MLA in the state. ''Allegations being made through Twitter are false and malicious," he said, according to PTI.

In their letter, the legislators demanded that their security cover be reinstated.

"(Shiv Sena leader) Sanjay Raut has threatened us saying he would make it difficult for the MLAs who have left to return to the state and move around. The impact of these statements was borne by two of our members as their offices were vandalized by cadres of Shiv Sena merely after hours of withdrawing security of the MLAs," the letter added.

"If our family members are harmed, then the chief minister, leaders of the Maha Vikas Aghadi (MVA) government like Sharad Pawar, Sanjay Raut and Aaditya Thackeray will be responsible," the letter said.

The security cover, which is provided at their residence as well as to their family members as per the protocol, has been withdrawn illegally and unlawfully as an act of revenge, it said.

A legal battle looms with the Sena leadership moving to get 16 rebel MLAs, including Shinde, disqualified. The Sena believes that if Shinde is disqualified, it may trigger panic within the rebel camp, forcing the others to rethink.

Shinde too consulted legal experts in Guwahati and questioned the Sena’s move and deputy Speaker Narhari Zirwal’s authority to disqualify the rebels who are the bigger bloc.

Maharashtra doesn’t have a Speaker at present, with the deputy Speaker discharging the responsibilities. The deputy Speaker, who belongs to the NCP, is expected to help the government, and the rebels may be forced to seek redress from the courts.

Uddhav Thackeray has called a national executive meeting in Shiv Sena Bhavan at 1 pm on Saturday.

The Shiv Sena-Congress-NCP strategists believe the situation may change after the rebel group returns to Mumbai, with their ranks getting whittled down to 20 or 25 MLAs.

Sharad Pawar and other senior NCP leaders visited Uddhav’s residence, Matoshree, on Friday evening to discuss the strategy for the battle ahead.

Uddhav on Friday moved to firm up his hold on the party machinery, calling district chiefs and other office-bearers to an emotional interaction.

While his son Aditya met party workers at the Sena Bhavan, Uddhav addressed them through videoconferencing, describing how his own people had conspired against him while he was admitted to a hospital for spine surgery. The chief minister had had spine surgery late last year.

Asserting he was not playing a power game, Uddhav said: “These people want to break the Shiv Sena. They used to vow publicly that they would die but not leave the Shiv Sena, but they have run away.”

Although Uddhav didn’t attack the BJP, Aditya alleged that the rebel MLAs had been bought off with money. He said it was shocking that, when the Congress and the NCP had stood firm behind the Sena, the party’s own people had betrayed it.

Sena spokesperson Sanjay Raut has been attacking the BJP, claiming the fire it has ignited would singe its own hand.

Protests broke out on the ground after Uddhav’s interaction with party workers, with Sena cadres demonstrating against the rebels and attacking their offices.

Uddhav’s push to capture the organisation will put the rebels at a disadvantage because of their absence from the battleground. Even if they acquire the numbers to pull the government down, winning over the Sena cadre would be difficult for them.

Sena workers condemned those sitting in Guwahati as “traitors” and predicted that doing politics will become difficult for them.

The protests are likely to be escalated once the rebels return to Maharashtra. The objective is to lure away some of them to ensure that the rebel group does not have the numbers to escape the axe of the anti-defection law.

BJP in no hurry to form govt