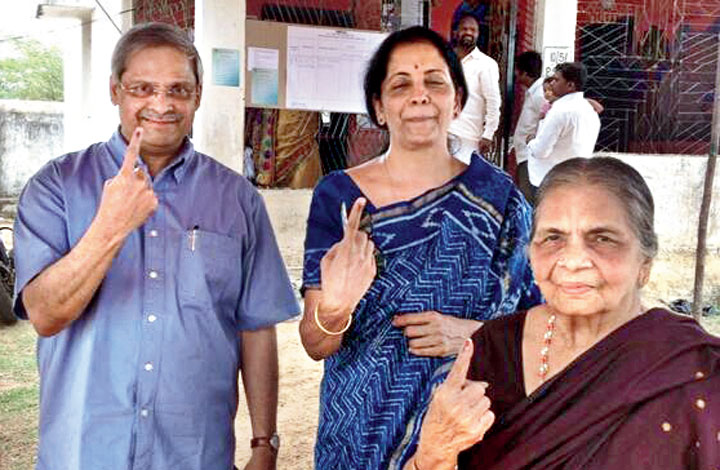 Parakala Prabhakar’s article in The Hindu generated social media curiosity, primarily because he was the finance minister’s husband, although the newspaper introduced him as a former adviser to the Andhra Pradesh government and managing director of RightFOLIO, a knowledge enterprise based in Hyderabad.

“Home front is always difficult to manage!” said one tweet, reacting to the article.

Another said: “Finance Minister @nsitharaman’s husband and political economist Parakala Prabhakar hits out at Modi Govt over slowdown, asks for embracing Rao-Manmohan Singh model. What will they call him? Tukde Tukde gang? Where will they send Him? Pakistan?”

Prabhakar’s article was polite in tone but scathing in content. He cited grim economic figures and said the government was in “denial” and was showing no signs that “it has come to grips with what ails the economy”.

“While the government is still in denial mode, data flowing uninterruptedly into the public domain show that sector after sector is staring at a seriously challenging situation,” he wrote.

“The party’s economic ideology and its articulation were limited to mainly critiquing the Nehruvian model from the fringes of the political spectrum. In economic policy, the party mainly adopted ‘neti neti (not this, not this)’, without articulating what was its own ‘niti (policy)’.”

Asked about her husband's article, Sitharaman politely countered it claiming that the government had under Modi’s leadership undertaken “fundamental reforms” between 2014 and now.

“If you talk of deep reforms, this government has taken many such steps,” she said, citing the goods and services tax, amendments to the Insolvency and Bankruptcy Code and the Aadhaar-linking of welfare schemes.

Prabhakar, however, highlighted that the BJP never fought elections on the plank of an “economic road map” and that the “economic direction the country needs to take” never figured as a “serious debate” in the party.

He said the Sangh-BJP’s avowed ideology of “integral humanism… cannot be rendered into practical policy initiatives in the modern market-driven, globalised world”.

While acknowledging the BJP’s potential difficulties in adopting a model associated with the Congress, he suggested the party do with Rao what it had done with Vallabhbhai Patel — co-opt him as a victim of the Nehru-Gandhi family.

“Sardar Patel, the Congressman the Gandhi dynasty marginalised, could become an icon in the BJP’s political project. Similarly Rao, another Congressman detested and humiliated by the dynasty, could become a robust underpinning for its economic architecture,” he wrote.

“Do we want a country where the husband and the wife need to hold the same views?” Shah told India Today TV.

He said the Opposition’s use of Prabhakar’s article to attack the government was a “cheap trick”, adding that the economy was healthy and was facing a few setbacks because of global factors.