Advertisement
Home / India / Down the pit, the price of the illicit

Down the pit, the price of the illicit

The Meghalaya coal mine disaster was a tragedy waiting to happen 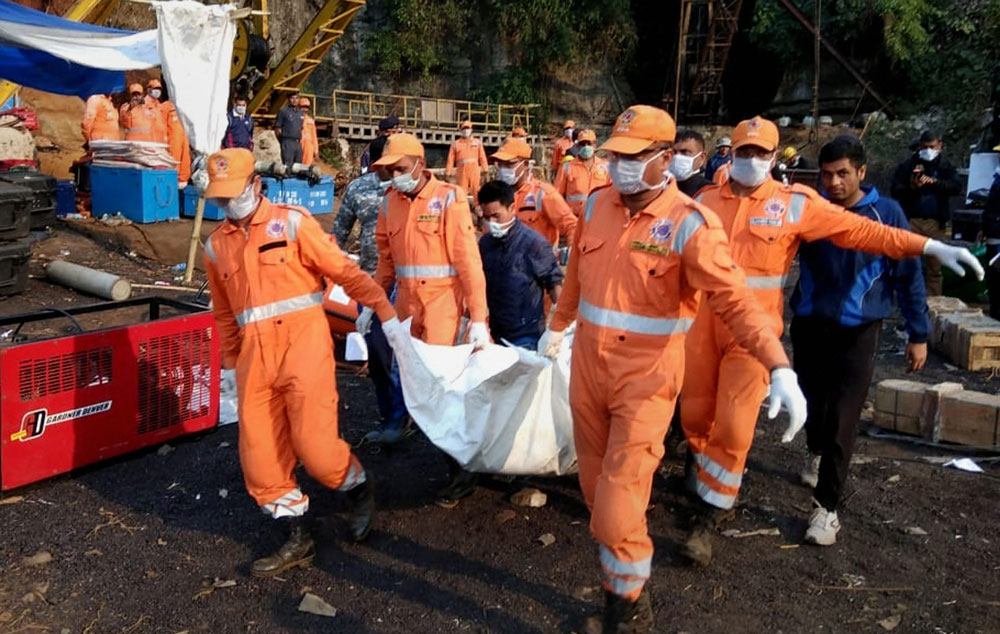 One body is all they have yet been able to recover. It is being billed as the country’s longest rescue operation and has the might of the Supreme Court behind it.

A highly trained squad — comprising 200 State Disaster Response Force (SDRF), NDRF, the Indian Navy, the Odisha fire service, Coal India and Kirloskar Brothers Limited with their high-power pumps — has been at it more than 60 days. Attempting the rescue of 15 miners who disappeared in a flooded Meghalaya coal pit. One body is all they have.

This is a journey with a layered narrative, the terrain and a desperate livelihood inextricably linked. The route meanders through the green, rolling Khasi Hills till the landscape alters, gradually turning rugged, the road disappearing into a dirt track. From East Khasi Hills to West Jaintia Hills and then onto East Jaintia Hills, one can take a break at Lad Rymbai, the biggest commercial hub in East Jaintia Hills, before heading to Lad Sutnga, through villages big and small.

As the vegetation recedes, the long, deserted stretches, eerily silent, start to get punctuated by men repairing and black-topping roads. Closer to Ksan, the site of the coal mine where the miners have been trapped since December 13, a change of vehicle for a four-wheel drive is necessary to negotiate the last four kilometres of dilapidated track. The adventure includes crossing the Lytein river, whose waters were initially suspected to have flooded these mines, thrice. Yet the miners risk life and limb to reach this remote crevice to eke out a living.

One of the five miners who clambered to safety that cold December day, Sayeb Ali, a resident of Assam, and three others who were from Lumthari, a neighbouring village, sounded the alert about their co-workers being stranded in the flooded mine and their relatives arrived in search of them. Rescue work began on a tardy note, with NDRF personnel arriving from Guwahati on December 14.

Inclement weather — coupled with the obstacles of deciphering the bottom of a 400-foot flooded mine with basic tools — didn’t help either.

Meghalaya’s rat-hole coal mines (so called because of the narrow tunnels, just enough for a single worker to manoeuvre). The illegal activity has continued, with governments past and present — now involved in the inevitable blame game — perennially in denial about such clandestine mining despite periodic recovery of bodies of those who clamber in to surreptitiously chip out coal.

How important is illegal coal mining in Meghalaya? The answer may be in legislators' assets

A lull in the rescue bid around Christmas in the Christian-majority state prompted advocate Aditya N. Prasad to move the Supreme Court, seeking immediate steps to rescue the trapped miners. Once the apex court took up the matter, pumps were organised and nearly 200 rescue personnel started the interminable process of dewatering the flooded mines. In fact, the court reprimanded the Centre, which had volunteered aid to rescue a young team of footballers stranded in a flooded cave in Thailand, for being perfunctory in its efforts on Indian soil.

Since then, millions of litres of water have been pumped out (on February 3, a pump of Coal India discharged 48,60,000 litres of water from an old shaft while a pump of the Kirloskar Brothers Limited, which operated for 24 hours discharged 28,80,000 litres from another shaft) but the level of water in the affected mine barely recedes a few inches. Experts are confounded by the source replenishing the pumped out water.

A remotely-operated vehicle (ROV) of the navy detected the first body, that of Amir Hussain from Assam’s Chirang district, on January 16. It was finally retrieved on January 24, decomposed and dismembered, and his family could identify him only from the two amulets he wore. On January 26, the ROV detected a second body. But it is yet to be recovered.

Early last week, the Supreme Court bench met to consider fresh directions to the Centre to expedite the process of retrieving the bodies of miners but the hearing was stymied by the absence of the solicitor-general. On Friday, a bench comprising Justice A.K. Sikri and Justice Abdul Nazeer asked the central and state authorities to requisition the services of 15 100HP Kirloskar to continue with the rescue operations.

Although coal mining began to flourish in the Jaintia Hills in the Seventies, the area has a history of extraction since the British era, from as far back as 1815. It was subsequently discontinued because of topographical challenges in transporting the extracted mineral and resumed on a commercial scale in the latter half of the 20th century, with private landowners unearthing the coal seams.

The land laws of Meghalaya, which got statehood in 1972, is distinct from the rest of the country. As the hill state comes under the purview of the Sixth Schedule of the Constitution, the residents, not the government, have control over land and its resources.

Thus there are coal barons aplenty and migrant labour has thrived in the mining sector because it is both cheap and easily available. However, of those still feared trapped, not all are migrants — three are from the neighbouring Lumthari village, seven from Rajabala in West Garo Hills district and five, including Hussain, from Assam.

On a rough estimate, East Jaintia Hills district alone is believed to have over one lakh coal mines and as recently as January 9, its Miners and Dealers Association held a rally to highlight the need to legalise coal mining. The stakes are so high that in November, a woman activist, Agnes Kharshiing, and her friend, Amita Sangma, were almost killed by a coal depot’s workers when the former was taking photographs of trucks carrying coal that was obviously illegally mined. To those raking in the moolah, legally or otherwise, miner casualties are just a professional hazard.

In his latest bulletin on the rescue operation, the official spokesman for the district, Reginald Susngi, said the navy’s remotely-operated vehicle could not detect anything inside the mine since February 2 because of excessive turbidity. Personnel of Kirloskar Brothers Limited have, therefore, for the time being stopped pumping out water.

It is now almost certain that the rescue mission is only a salvage operation to retrieve bodies. The relatives of the trapped miners, who have been paid interim ex gratia by the Meghalaya government are awaiting the bodies, in a manner reminiscent of the protagonists in J.M. Synge’s Riders to the Sea. Like the fishermen of the Aran Islands, who venture into the sea never to return, the fate of the miners appears sealed. Just as Nora in Synge’s play says with typical Celtic keening, “Herself does be saying her prayers half through the night, and Almighty God won’t leave her destitute with no son living,” there is the poignancy of Greek tragedies in the kin waiting at the mouth of the Ksan cave. For them, clinging on to the faintest thread of hope, the Supreme Court’s Justice A.K. Sikri’s directive to the rescuers: “Keep trying, miracles do happen,” must be the most enduring commandment.

The secret institutional support for illegal mining must be addressed 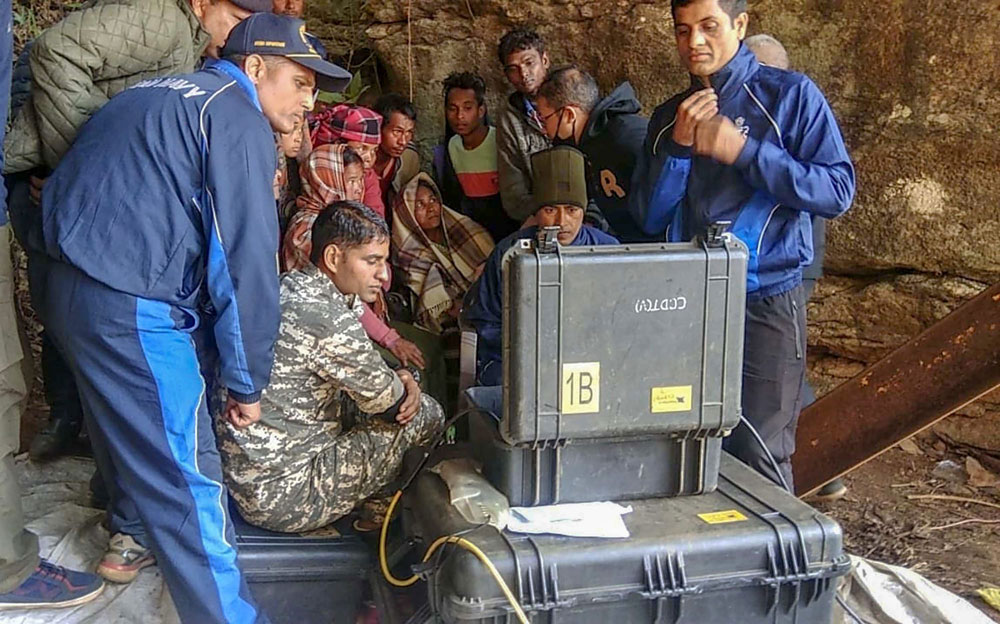