In an open letter, Narendra Singh Tomar accuses Congress-led opposition of spreading falsehood, asks farmers to be on alert 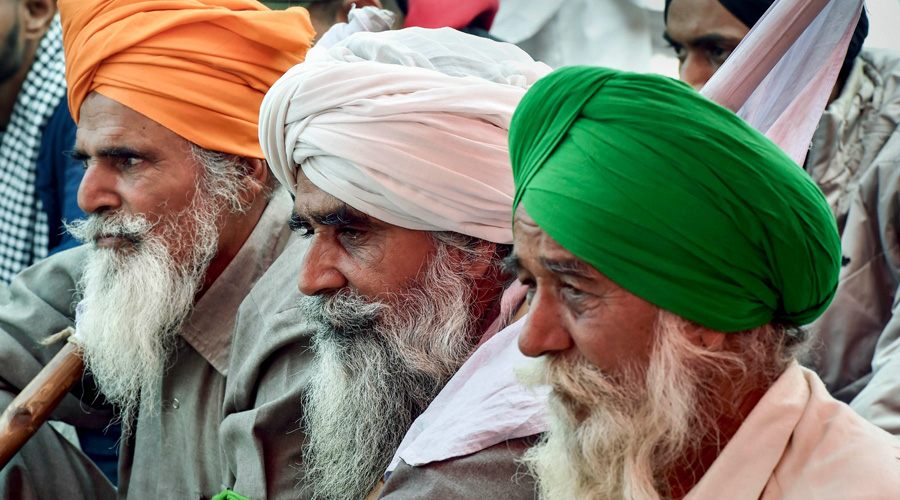 The minister, in an eight-page open letter to farmers, said the Modi-government was committed to their welfare
PTI File picture
Our Bureau And Agencies   |   New Delhi   |   Published 17.12.20, 11:00 PM

Accusing the Congress and other opposition parties of spreading falsehood about the new farm laws, union agriculture minister Narendra Singh Tomar on Thursday appealed to the agitating farmers not to fall prey to these “white lies” and said the Centre was ready to address all their concerns.

In an apparent attack on the left parties, the minister said they were still speaking the language they used in 1962 when India went to war with China.

The minister, in an eight-page open letter to farmers, said the Modi-government was committed to their welfare and stressed that the new legislations were aimed at benefiting small and marginal farmers.

Assuring that the minimum support price (MSP) will continue and the existing mandi system will be strengthened, the minister appealed to the farmers to dismiss “white lies being spread by politically motivated people”.

Tomar, who is leading the negotiation with about 40 farmer unions along with Food Minister Piyush Goyal and Minister of State for Commerce Som Parkash, asserted that there were no provisions in these laws for corporate firms to take control of farmers’ lands.

“Many farmers’ unions have supported farm laws. But some farmer groups have created confusion. Being an agriculture minister, it is my duty to remove misconceptions and address concerns of every farmer. It is also my duty to expose the conspiracy being hatched around Delhi and present the truth and facts before you,” he said in the letter.

Thousands of farmers, especially from Punjab and Haryana, have been protesting at Delhi’s borders against the Farmers (Empowerment and Protection) Agreement of Price Assurance and Farm Services Act, 2020; the Farmers Produce Trade and Commerce (Promotion and Facilitation) Act, 2020; and the Essential Commodities (Amendment) Act 2020.

At least five rounds of formal talks have been held between three Union ministers and 40 farmer unions to break the deadlock. The unions, however, are demanding complete roll back of the central laws. Last week, the Centre had sent a proposal to these unions, stating that it would give a written assurance that the MSP system will remain and also redress their other key concerns.

In the open letter, Tomar highlighted that the government in the last six years has taken various measures to boost farmers' income and make the agriculture sector profitable, including cash transfers under the PM-KISAN scheme and Rs 1 lakh crore agri-infrastructure fund.

Stating that about 80 per cent of Indian farmers are small with landholdings of 1-2 acres, Tomar said these three laws will benefit them as it gives them freedom to sell their produce outside the APMC mandis.

“It is imperative to understand the conspiracy being hatched by some political parties and organisations. It is unfortunate for the country that some intellectuals, claiming to be neutral, are shamelessly speaking contrary to their earlier positions,” he said.

Tomar said he wondered how the Congress government, which did not implement the Swaminathan panel report for 8 years, has started talking about welfare of farmers. He said the Congress in its election manifesto had talked about providing alternative avenues for the sale of farm produce.

He also attacked the AAP and Akali Dal for change of their stance with regard to reform in the agriculture marketing system.

Tomar also criticised some farmer unions, who had earlier welcomed these new laws but now have joined the protests.

The minister cautioned the farmers about the entry of people and organisations that have nothing to do with farming and are “trying to spread anarchy and fuel discontent”.

Such elements, he said, were taking advantage of the farm agitation to pressurise the government to release people accused of spreading violence from prison.

He said some people even desecrated the statue of Mahatma Gandhi in the name of farmers’ protest.

The minister said people should understand the motives of those persons who are asking consumers to boycott products of domestic companies at a time when the country was moving towards becoming self-reliant following the government’s call for ‘vocal for local’.

Tomar said the people who stopped trains from carrying supplies for army personnel deployed in Leh and Ladakh cannot be called as farmers.

The government had to spend taxpayers' money on transporting supplies to the army through air and other modes, he added.

Farmers should ponder what was the aim when they started the agitation and what is being talked about now, he said.

“Through this letter, I appeal to farmers with folded hands not to fall prey to any falsehood and think on a factual basis only,” the minister said, while asserting that these new laws would lay the foundation of a new chapter to strengthen farmers.