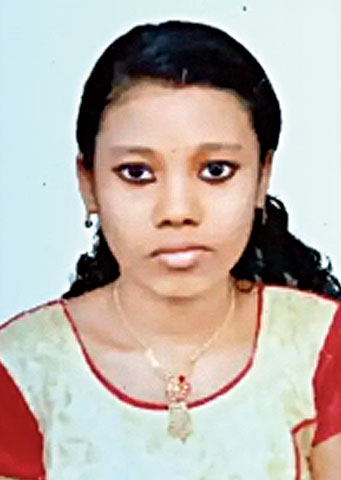 A 14-year-old school student purportedly committed suicide in Kerala after her daily wage-earner father, blighted by ill health and lack of work during the lockdown, failed to repair the TV on which she was to attend virtual classes that began on Monday.

The charred remains of Devika Balakrishnan, described as a bright student by police, were found in front of an abandoned house near her home at Valanchery in Malappuram district on Monday evening.

The parents of the Class IX student have told the police that she had been missing since 3.30pm. Her body was found by neighbours around 6pm.

The police said a suicide note found in her room said “I am going”. The police did not divulge if Devika had written anything more.

Her father Balakrishnan, a daily wage worker who has hit rough times due to poor health and the pandemic-induced lockdown, told the police that his daughter had been asking to repair their TV to watch the classes that were being broadcast.

“I neither had money to repair our TV nor a smartphone for my daughter to attend her classes,” said a sobbing Balakrishnan.

The government started the new academic year on Monday with virtual classes produced by the state-run Kerala Infrastructure and Technology for Education (Kite). While the Kites Victers channel is broadcast on almost all television networks, the video capsules of tutorials are also being streamed on the Kite website, Facebook and YouTube.

Devika’s grandmother Kali told reporters that the girl had been sad as she could not take part in the virtual classes.

Education minister C. Raveendranath has ordered a probe by the district education officer on the circumstances that led the girl to commit suicide.

He told reporters that the education department had conducted a survey of students who did not have access to TV or the Internet.

“We have introduced neighbourhood classrooms (in libraries, community halls and houses donated by people owning more than one) for children who don’t have the required facilities at home,” he said.

Devika, whose area is yet to get such infrastructure, had been registered in the list of 2 lakh students in Kerala who didn’t have TV or Internet at home.

The education department is in the process of distributing 1.2 lakh laptops, 7,000 projectors and 4,545 television sets to help impoverished students attend the virtual classes.

Raveendranath said the classes underway were only being run on a trial basis. “I request the students not to worry. The actual classes will begin in the second week when all these classes will be broadcast again for the benefit of those who missed out,” he said.

The Opposition slammed the Left Democratic Front government for not providing facilities to the poor students.

“Not all students will have TV or Internet at home. The government should make arrangements for them to attend the virtual classes,” said the leader of the Opposition, Ramesh Chennithala of the Congress.

The purported suicide has triggered massive protests by student organisations of the Congress and its ally the Indian Union Muslim League.

While Youth Congress workers tried to lay siege to the office of the education department in Thiruvananthapuram, a march by the Muslim Students’ Federation to the education office in Malappuram prompted a police lathicharge.

Actress Manju Warrier has offered to donate five TV sets. Screenwriter B. Unnikrishnan has pledged an unspecified number of sets.