'Reading down anti-terror law UAPA may have pan-India ramifications' 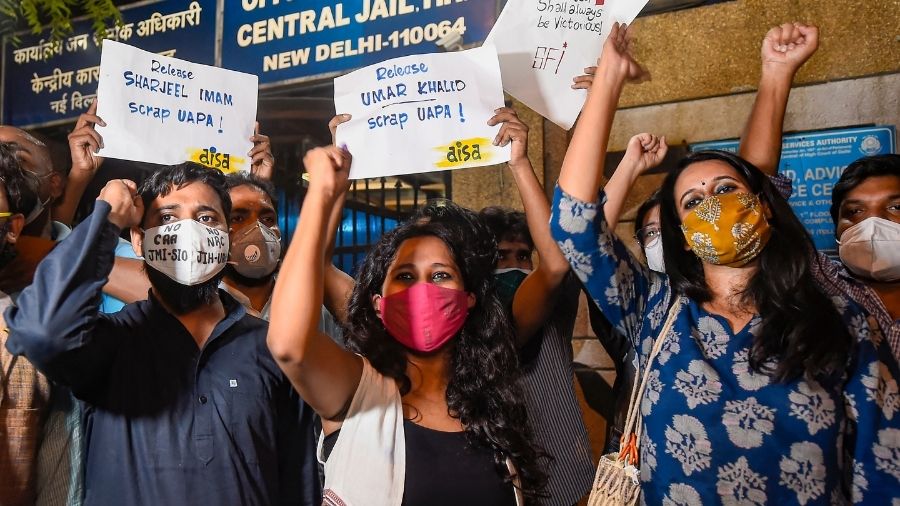 Reading down of anti-terror law is an important issue and may have pan-India ramifications, the Supreme Court said on Friday and sought responses from three student activists granted bail by the Delhi High Court in north-east Delhi riots case.

The high court judgements will "not to be treated as precedent by any Court" to give similar reliefs, the apex court said while hearing Delhi Police appeal against the bail.

A vacation bench of Justices Hemant Gupta and V Ramasubramanian made it clear however that the bails granted to these student activists will not be affected for the time-being.

Taking note of Solicitor Generak Tushar Mehta's submission that the entire anti-terror law, UAPA, has been turned upside down by the Delhi High Court while granting bail to these activists, the bench said what is troubling it was that 100 pages of the verdict have been rendered while granting bail and judgement discussed the entire law.

The Supreme Court was hearing three separate appeals filed by the police who have said the high court’s findings were “perverse and contrary to record” and appeared to be based “more on the social media narrative”.

The Delhi Police had said that: “We are proceeding with the filing of a special leave petition (to appeal) before the honourable Supreme Court.”

Lawyer B. V. Balram Das, acting for the police, added the fact that “the High Court has commented on facts outside the jurisdiction of the bail plea... will impact every National Investigation Agency (NIA) investigation under the UAPA (Unlawful Activities (Prevention) Act).” according to ANI news agency quoting what it said were police officials familiar with the case.

Three student anti-CAA protesters whose release on bail had been stalled over technicalities were set free on Thursday evening after a court, on the prodding of Delhi High Court, said that address verification could not be a plausible reason for continued imprisonment.

Natasha, Devangana and Asif — in jail since April last year and booked under a host of charges, including the anti-terror law UAPA — walked free around 7.30 pm.

The Delhi High Court had on June 15 granted bail to JNU students Natasha Narwal and Devangana Kalita and Jamia student Asif Iqbal Tanha saying that in an anxiety to suppress dissent the State has blurred the line between right to protest and terrorist activity and if such a mindset gains traction, it would be a "sad day for democracy".

It had said, "... that in its anxiety to suppress dissent and in the morbid fear that matters may get out of hand, the state has blurred the line between the constitutionally guaranteed ‘right to protest” and “terrorist activity.” The two-man bench went on to add that: “If such blurring gains traction, democracy would be in peril.”

The high court, in three separate judgments, set aside the trial court's orders denying bail to student activists and allowed their appeals by admitting them to regular bail on furnishing a personal bond of Rs 50,000 each along with two sureties of the like amount.