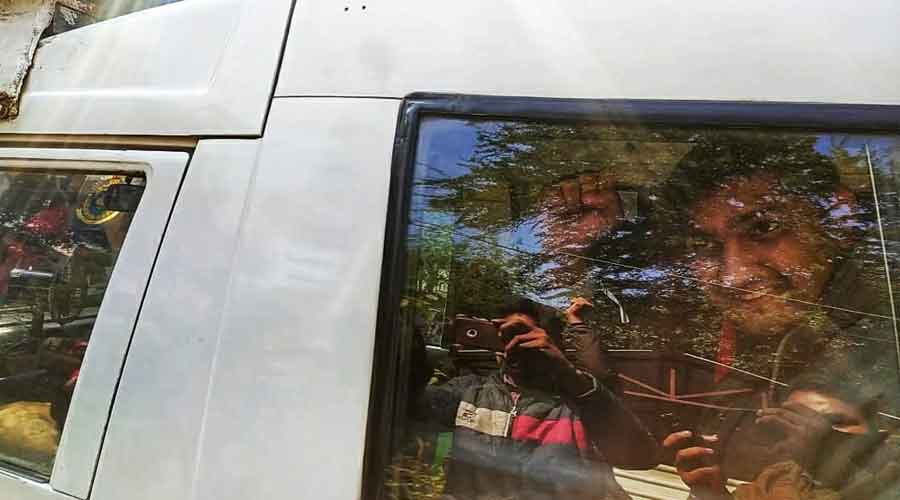 Delhi police on Sunday arrested freelance journalist Mandeep Punia who had in a Facebook Live session on Friday accused BJP workers of posing as local people and unleashing violence at the farmers’ protest site on the Singhu border.

The police had detained Punia on Saturday night, saying he had tried to dismantle barricades at Singhu and misbehaved with security personnel.

A video has emerged purportedly showing a group of policemen shoving Punia and dragging him away.

The FIR says Punia was arrested for his “misbehaviour” with a station house officer at the Singhu border.

Sitting in a police jeep on Sunday afternoon, Punia chanted “Free Press” as he was being taken to court. He has been remanded in judicial custody for 14 days.

Punia had posted a video on Facebook giving a personal account of the violence at Singhu. He said mobs chanted anti-farmer slogans and threw stones at the protesters in the presence of policemen.

A group of 150-200 people had stormed the Singhu protest site on Friday amid heavy security, hurled stones at the farmers and vandalised some of their tents.

While members of the mob claimed to be “local residents”, the farmers alleged they were BJP supporters.

Punia, a regular contributor to The Caravan magazine, had been on assignment to cover the farmers’ protest at the Singhu border on Friday.

Rahul Gandhi on Sunday shared a video that shows Punia being detained by the police and tweeted in Hindi: “Those who fear the truth arrest true journalists.”

The Indian Women’s Press Corps, Press Club of India and the Press Association condemned the police’s use of “brutal force” against Punia and demanded his immediate release. They said that no journalist should be disturbed while carrying out their duties at any place.

“Delhi police used brutal force while picking up Mandeep and did not share his whereabouts to other media colleague entire night,” a joint statement said.

“Mandeep has been reporting on the present farmers’ agitation right from the beginning and his arrest is part of the government crackdown on journalists to prevent them from doing their job independently and freely.

“Such crackdowns impinge on the media’s right to report freely and interferes with our right to freedom of expression, and freedom of the press as guaranteed by the Constitution of India.”

Another journalist, Dharmendra Singh, was picked up on Saturday night from the Singhu border. Police sources said he was released later in the night after he showed his press identity card. Officers wouldn’t say why he had been detained.