The lawyers argued that NCW and DCW had shown “inaccurate and improper understanding of the issue”, considering that the woman officer had not filed a complaint 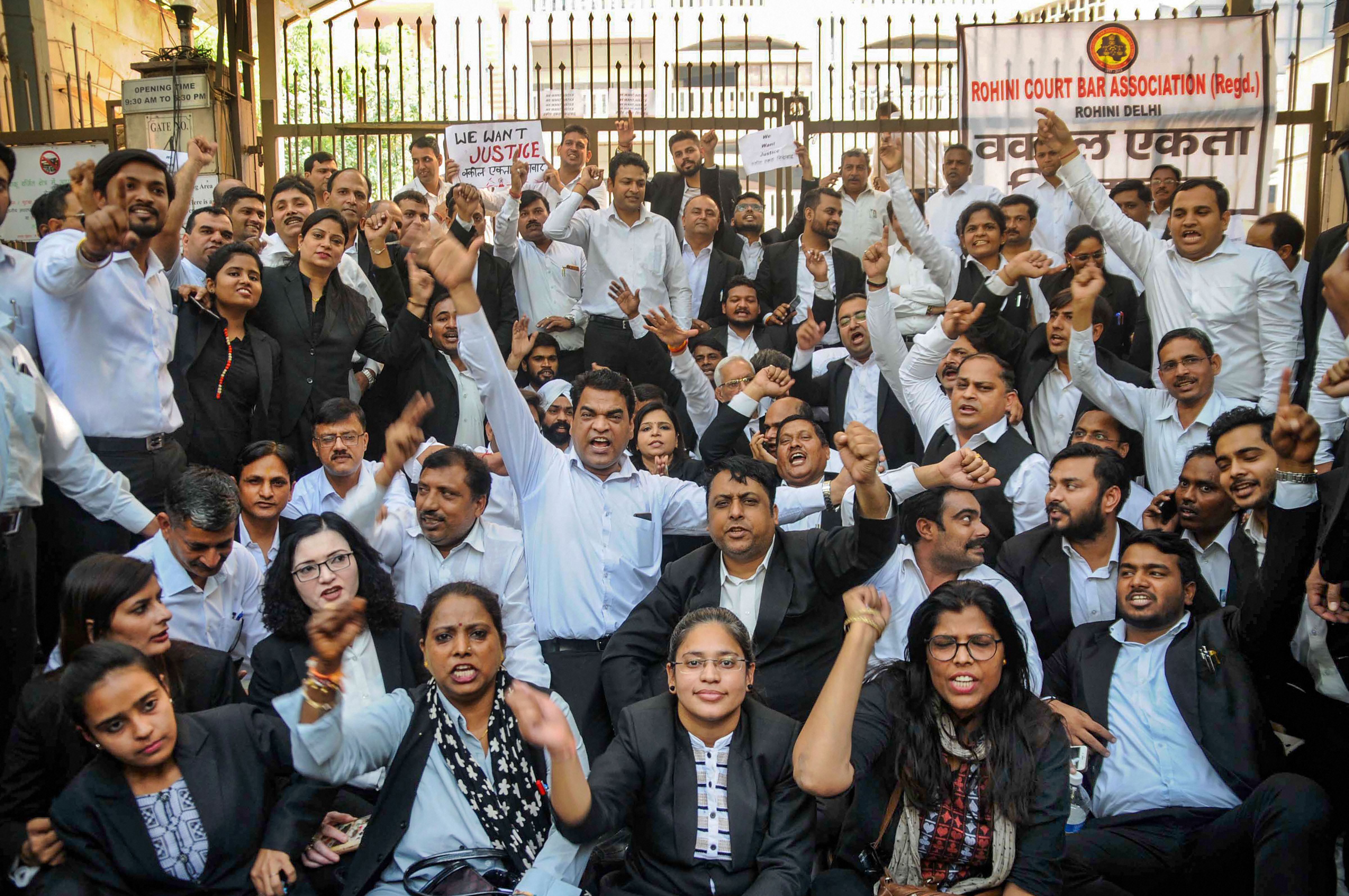 Advocates on November 6 protest outside Rohini court against the clash between lawyers and the police in the Tis Hazari Court complex in New Delhi.
PTI file photo
|   New Delhi   |   Published 12.11.19, 08:36 AM

The lawyers said their letters to the Bar Council of India chairman and joint commissioner of police, central range, was a case of “blatant over reach” of the jurisdiction of the Delhi High Court in the November 2 police-advocate clash at the Tis Hazari court.

The lawyers Mohit Gupta, Utkarsh Singh, Shashi (high court), Mithilesh Jaiswal, Narvinder Thakran (district court) and Shovit Singh (Supreme Court) issued the notice to the women's bodies on November 9, saying that hey wrote to the Bar and the police despite a judicial inquiry by the high court being under way on the clash.

The lawyers argued that the two bodies had shown “inaccurate and improper understanding of the issue”, considering that the police officer at the centre of their letters had herself not filed a police complaint yet. “The said woman officer, who cannot make a complaint for herself, cannot be found deserving to be an IPS officer assuming upon herself the giant task of security and justice for the lakhs of citizens under her jurisdiction. The commission has seriously erred in not issuing a notice to the said woman officer seeking her reply for making allegations without there being supporting complaint,” the contempt notice read.

In a letter dated November 8 to the bar council chairman, Manan Kumar Mishra, the NCW sought action against the “frenzied mob” that attacked a woman police officer during the November 2 violence inside the Tis Hazari court complex.

Similarly, the DCW wrote to the joint commissioner of police, asking whether an FIR was lodged and whether the accused had been identified in the incident of the mob “assaulting” the woman officer of deputy commissioner rank.

The lawyers in their notice held the suo motu cognizance of the incident by the two bodies to be in contempt of the high court and asked them to withdraw their letters in seven days. If they do not, the women's bodies will be subject to “appropriate proceedings” in court.

In a video clip that emerged a few days after the November 2 incident, the woman officer was seen being chased away by the mob of lawyers after trying to stop them.

The lawyers wrote that the commissions were “unreasonably and unequally” in contempt of the court as they did not issue the same letters in the case of a lady advocate, who filed a police complaint of molestation during the same incident.

“It is a professional assignment. Legally since matter is sub-judice, parallel inquiries through suo-motu cognizance by women's commissions at state and national level is not permissible and shows gross over reach and disrespect against/towards the High Court and are a mark of contempt. It is hopeful that intentions of commissions are not infested with motives other than public interest,” Mohit Gupta, one of the lawyers issuing contempt notice, told this website.