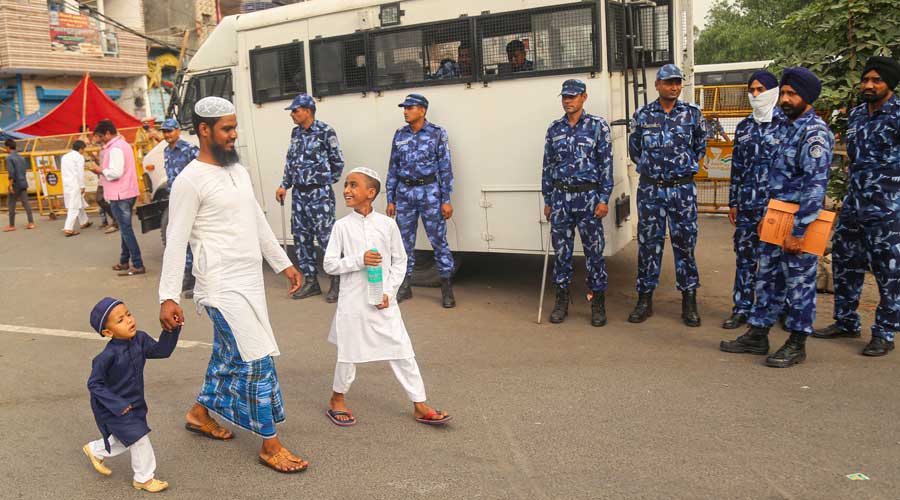 Hindu and Muslim communities together celebrated Eid on Tuesday at Jahangirpuri's Kushal Chowk by exchanging sweets and hugs, giving a message of peace and harmony in the area that witnessed communal violence last month.

The locals also treated the security personnel deployed there to sweets.

"Last month was quite tough for the people of Jahangirpuri. Today, on the occasion of Eid, we gathered at Kushal Chowk. We exchanged sweets and hugged each other and sent a message of harmony and peace. This shows people in Jahangirpuri live in harmony and respect each other's religions," a representative from the Muslim community Tabrez Khan said.

Khan expressed hope that full normalcy will return in the area soon.

"The situation is improving. Normalcy has returned to a large extent and we are expecting complete normalcy in the coming days," he said.

Police said they have ensured adequate security arrangements on the occasion of Eid.

Usha Rangnani, Deputy Commissioner of Police (Northwest) said, "We have adequate security and law arrangements put in place across the district. Aman Committee meetings have been conducted as always to maintain peace and tranquillity in all the areas."

Meanwhile, shops in and around Kushal Chowk--except for the main lane in Block C where a mosque is located--- have reopened.

Hawkers and customers have also returned for business.

Indramani Tiwari, the president of the Residents' Welfare Association, who represented the Hindu community, said Eid is being celebrated in a peaceful manner.

"We are celebrating Eid together and expecting this harmony to remain among the people. There is peace in the area and we expect complete normalcy soon," Tiwari said.

Clashes broke out between the two communities during a Hanuman Jayanti procession in Jahangirpuri, in which eight police personnel and a local resident were injured.

A week after the violence, Hindus and Muslims had together taken out a 'Tiranga Yatra' in Jahangirpuri's C block - the epicentre of the April 16 clashes - giving a message of peace and harmony.