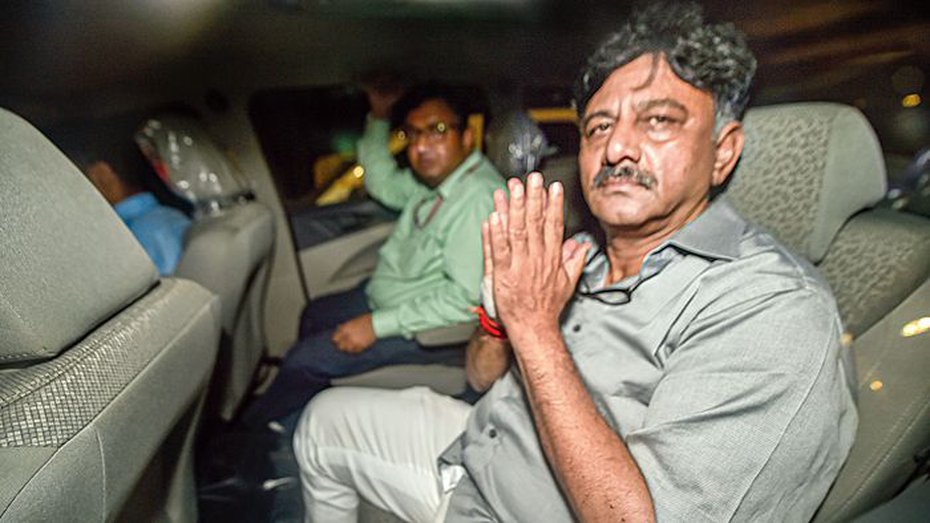 A Delhi court on Tuesday extended till October 15 the judicial custody of Karnataka Congress leader D. K. Shivakumar, arrested in a money laundering case by the Enforcement Directorate, and allowed the probe agency to quiz him in jail.

The court also granted permission to the ED to quiz him in Tihar jail, where he is lodged, on October 4 and 5 after ED's special public prosecutors Amit Mahajan, N. K. Matta and Nitesh Rana said that Shivakumar could not be quizzed properly since he had to be admitted to the hospital due to various ailments.

Senior advocate Dayan Krishnan, appearing for Shivakumar, said the accused had no opposition to the applications.

'Even if on bail, I (accused) am willing to cooperate at any extent,' he said.

The court had on September 25 declined to grant Shivakumar bail noting that he was an influential person and if released, he may influence the witnesses or tamper with the documents.

The ED had in September last year registered the money laundering case against Shivakumar, Haumanthaiah, an employee at the Karnataka Bhavan in New Delhi, and others.

The case was based on a chargesheet filed by the Income Tax Department against them last year before a special court in Bengaluru on charges of alleged tax evasion and 'hawala' transactions worth crores.

The I-T department has accused Shivakumar and his alleged associate S. K. Sharma of transporting huge amount of unaccounted cash on a regular basis through 'hawala' channels with the help of three other accused.