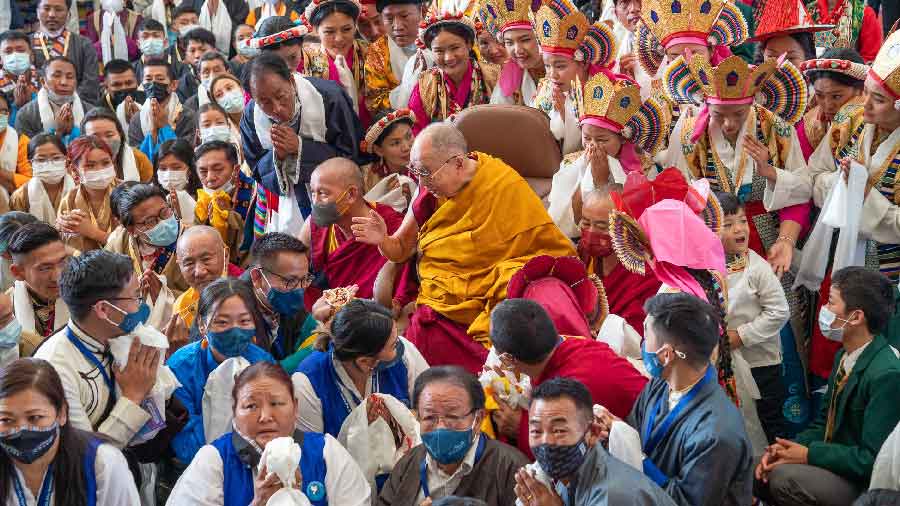 The Dalai Lama is likely to visit Jammu and Ladakh next week as part of a two-day tour even as India on Thursday rejected China's criticism over Prime Minister Narendra Modi's birthday greetings to the Tibetan spiritual leader, asserting that it is a consistent policy to treat him as an honoured guest of the country.

External Affairs Ministry Spokesperson Arindam Bagchi said that the birthday greetings by the prime minister to the Dalai Lama on Wednesday should be seen in the overall context.

Separately, sources said that the Dalai Lama is set to visit Jammu on July 14 and Ladakh the following day.

It will be the Tibetan leader's first visit outside Dharamshala in the last two years and expected to rile China further as it comes amid the lingering military standoff between Indian and Chinese troops in several friction points in eastern Ladakh.

"It is a consistent policy of the government of India to treat His Holiness Dalai Lama as an honoured guest in India and as a respected religious leader who enjoys a large following in India," Bagchi said at a weekly media briefing.

The external affairs ministry spokesperson was responding to questions on the Chinese reaction over Modi's greetings.

"His Holiness is accorded all due courtesies and freedom to conduct his religious and spiritual activities in India. His birthday is celebrated by many of his followers in India and abroad," Bagchi said.

"The birthday greetings by the prime minister to his Holiness on his 87th birthday should be seen in this overall context," he said, noting that Modi greeted him last year as well.

It is not known whether the issue figured in the talks.

Chinese Foreign Ministry spokesman Zhao Lijian told a media briefing in Beijing that "the Indian side should fully recognise the anti-China separatist nature of the 14th Dalai Lama".

It should abide by its "commitment to China, speak and act prudently and stop using Tibet-related issues to interfere in China's internal affairs", Zhao said.

In her brief address at the event, Lekhi said the Dalai Lama is someone who talks about India as a great civilisational force and that he adopted the country as his mother.

After a failed anti-Chinese uprising in 1959, the 14th Dalai Lama fled Tibet and came to India where he set up a government-in-exile.

The Chinese government officials and the Dalai Lama or his representatives have not met in formal negotiations since 2010.

Beijing has in the past accused the Dalai Lama of indulging in "separatist" activities and trying to split Tibet and considers him as a divisive figure.

However, the Tibetan spiritual leader has insisted that he is not seeking independence but "genuine autonomy for all Tibetans living in the three traditional provinces of Tibet" under the "Middle-Way approach".