While no loss of lives was reported in Odisha, the “very severe” cyclonic storm left a trail of destruction in Gajapati and Ganjam districts 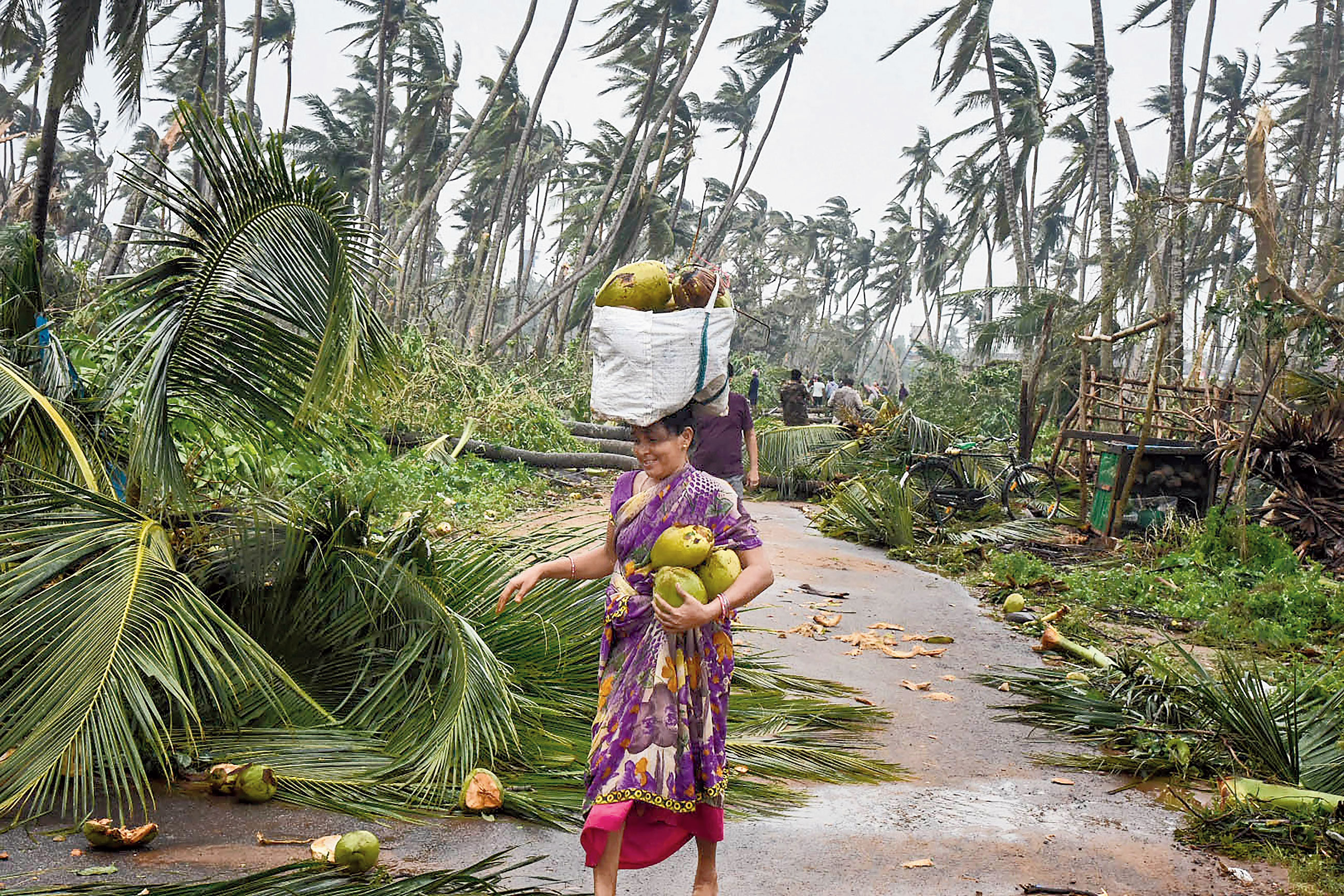 A woman carries away green coconuts strewn on the ground after the cyclone felled trees in Barua village of Srikakulam on Thursday.
(PTI)
PTI   |   Bhubaneshwar   |   Published 11.10.18, 10:36 PM

Cyclone Titli made landfall on the eastern coast early on Thursday claiming eight lives and wrecking havoc in Andhra Pradesh’s Srikakulam and Vizianagaram districts and cutting a swathe through neighbouring Odisha.

While no loss of lives was reported in Odisha, the “very severe” cyclonic storm left a trail of destruction in Gajapati and Ganjam districts, uprooting trees and electric poles and damaging huts.

According to the India Meteorological Department (IMD), Cyclone Titli made landfall near Palasa in Srikakulam district, southwest of Gopalpur in Odisha, with an estimated maximum sustained surface wind speed of 140-150kmph gusting to 165 kmph between 4.30am and 5.30am.

The Andhra Pradesh State Disaster Management Authority (SDMA) said the cyclone caused extensive damage in Srikakulam and Vizianagaram, and threw life out of gear as heavy to very heavy rain lashed the two coastal districts in the north since late Wednesday night.

While a 62-year-old woman died at Gudivada Agraharam village after a tree fell on her, a 55-year-old man died in a house collapse at Rotanasa village in Srikakulam, the SDMA said.

The Andhra Pradesh chief minister’s office said the six others killed were fishermen who had ventured into the sea.

Of the 67 fishing boats that had gone into the sea over the last few days from Kakinada in East Godavari district, 65 had returned, the CMO said, adding efforts were on to bring back the remaining two.

Srikakulam’s roads bore the brunt of the storm and over 2,000 electric poles were uprooted.

The Eastern Power Distribution Company, which caters to the electricity needs of the north coastal districts of Andhra Pradesh, reported that the distribution system for 4,319 villages and six towns in Srikakulam had been affected.

“Trees and electric poles have been uprooted and huts damaged in Ganjam and Gajapati districts,” he said.

According to East Coast Railway sources, train services between Khurda Road in Odisha and Vizianagaram in Andhra Pradesh were suspended since 10pm on Wednesday.

“We are optimistic about restoration of train services on the route by (Thursday) evening,” said East Coast Railway chief PRO J.P. Mishra.