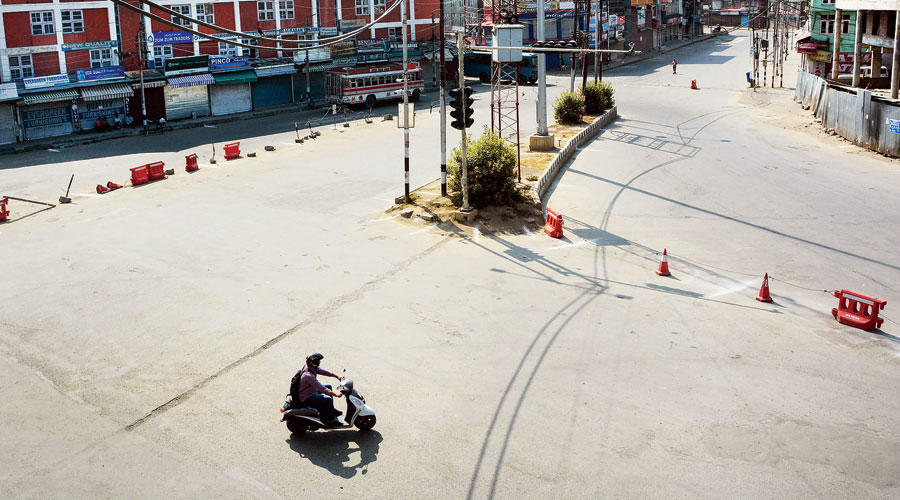 The raids coincided with a break by separatists from their long slumber since Jammu and Kashmir lost its special status and statehood last year
File picture
Muzaffar Raina   |   Srinagar   |   Published 29.10.20, 01:59 AM

The National Investigation Agency (NIA) has raided a cross-section of the civil society in Kashmir, including human rights defenders and journalists, on a day resistance seemed to be crystallising against the new land purchase policy notified by the Centre.

Officials of the NIA, which reports to the Union home ministry, said searches were carried out on 10 premises in Srinagar and Bandipora in the Kashmir Valley and on one locality in Bangalore in connection with a case involving NGOs and trusts raising funds at home and abroad.

The officials claimed that funds were raised in the name of charitable activities and subsequently used for carrying out secessionist and separatist activities in Jammu and Kashmir.

An NIA spokesperson said raids were conducted “on the residence and office of Khurram Parvez, co-ordinator of J&K Coalition of Civil Society (CCS); his associates Parvez Ahmad Bukhari, Parvez Ahmad Matta and Swati Sheshadri; Parveena Ahanger, the chairperson of Association of Parents of Disappeared Persons (APDPK), and NGO Athrout and GK Trust, among others.”

GK Trust publishes two most widely read newspapers, the Greater Kashmir and the Kashmir Uzma. The CCS and the APDPK are human rights organiations.

Bukhari is a journalist who has contributed for the Time magazine and Al Jazeera among others and now works for the France-based news agency AFP. Sources said there was also a raid on the residence of a senior journalist.

Athrout, a charity, has been at the forefront of assisting the needy during crises in the Valley for more than a decade.

Khurram and many others had expressed outrage on Tuesday against the new land law that lifts the bar on those living outside Jammu and Kashmir from buying non-agriculture land in the Union Territory. The change, facilitated by the abrogation of the special status, was notified by the Centre on Tuesday.

“Abrogation of (the special provision in) Article 370, India had claimed that it was being done to ensure development, creation of jobs, women empowerment and transparency. Kashmiris knew that the real reason for abrogation was land grabbing and demographic changes. It can’t be anymore brazen and violent,” Khurram had tweeted on Tuesday.

Disquiet against the new land rule is brewing in Jammu’s Hindu heartland, too, with several Dogra leaders claiming that the Dogra  identity was under assault. Jammu’s Hindu hub is a BJP stronghold where the Dogras, who are Hindus, form the  majority.

The raids coincided with a break by separatists from their long slumber since Jammu and Kashmir lost its special status and statehood last year. The separatists called for a shutdown on October 31 against the new “imperial” land laws.

On the searches, an NIA spokesperson said:  “A case was registered under sections 120B (criminal conspiracy) and 124A (sedition) of the Indian Penal Code (IPC) and relevant sections of the Unlawful Activities (Prevention) Act (UAPA), 1967 on receipt of credible information that certain NGOs and Trusts are collecting funds at home and abroad through donations and business contributions, and are utilising these funds for secessionist and terrorist activities in J&K.”

Politicians, journalists and people from other walks of life called the raids a crackdown on dissent and an assault on people who refuse to fall in line.

“The NIA raids on GK office and HR defender Khurram Parvez’s house are attempts to impose silence even on our whispers (and they’re scared of even that). This comes a day after the disempowering land laws. Can this be just a coincidence?” tweeted Anuradha Bhasin, editor of the Kashmir Times. Bhasin’s office and residence- — allotted by government — in Srinagar and Jammu were recently sealed.

Former chief minister Mehbooba Mufti said the raids was yet another “example of GOI’s vicious crackdown on freedom of expression and dissent”.

“Sadly, the NIA has become BJPs pet agency to intimidate & browbeat those who refuse to fall in line,” she tweeted.

“At a time when J&K’s land & resources are being plundered, GOI wants media publications to write op-eds about diabetes & yoga. In BJP’s ‘all is well’ charade, truth is the biggest casualty. Any journalist unwilling to become a part of Godi media is targeted.”

Sajjad Lone, People’s Alliance for Gupkar Declaration, a seven-party alliance to fight for the restoration of the special status, said NIA raids have added to the “environment of fear”.

“GK essentially was one institution which struggled its way to the top. The institution now stared helplessly as fear and slander take over. Hoping against hope that sanity prevails,” he said.

Land ache in Hindu belt too