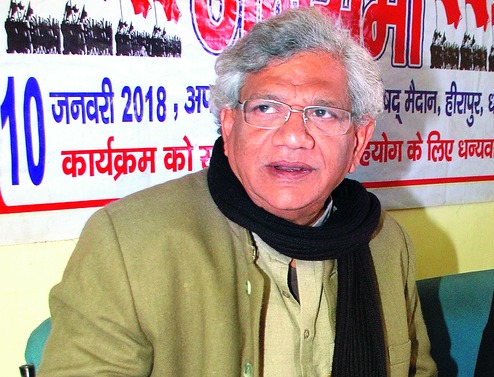 The CPM has decided to join the Rafale bandwagon — till now largely pursued by the Congress — even as the central committee meeting over the weekend on electoral tactics saw the hardliners keep alive their isolationist line of having no truck with the Grand Old Party.

Not only did the central committee decide to highlight the Rafale deal as part of its campaign to expose the “corruption and crony capitalism” of the Narendra Modi government, the CPM has also come out with a 14-page booklet detailing the alleged omissions and commissions by the BJP regime in “Modi’s Rafalegate”.

While the Congress has been training its guns on the Modi government over the Rafale deal for months now, it did not find many takers till recently.

After former French President Francois Hollande was quoted as saying that Anil Ambani’s Reliance group was picked to be Rafale-maker Dassault’s offset partner following a prod by the Modi government, other Opposition parties have taken a more serious note of what the Congress has been saying all along.

Asked about the money trail in the Rafale scam, CPM general secretary Sitaram Yechury pointed out that electoral bonds, an idea conceived and executed by the Modi government, were providing the perfect cover, shrouded as the whole process was in secrecy with only the government being privy to who had bought the bonds and where the money was going.

As for the tactics for the upcoming Assembly and Lok Sabha elections, Yechury said defeating the BJP and its allies had been identified as the main task.

While the CPM would try to increase its strength and that of the Left Front in the Lok Sabha, the party would also work to ensure an alternative secular government is formed at the Centre.

However, Yechury did not get drawn into speculating whether the CPM would back a UPA I-like arrangement when the Left had offered outside support to the Congress-led coalition.

“There is also the 1996 model,” he said, flagging the instance when the Congress, even after emerging the single-largest Opposition party, opted to support two non-BJP coalitions back-to-back.

As for the year-end Assembly elections in Rajasthan, Madhya Pradesh and Chhattisgarh, the CPM has decided to contest a few seats and give a call to defeat the BJP in the others.

While it is a direct fight between the BJP and the Congress in Madhya Pradesh and Rajasthan, the Chhattisgarh unit of the CPM has told the central leadership that the alliance forged by the BSP with former chief minister Ajit Jogi’s party is aimed at helping the BJP.

In Telangana, the CPM has decided to be part of the Bahujan Left Front that has been formed in keeping with the joint struggles with Dalit and backward-class organisations.

As for a wider Opposition unity before the 2019 Lok Sabha polls, Yechury iterated that this was never the plan in the national context as it was not feasible.

“Various parties have different roles in different states. They are all in talks and once things crystallise in the states we will take a concrete decision,” he said, echoing his long-held position that only a post-poll coalition was possible depending on the results.