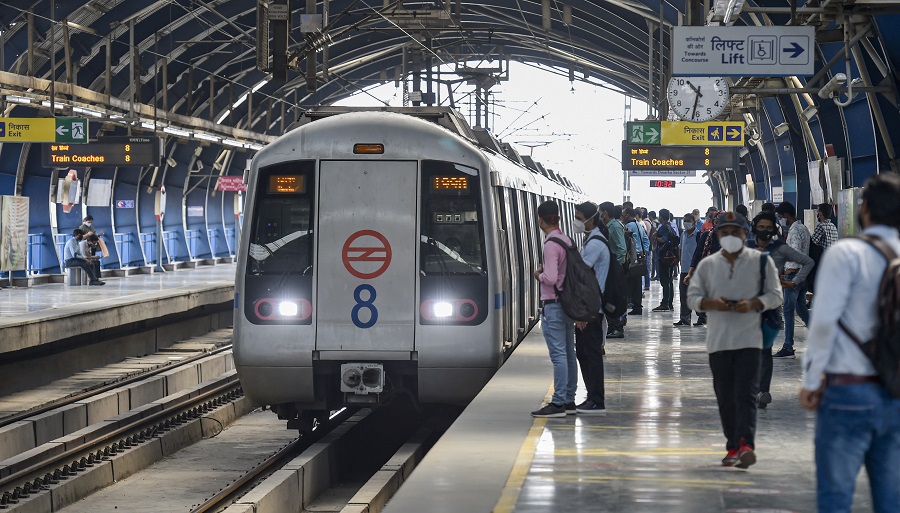 Commuters wait to board a train at the Lakshmi Nagar Metro Station after resumption of the Delhi Metro services in a graded manner, in New Delhi on Monday.
PTI
Our Bureau, Agencies   |   Calcutta   |   Published 07.06.21, 01:03 PM

As India witness the fall of second Covid-19 wave with fresh cases decreasing in a consistent manner, a host of states began the unlocking process from Monday. Delhi, Mumbai, Maharashtra, Uttar Pradesh, Haryana and Leh have started easing up the Covid induced restrictions.

The announcements were made in the last couple of days as the active infection cases dipped further in the past week. However, these states will still be under partial lockdown and only some relaxations have been made keeping the economy in mind. Delhi will next review the Covid situation on June 14 while Maharashtra on June 15. The Uttar Pradesh government has lifted curfew in all districts except for three — Meerut, Saharanpur and Gorakhpur. With this, curfew has been lifted in 72 of 75 districts of UP.

Delhi chief minister Arvind Kejriwal on Saturday extended the ongoing lockdown but announced some more relaxations. From Monday, he said, markets and malls would be allowed to open on an odd-even basis from 10 AM to 8 PM. The Delhi Metro will operate at 50 per cent capacity, government and private offices will be allowed to reopen with 50 per cent staff. Delhi began its 'unlock' process on May 31, when it allowed only construction and factory activities.

Maharashtra is under lockdown till June 15. However, it will begin a five-level unlock process from Monday. According to a government notification, cities and districts which have a positivity rate of less than five per cent and the oxygen bed occupancy of less than 25 per cent will open up completely. But in places where the positivity rate is more than five per cent and oxygen bed occupancy is over 25 per cent, restrictions with varying degrees will remain effective.

The Brihanmumbai Municipal Corporation (BMC) on Saturday released detailed guidelines for the next week beginning June 7. The civic body said that the city had fallen under level-3 of the unlock plan of Maharashtra. It said restaurants, shops selling non- essential items and public places will reopen from Monday but malls, theatres and multiplexes will continue to remain shut. Local trains, considered the lifeline of the maximum city, will remain available only for specific categories.

Development activities and construction work where labourers reside on the work site have also been allowed. For restaurants, only home delivery service would be allowed on weekdays, while the hotels would be allowed to operate dine-in services with a 30 per cent seating capacity for in-house guests. Non-essential vehicular movement would be allowed on odd/even systems with 50 per cent seating capacity. Besides, Kargil DDMA chairman Santosh Sukhadeve issued an order extending the curfew in the district till 7 am on June 14.

Uttar Pradesh has lifted Covid restrictions in all districts except in Meerut, Saharanpur and Gorakhpur. Active cases of the coronavirus are above 600 in Meerut, Saharanpur and Gorakhpur. On Saturday, the state government extended relaxations in the curfew to Bareilly and Bulandshahr districts from June 7, allowing shops and markets outside the containment zones to open for five days a week. However, the night curfew and weekend curfew will continue to remain.

Haryana has extended the lockdown by another week till June 14, while easing several restrictions that were in place earlier. Further relaxations regarding opening of shops and shopping malls have been given. Religious places have also been allowed to open with 21 people at a time, corporate offices have also been permitted to open with 50 per cent staff and gatherings of up to 21 people have been allowed at weddings, funerals and cremations.

For gatherings other than weddings, funerals and cremations, the maximum number of people allowed is 50. For gatherings of more than 50 people, prior permission from the deputy commissioner concerned shall be required. Club houses, restaurants and bars at golf courses are allowed to open with 50 per cent seating capacity from 10 am to 8 pm.