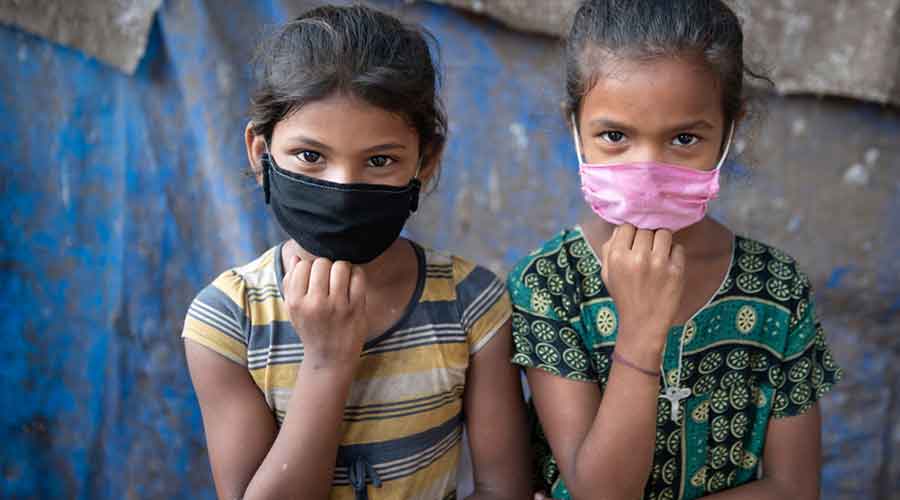 The study has found 56 per cent of children between two and 17 years and 64 per cent of adults sampled from 2,000 randomly selected urban and rural households in Agartala, Bhubaneswar, Delhi and Gorakhpur showing antibodies against the coronavirus.
Shutterstock
G.S. Mudur   |   New Delhi   |   Published 18.06.21, 02:05 AM

A four-city study during the second Covid-19 wave in India has detected nearly similar widespread infections in children and in adults and suggested that any future surges caused by the current coronavirus variants are unlikely to disproportionately impact children.

The study has found 56 per cent of children between two and 17 years and 64 per cent of adults sampled from 2,000 randomly selected urban and rural households in Agartala, Bhubaneswar, Delhi and Gorakhpur showing antibodies against the coronavirus.

The findings from antibody surveys between April and June have also indicated that seropositivity levels — a sign of previous infection — have increased over six-fold to 60 per cent in children between 10 and 17 years, compared with nine per cent during August-September last year.

Doctors at the All India Institute of Medical Sciences, New Delhi, who led the study, said the “high and comparable” infection rates in children and adults make it “unlikely that any third wave by the prevailing variants would disproportionately affect children”.

The findings come at a time health officials and medical experts have been trying to douse speculative notions among sections of the public that a possible third Covid-19 wave might hit children harder as adult infections dominated the first and second waves.

The comparable and high infection prevalence rates in children and adults are not surprising given independent studies indicated that the second wave was driven by a variant much more transmissible than variants during the first wave, experts said.

The seropositivity levels detected in the four-city survey, one expert said, suggest that the population may be approaching the herd immunity threshold, a point at which the virus has already infected so many people that it finds it hard to continue to spread fast in those populations.

“If we also see similar seropositivity levels across the country, a third wave is extremely unlikely with the current variants,” said T. Jacob John, a former professor of clinical virology at the Christian Medical College, Vellore. “We’ll know how close we are to that threshold after a fresh nationwide survey.”

The Indian Council of Medical Research is conducting an antibody survey at the same 70 sites across the country where it had measured seropositivity levels earlier in April-May 2020, September-August 2020 and January 2020.

The findings of the third sero-survey released in January 2020 had indicated that 21.6 per cent of the population had antibodies against the virus. Health researchers involved in the current survey expect to find the proportion of population infected much higher now.

“Anecdotal accounts suggest that the within-household spread of the coronavirus during the second wave was very high, in some cases near 100 per cent, much higher than during the first wave,” John said. “This would explain the comparable and high prevalence rates we see among children.”

Paediatricians have said they have observed no differences in patterns of Covid-19 infections among children between the first and second waves. The vast majority of children have shown no symptoms and only a small proportion of them required hospital care.