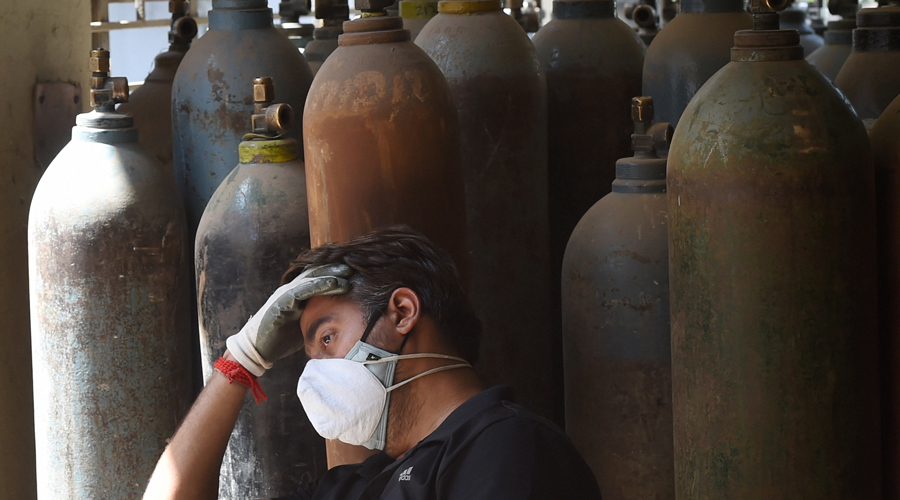 On the oxygen crisis, the high court said: “(The) death of Covid patients just for non-supplying of oxygen to the hospitals is a criminal act and not less than a genocide by those who have been entrusted the task to ensure continuous procurement and supply chain of the liquid medical oxygen.”
PTI
Piyush Srivastava   |   Lucknow   |   Published 06.05.21, 01:12 AM

Allahabad High Court has exposed the Uttar Pradesh administration’s claims about the reliability of its Covid information system by demonstrating a mismatch between the government helpline and portal on the availability of hospital beds.

It has also described as “a criminal act and not less than a genocide” the state authorities’ failure to supply adequate oxygen to hospitals, shredding chief minister Yogi Adityanath’s steadfast denial of any oxygen crisis.

During a virtual hearing on Tuesday, the bench of Justices Siddhartha Varma and Ajit Kumar asked an advocate, Anuj Singh, to call up the Covid helpline number around noon.

“Anuj Singh dialled the number again and again and the line was showing busy. However, ultimately he (was) able to connect and (the) reply was that there was no Level-2 (or) Level-3 bed available, whereas the online portal, during the course of hearing of the case, was showing that there were vacant positions of beds in both Level-2 and Level-3 category,” the high court observed, according to records of the proceedings.

Mismatches between government portals’ claims about bed availability and the situation on the ground are prevalent across the country — from Delhi to Chennai — given the high demand for beds and the logistics of updating the portals.

The Uttar Pradesh government says it updates the portal twice a day — early in the morning and late in the afternoon. However, some states claim to update their portals after four, six or eight hours.

“Similarly, Anuj Singh, learned advocate (mentioned an instance involving) King George’s Medical University Hospital (Lucknow) where portal showed 3 ICU beds to be vacant (on Sunday) and when (the) hospital was contacted (the same day), it informed that there were no vacant ICU beds,” the high court said.

A senior official at King George’s said most of the hospital’s computer operators were Covid-infected and on leave, slowing the updating process.

On the oxygen crisis, the high court said: “(The) death of Covid patients just for non-supplying of oxygen to the hospitals is a criminal act and not less than a genocide by those who have been entrusted the task to ensure continuous procurement and supply chain of the liquid medical oxygen.”

Adityanath denies any oxygen shortage and has ordered a crackdown on black marketeers and hospitals that “spread rumours and panic”, the directive triggering arrests and threats to patients’ relatives, Covid volunteers and hospitals.

The bench also sought a clarification on allegations that a sitting high court judge, Justice V.K. Srivastava, who had died last week in Lucknow, had not received proper treatment.

It said Justice Srivastava was admitted to the Ram Manohar Lohia Hospital, Lucknow, on the morning of April 23 and “it was only around 7.30pm when his condition deteriorated (that) he was placed on ventilator”.

The “same night he was shifted to Sanjay Gandhi Postgraduate Institute of Medical Sciences, Lucknow, where he was in ICU for five days” before dying, it said.

The bench asked additional advocate-general Manish Goyal to file an affidavit on the treatment given to Justice Srivastava at the Ram Manohar Lohia Hospital and explain why he had not been taken to the Sanjay Gandhi Institute straightaway.

The high court was hearing a PIL registered on its own direction last year about the poor conditions at quarantine centres and inadequate Covid treatment in the state. Singh is one of the lawyers the high court has appointed to argue the case.