Advertisement
Home / India / Covering areas like vaccines makes Quad a force for global good: Modi at Quad meet
‘We are united by our democratic values’ 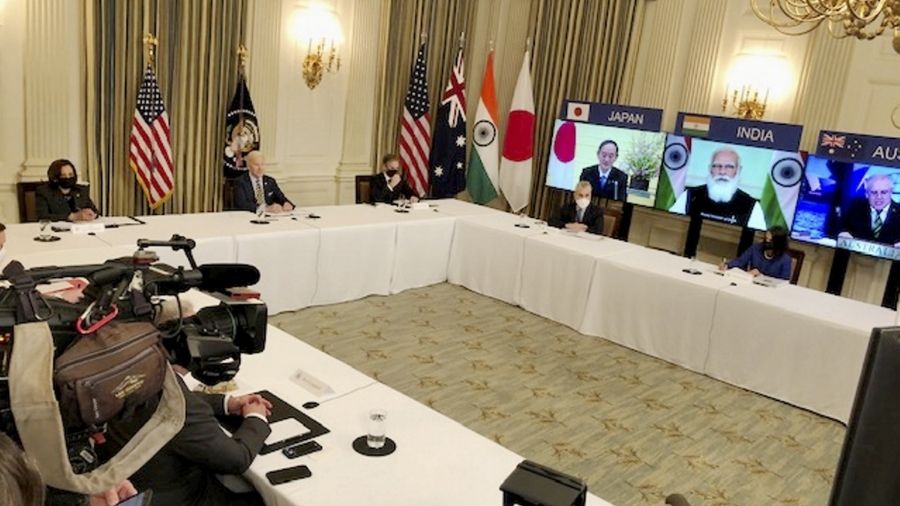 The Quad has come of age and its agenda covering areas like vaccines, climate change and emerging technologies makes it a force for global good, Prime Minister Narendra Modi said at the first summit of the coalition.

In his opening remarks, he also talked about shared values and promoting a secure, stable and prosperous Indo-Pacific.

"We are united by our democratic values, and our commitment to a free, open and inclusive Indo-Pacific. Our agenda today covering areas like vaccines, climate change and emerging technologies makes the Quad a force for global good," he said.

"I see this positive vision as an extension of India's ancient philosophy of Vasudhaiva Kutumbakam, which regards the world as one family," Modi said.

"We will work together, closer than ever before, to advance our shared values and promote a secure, stable and prosperous Indo-Pacific," he said.

The prime minister said the holding of the summit shows that the Quad has come of age and it will now remain an important pillar of stability in the region.

In his remarks, Biden said there was a need to focus on generating domestic demand and driving sustainable global growth.

He also talked about having an ambitious new joint partnership that is going to boost vaccine manufacturing and strengthen vaccinations to benefit the entire Indo-Pacific region.

"We are establishing a new mechanism to enhance our cooperation and raise our mutual ambition as we address accelerating climate change," he said.

The US president also mentioned the commitment to ensure that the region is governed by international law and it is free from coercion.

"I am optimistic about our prospects," he said.

The most significant among the deliverables envisaged in the summit is a coronavirus vaccine initiative that will allow new manufacturing capacity to be added in India for exports to the Indo-Pacific region, sources said.

Known as the "Quadrilateral Security Dialogue, representatives for the four member nations have met periodically since its establishment in 2007.

The Quad member states have been resolving to uphold a rules-based international order in the Indo-Pacific amid growing Chinese assertiveness in the region.

The foreign ministers of the Quad countries held a virtual meeting on February 18 during which they vowed to uphold a rules-based international order underpinned by respect for territorial integrity and sovereignty, freedom of navigation and peaceful resolution of disputes.

The evolving situation in the Indo-Pacific region in the wake of China's increasing military muscle-flexing has become a major talking point among leading global powers. The US has been favouring making Quad a security architecture to check China's growing assertiveness.

The foreign ministers of the Quad member nations met in Tokyo on October 6 last year and reaffirmed their collective vision for a free, open and inclusive Indo-Pacific.

The Quad foreign ministers held their first meeting under the Quadrilateral or Quad framework in New York in September 2019.