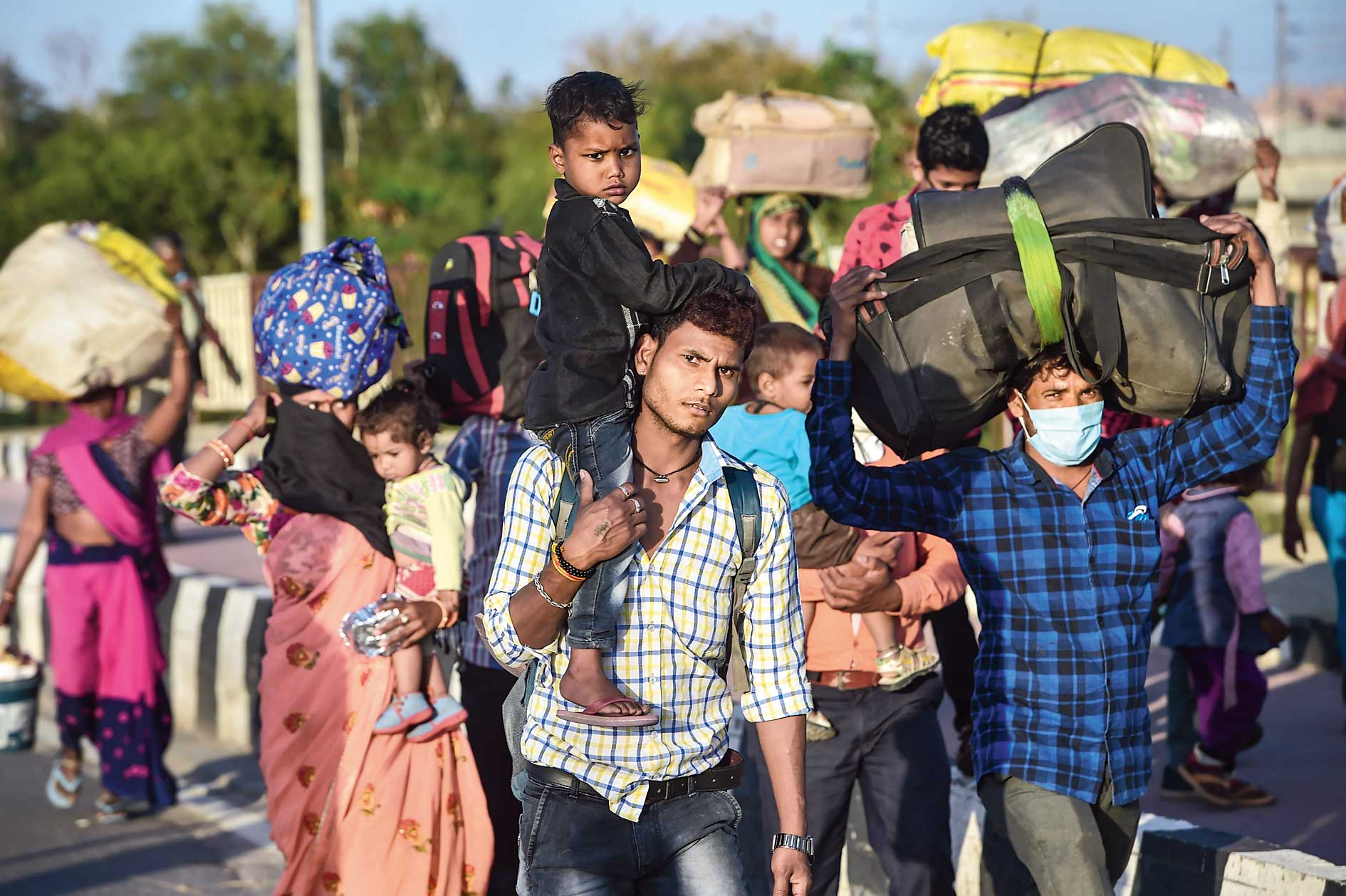 Migrant workers along with their family members walk to their native village during the lockdown in New Delhi on Sunday.
(PTI)
Anita Joshua   |   New Delhi   |   Published 29.03.20, 09:23 PM

The Centre on Sunday asked the states to seal borders to halt the movement of people and issued directives aimed at assuaging concerns that have compelled a growing tide of migrants to break the lockdown and leave big cities in an exodus unparalleled in recent memory.

Prime Minister Narendra Modi also apologised for imposing hardships on the people in his monthly radio address that shunned any actionable promises but became an event in which some stakeholders praised the efforts to fight the coronavirus.

The Centre has woken up to the crisis a week after the “Janata Curfew”, which could have been used to create awareness about the impending lockdown and reassure migrants and other vulnerable sections but was converted into a plate-clanging and hand-clapping spectacle that threw caution to the winds.

Media reports from the states suggest that 19 migrant workers have died in road accidents in the past couple of days during their arduous journeys back home, often on foot.

In an exercise resembling the ad hoc nature of the decisions witnessed during the demonetisation of 2016, the Union home ministry issued a series of directives to the states and Union Territories after two rounds of videoconferences with the chief secretaries and directors-general of police.

Clearly, the Centre has made state governments and district administrations responsible for tackling the humanitarian crisis resulting from mass migration. But there is no clarity on whether funds and facilities — especially for sanitised quarantines, medical supervision, and food and sanitation — exist in the districts suddenly inundated by the migrant influx.

• The Centre asked states to seal the state and district borders to ensure there is no movement of people across cities or along highways.

• It asked the states to ensure that those who have “violated the lockdown” and travelled during this period are “subject to (a) minimum of 14 days of quarantine in government quarantine facilities”.

• The responsibility of enforcing the order lies on the district magistrates and superintendents of police. “DMs and SPs should be made personally responsible for implementation of these directions which have been issued under the DM (Disaster Management) Act,” the Centre’s directive to the states said.

• The states and Union Territories have been advised to arrange food and shelter for the poor and vulnerable, including migrant workers at the places where they work. For this, the Centre has directed the use of funds from the State Disaster Response Funds. Later in the day, the Bengal chief secretary issued necessary orders to all district magistrates.

• Only movement of goods should be allowed.

• The states and Union Territories have been told to ensure timely wage payment to labourers at their place of work, without any cuts, during the lockdown. Nor should house rent be demanded from them during this period. “Action should be taken against those who are asking labourers or students to vacate the premises,” the directive said.

The directive from the top will take time to implement and its benefits will take longer to trickle down to the panicky migrants who are already on the road.

Had the Prime Minister, who has addressed the nation twice in less than a fortnight and who commands the attention of most of the nation, made these assurances, it would have had some calming effect on the migrants.

The financial package the Centre announced recently too has failed to live up to expectations. Congress leader and former finance minister P. Chidambaram said on Sunday: “We need a financial rescue package that will transfer an additional Rs 5 lakh crore to the people and put the money in their pockets. Otherwise, apart from a Covid tragedy, there will be a livelihood calamity for the poor and vulnerable.”

While the Centre on Sunday asked the states to provide food and shelter to the migrants, several states such as Delhi, Kerala, Punjab, Rajasthan and Maharashtra have already been doing so. They set up makeshift shelters for the migrants over the past couple of days.

Most of the migrant workers are, however, keen to return home as they see no hope of sustenance in their places of work in the foreseeable future.

Late on Sunday night, the Centre suspended two senior Delhi government officials and showcaused two others for their alleged failure to ensure public health and safety during the lockdown.

The four officials, including two additional chief secretaries, report to the Delhi government, which ran buses to the state border to help the migrants avail themselves of the transport facilities arranged by the Yogi Adityanath government in Uttar Pradesh.

The Centre has used powers under the Disaster Management Act to move against the officials.