Covid crisis: Sobs rise over the roar of mass pyres

The crematoriums in Delhi, struggling to cope with the deluge of the dead, are witness to an unimaginable tragedy 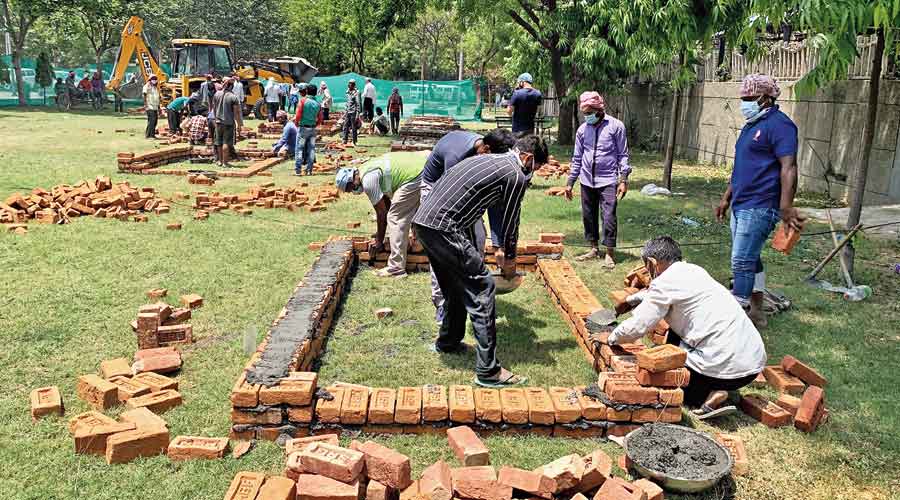 Under the high tin roof, 50 funeral pyres burned fiercely on Tuesday and the hot air filled with smoke, fine ash and muted sobs.

On the floor nearby and in scores of parked vehicles lay more bodies, awaiting their turn, which family members were told would come 16 to 20 hours later.

The crematoriums in Delhi, struggling to cope with the deluge of the dead, are witness to an unimaginable tragedy.

“I have not seen such a bad situation ever before in my life. People are going with the bodies of their loved ones from pillar to post,” Vineeta Massey, the owner of Massey Funerals, said.

As if the trauma of losing a loved one suddenly was not enough, families are not even able to give them a proper send-off. They are driving from crematorium to crematorium with the bodies — in hearses or personal cars — desperately seeking space to bid a final goodbye to a beloved parent, child, sibling or grandparent.

Among the dead are also people who died of reasons other than Covid but have been swept up in the collective national tragedy.

“We rushed him to many private hospitals when he started feeling discomfort in his chest but he was not even checked by the medical staff there. They demanded that we produce a Covid-negative report. He eventually passed away,” Aman said.

On Monday afternoon, Aman was told by the staff at the Subhash Nagar crematorium to wait till Tuesday morning to perform the last rites. When Aman realised there was no point in pleading, he arranged for a refrigerator to prevent his father’s body from decaying.

“What could I have done when there was no space? We kept the body in a rented fridge and have come early today (Tuesday),” said Aman, waiting for his turn as many other people milled around silently as bodies lay on the floor.

Outside, ambulances and cars honked and competed for parking space, but inside all one could hear was the crackling of dry wood from the burning pyres — all 50 of them roaring simultaneously. A few sobs rose over the sound of the fires.

Some of the additional chambers set up at the park
PTI

The unemotional intonations of instructions by crematorium staff could also be heard, such as this one: “Apna dead body uthao aur udhar line mein ja ke khade ho jao (Pick up your dead body and go stand in line).”

A woman in her 40s was so stunned she could not make out what was “nabhi” (navel) or “chhati” (chest) when a staff member asked her to place sandalwood sticks on the body of her father who had died of Covid. The body was still packed in a white sack, which had been placed on the pyre without opening.

Holding the sandalwood sticks in trembling hands, she circled the body before being helped by someone.

“I didn’t even see the face of my father,” wailed the woman, who was alone.

Manmeet Singh, a 40-year-old assistant professor, had also brought his father Gurpal Singh’s body in his car to the Subhash Nagar crematorium on Monday afternoon.

The staff politely told him his father could not be cremated because the pyre chambers were full and the CNG crematorium could only accommodate two bodies at one time. It takes about 90 minutes to dispose of one body in a CNG chamber and there were 24 bodies waiting in a queue for a slot.

Manmeet left for the MCD crematorium in Pashchim Vihar about 6km away and found space with the help of an MCD inspector.

“If you can’t provide oxygen to the patients in hospitals, then at least provide some space in the cremation ground so that people leave the world comfortably,” Manmeet said.

The ground at the crematorium was full of filth and covered with leftovers of the previous cremation. It was muddy, rotten fruits, plastic bags, sacks, buckets and mugs littered the ground. But none of that mattered to the relatives. What mattered was getting enough space to light a pyre.

According to rules, a senior official at the Delhi health department said, if someone dies of Covid-19 in hospital, the district administration has to arrange a hearse van and the hospital is supposed to deploy staff for the cremation or burial. But the crush of dead has made this impossible. So relatives are simply taking their loved ones in their personal vehicles.

“If family members have to move with the bodies, there are chances of them getting infected,” another government official said.

Ajeet, a staff member at the MCD crematorium, said they have created more than 100 extra makeshift chambers in an adjacent space. “I can’t move my arms, I am dead tired. The whole day we arrange for cremation and then in the night we have to take care of the pyres, so that the fire consumes the bodies properly,” Ajeet said.

Editorial: By the people