We had time to prepare. We should have taken this threat much more seriously and have been much better prepared: Rahul Gandhi tweeted 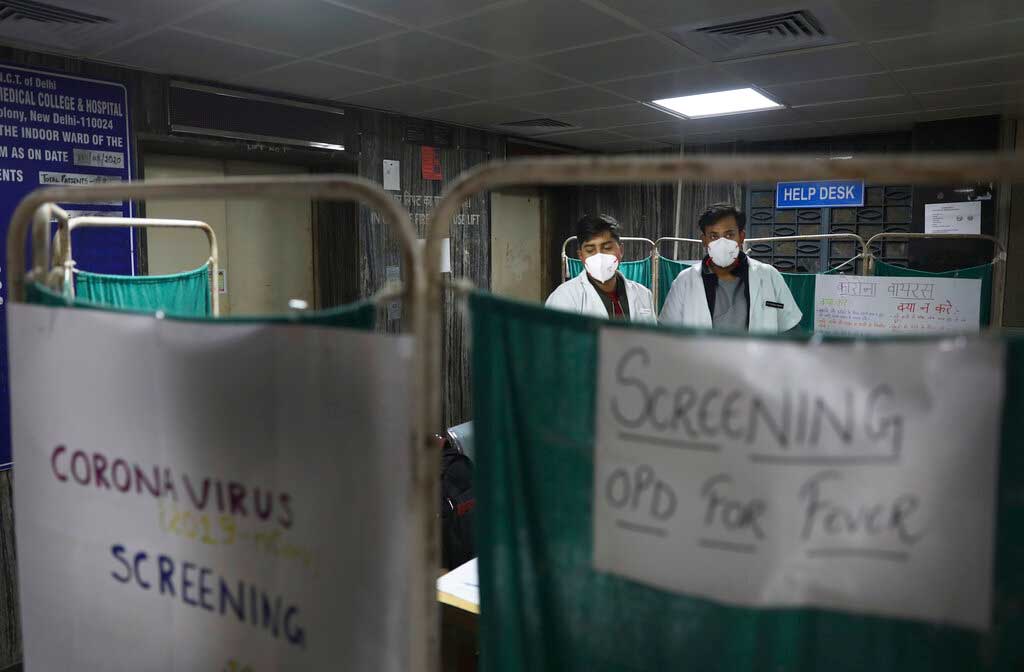 Doctors screen a patient in an isolated area set aside for suspected coronavirus patients at a government hospital in New Delhi.
(AP)
Our Special Correspondent   |   New Delhi   |   Published 24.03.20, 10:02 PM

A Twitter user who identified herself as a doctor in a government hospital complained on Tuesday of the lack of personal protection equipment for health care staff battling the coronavirus outbreak and tweeted: “When they arrive, please send N95 masks and gloves to my grave. Taali aur thaali b baja dena waha! Regards, frustrated sarkari doctor.”

The call to clap and bang utensils at her grave was a reference to Prime Minister Narendra Modi’s call to Indians to do this, besides ringing bells, to show gratitude to health care workers last Sunday.

Congress leader Rahul Gandhi, who has since February 12 repeatedly called for aggressive government action to fight the coronavirus, tagged the tweet and wrote: “I am feeling sad, because this was completely avoidable. We had time to prepare. We should have taken this threat much more seriously and have been much better prepared.”

While this tweet and the Twitter account appeared to have been deleted on Tuesday evening and was showing as “unavailable”, several doctors — including those from AIIMS — have spoken of lack of personal protection equipment.

On Monday, Rahul had tweeted in Hindi: “Respected Prime Minister, despite the WHO’s advice to keep and adequate supply of ventilators and surgical masks, why did the government of India allow the export of these things till March 19?” He asked if this was not a “criminal conspiracy”.

The Congress on Tuesday said the failure to ensure personal protection equipment (PPEs) for doctors and health workers despite early warnings of the coronavirus threat reflected a “criminal attitude” and asked Prime Minister Narendra Modi to sack the ministers concerned.

Party’s communication chief Randeep Surjewala said in a video message in the afternoon: “Prime Minister, when you address the nation again today, doctors don’t want thali-tali mention, they want protection. Do you even know India needs 7.25 lakh Hazmat suits or overalls, 60 lakh N95 masks, one crore three-ply masks, among other things? And these are not available because the health ministry and textile ministry did not decide specifications for manufacture between February 1 and March 2. This is gross criminality.”

Surjewala continued: “Whatever equipment we had, the commerce ministry allowed export of those items. When you address the nation tonight, announce sacking of your favourite ministers — textile minister Smriti Irani and commerce minister Piyush Goyal.”

The Congress, which has been repeatedly pleading with the government to announce a financial package for day labourers and small businesses, iterated its demand on Tuesday. Congress president Sonia Gandhi wrote to the Prime Minister, seeking compensation for the large-scale disruption of economic activities and livelihood options for the poor. She also wrote to Congress chief ministers to do everything for the poor, in addition to arranging for their food during this period.

Sonia said in her letter to Modi: “We are in the midst of the worst global pandemic which necessitated stringent measures for containment and management of Covid-19 transmission. These measures have led to widespread economic disruption that had a debilitating impact on the informal sector. Over the last week, lakhs of migrant workers in major cities across India have left for their hometowns and villages fearing a prolonged economic downturn.”

She continued: “As the second largest employer in India, over 44 million construction workers are now faced with a precarious future. Many are stranded in cities and are deprived of their livelihoods due to stringent lockdown. The Building and Other Construction Workers (Regulation of employment and Conditions of Services) Act 1996 provides for various welfare measures of workers. The act also provides for constitution of state welfare boards and welfare fund. It is reported that welfare boards collected cess amounting to Rs 49,688 crore till March 2019. However, only an amount of Rs 19,379 crore had been spent.”

Sonia said: “Several countries around the world, notably Canada, has announced wage subsidy measures as part of its Covid-19 economic response. Considering extraordinary circumstances, I request you to consider advising state welfare boards to roll out emergency welfare measures, including wage support to workers who are in distress.”

Rahul Gandhi wrote to people of his constituency Wayanad, stressing the importance of social distancing while maintaining unity in this hour of crisis. He pointed out how South Korea, Taiwan and Singapore contained the damage by timely intervention.

Priyanka Gandhi also wrote to Congress workers, asking them to spread awareness and help patients in their localities.