Workers yet to receive a month's payment from Centre and state at a time, no work is available owing to the pandemic 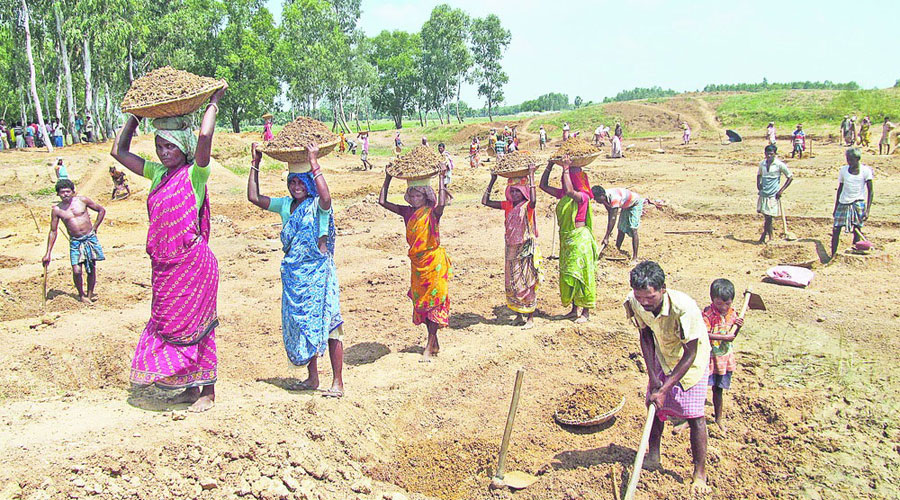 According to the Mahatma Gandhi National Rural Employment Guarantee Act, the workers have to be paid within 15 days of the end of a particular phase of work.
File picture
Basant Kumar Mohanty   |   New Delhi   |   Published 18.05.21, 01:00 AM

Koushalya Hembram, 42, of Jharkhand’s West Singhbhum district worked under the rural job scheme for 21 days in April. But the unmarried resident of Podahat village had not received her wages till Monday.

No other work is available in her area amid a resurgent Covid.

“I keep checking my mobile phone in vain for a message saying my wages have been credited to my account,” Koushalya said.

“It shouldn’t take this long. We are not receiving our NREGA wages on time, and there’s no other work available. What shall we do?”

Koushalya had worked with nine others on a pond renovation project in Bhalumara village in three phases from April 2 to 8, 10 to 16 and 21 to 27.

None of the 10 has received their wages, which should be more than Rs 4,500, with the Centre providing Rs 200 a day and the state government adding another Rs 25 a day that it has promised to introduce from this financial year.

According to the Mahatma Gandhi National Rural Employment Guarantee Act, the workers have to be paid within 15 days of the end of a particular phase of work.

Koushalya should therefore have received her first wage payment by April 23, the second by May 1 and the third by May 12.

Sandeep Kumar, coordinator, Sahayata Kendra, a non-governmental organisation that educates villagers in the district about government welfare programmes and helps them secure their rights, blamed the Centre.

He said the state government had completed the formality of sending the funds transfer order to the Union rural development ministry for release of the NREGA workers’ wages.

“The payment is pending with the central government. Every day, the workers are coming to us to enquire,” Kumar said.

Siraj Dutta, a social activist associated with the NREGA Sangharsh Morcha, a civil society organisation, said nearly 12 lakh job scheme labourers from Jharkhand were yet to receive their wages for work done in April.

He said the workers were unable to gather and protest because of the surge in Covid cases.

“The NREGA is a fallback option for rural workers (because of the low wages) — they come to it when there’s no other avenue,” Dutta said.

“If their wages are not paid on time, it amounts to discouraging rural people from working under this national job scheme.”

Delay in the payment of wages has been one of the main problems with the scheme from its inception in 2006.

Data provided in the Lok Sabha in March by junior rural development minister Sadhvi Niranjan Jyoti suggest that on March 18, the workers’ wage arrears under the scheme stood at Rs 1,746 crore.

Dutta criticised the Centre also for keeping the NREGA wages below the state minimum wages in more than half the states.

For most of the states, the Centre has this year raised the job scheme wages by a paltry three to four per cent over the previous financial year’s. There’s been no increase in Kerala and just a Re 1 increase in Rajasthan.

An email sent to the rural development ministry on Saturday seeking an explanation for the delayed wage payments had remained unanswered till Monday night.