According to data accessed from the state rural development department, the labourers have pending wages to the tune of Rs 10.48 crore 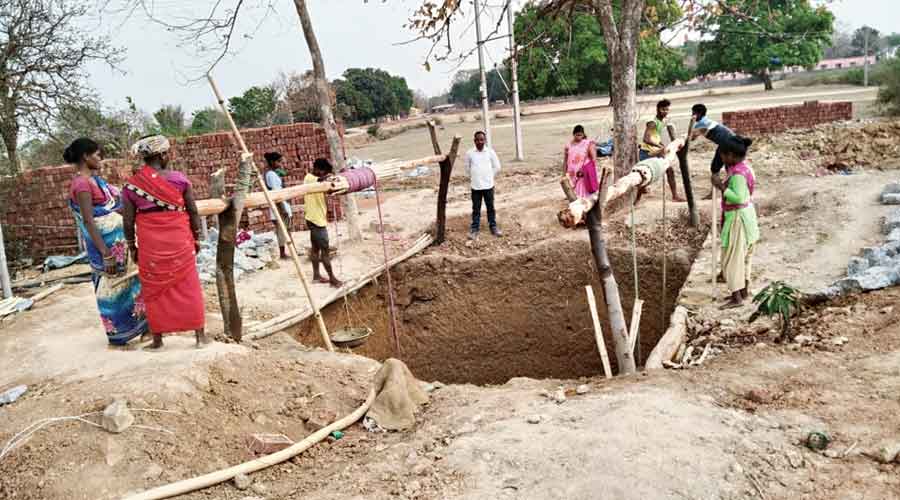 Wages of over 10 lakh workers in Jharkhand under the Mahatma Gandhi National Rural Employment Guarantee Act have not been paid for over a month, according to data on the scheme’s website.

The MGNREGA dashboard has been developed by the National Informatics Centre (NIC) and maintained by the Union ministry of rural development.

“Wages of Jharkhand’s NREGA workers are pending since 45 days as the central government has not released funds. At a time when workers should get additional income to support their families during the pandemic-induced lockdown, the government has failed to deliver even their hard earned wages. It is another failure of the Narendra Modi government amid the pandemic and shows it is insensitive to the plight of rural workers. We will be writing to the Prime Minister’s Office on Saturday about the deplorable condition of workers due to non-payment of wages,” said James Herenz, convener of NREGA Watch, a civil society outfit monitoring lapses in MGNREGA projects across Jharkhand.

The Jharkhand Janadhikar Mahasabha, which claims to be a coalition of progressive organisations, formed to facilitate efforts to defend people’s rights and save democracy in the state, has tweeted about the non-payment of wages to MGNREGA workers and tagged chief minister Hemant Soren and Union rural development secretary N.N. Sinha. An IAS officer, Sinha has served in Jharkhand for a major period of his career.

“We have drawn the attention of chief minister Hemant Soren and also union (rural development) secretary N.N. Sinha towards this issue. We hope that they raise the issue in a proper forum and get it resolved at the earliest as several MGNREGA workers are on the brink of starvation,” said Herenj, who is also a member of the Mahasabha.

According to data accessed from the state rural development department, there are nearly 10.65 lakh labourers who have pending wages to the tune of Rs 10.48 crore.

“Several workers had to take loans from rural mahajans (moneylenders) due to non-payment of wages for the treatment of family members affected by Covid-19. Some have no option but to go for traditional treatment in the absence of funds to meet medical expenses,” said Siraj Dutta, another member of the Mahasabha.

The MGNREG, which guarantees at least 100 days of unskilled work in a year to every rural household, has assumed renewed significance and proved to be a lifeline for migrant workers who returned to their villages after loss of employment in cities.

Jharkhand NREGA commissioner Varun Ranjan said the central government had earlier this week released funds for payment of wages of two categories — ST (Scheduled Tribes) and Others. Allocation for SC (Scheduled Caste) is yet to be released.

“Allocation is released in three categories — ST, SC and Others. We have received allocation for ST and Others from the central government. It will be credited to the bank accounts of beneficiaries through the PFMS (Public Financial Management System) within a day or two,” said Varun Ranjan.

The PFMS is a platform for e-payment under direct benefit transfer (DBT) to both Aadhaar-based and non-Aadhaar-based bank accounts of beneficiaries.