Health officials are trying to understand the circumstances under which over 20,000 vaccinated people in Pathanamthitta contracted the infection 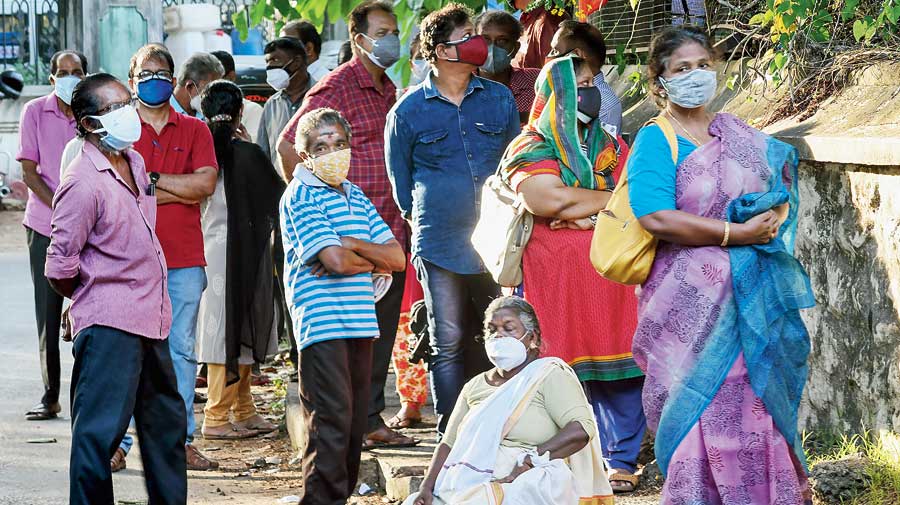 Kerala’s Pathanamthitta district appear to be a mystery to some central public health officials, but not so for state health and other medical experts
File picture
G.S. Mudur   |   New Delhi   |   Published 11.08.21, 01:23 AM

Post-vaccination Covid-19 infections in Kerala’s Pathanamthitta district appear to be a mystery to some central public health officials, but not so for state health and other medical experts.

Central health officials are trying to understand the circumstances under which over 20,000 vaccinated people in Pathanamthitta developed Covid-19, a senior health official said on Tuesday, triggering surprise among other medical experts.

Sujeet Singh, director of the National Centre for Disease Control, New Delhi, said a central public health team had learnt from the Pathanamthitta district administration that 14,974 people were infected after the first dose and 5,042 after the second dose.

“We’re getting these things reviewed by the state — how long after the second dose did the person turn positive, what was the severity of the disease, whether the person had mild or severe disease or required hospitalisation,” Singh said. “Not only from Pathanamthitta, but from other districts as well. We are waiting for this information.”

But medical experts said the numbers of post-vaccination infections by themselves told nothing unless they were placed in context with other critical information such as the total number of vaccinated people in the district and the local infection transmission patterns.

“I’m surprised that post-vaccination infection numbers are cited without any context,” a senior medical researcher in a New Delhi institution who requested not to be identified told The Telegraph. “It is kind of irresponsible.”

State health records in the public domain show that more than 366,000 people in Pathanamthitta have received two doses and over 807,000 have got two doses.

The medical researcher in Delhi said 258 breakthrough infections among over 366,000 of those vaccinated was “actually a small number”.

The number of breakthrough infections depends on both what proportion of the population is fully vaccinated and what percentage is still susceptible to the infection and the level of transmission at the site.

Kerala’s low seroprevalence — the proportion of people protected by antibodies — of 44 per cent implies that 56 per cent had remained susceptible to the infection up to early July.

“This means the state’s public health measures during the first and second waves were strong enough to protect the majority of its people,” a public health expert said. “It also means more people are likely to be available in the population pool to cause breakthrough infections.”