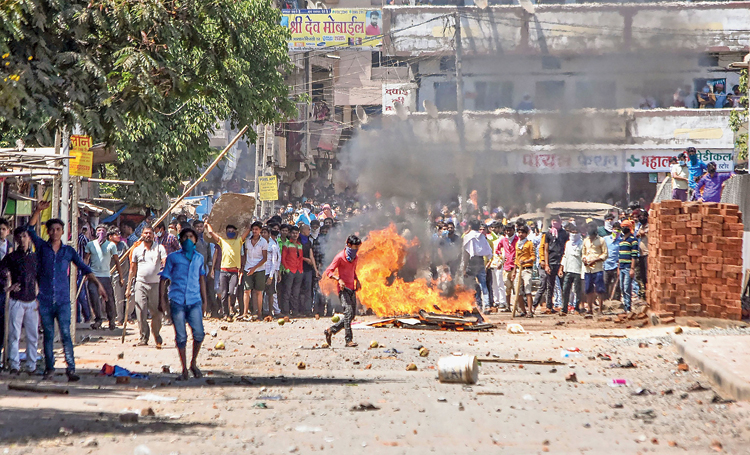 Protests, often violent, have been erupting regularly in Surat of late. Workers have got restive as the first three-week lockdown, announced on a four-hour notice on March 24 that suddenly left them jobless, was extended for another three weeks and then again for two weeks.

On Monday, migrant workers protested on the streets of Rajkot, too. Hundreds came out on the road in the Shapar-Veraval industrial area on the city outskirts, demanding that they be sent back home.

Police said they managed to persuade the workers to call off the protest. “We have reached out to migrants in residential localities and explained to them that they will be allowed to leave after getting a medical check-up done and completing other formalities,” Rajkot deputy commissioner of police (Zone-1) Ravi Mohan Saini said.

Another group gathered outside the Rajkot collector’s office to fill forms to return home, saying they had no food and money. “The factory where I worked is closed and I want to go back home. They say we will have to arrange our own vehicles, but we want the government to send us back by train,” a worker said.

The Centre, giving in to pressure from migrant workers stranded across the country and the Opposition, agreed last Wednesday to allow them to go home but said they could only go by buses that would be arranged by the state government. On Friday, again after protests by the Opposition and requests by several chief ministers, it permitted rail travel.

Gujarat police fired tear gas shells and used lathicharge after more than 1,000 migrant workers hit the streets on the outskirts of Surat on Monday, demanding to be allowed to return home, the protest spiralling into violence in which at least 10 cops were injured.

Earlier in the day, a group of 50 migrant workers in Surat tonsured their heads in protest against the delay in sending them back home, pointing out many of them had sold their watches and mobile phones to pay the Gujarat government for the bus fare.

The workers had started their journey home to Uttar Pradesh two days ago but the buses were stopped at Kosamba town, also in Surat district, for want of “valid permission” and sent back to Surat. They demanded that the governments of Uttar Pradesh and Gujarat, both ruled by the BJP, co-ordinate their movement without delay.

“Many of us sold off our watches and mobile phones to arrange for the bus fare. Now we are still at the same place, with no permission given to our buses to move. We are stranded here with no help from officials,” a worker said. The bus fare, arranged with so much difficulty, has not been refunded, he said.

Congress president Sonia Gandhi on Monday said the Opposition party would pay the rail fare for migrants across the country if the Narendra Modi government could not. In Karnataka, another BJP-ruled state that had initially proposed to charge double the usual bus fare from the migrants, travel by bus has been made free, again under Congress pressure.

“We had asked these migrant workers from Uttar Pradesh to have patience as the authorities are still in talks with the UP government for their journey back home. However, a mob of over 1,000 men suddenly came on the roads and started throwing stones at police, injuring around 10 policemen. Even I received minor injuries on my arm,” Rajkumar said.

“It seems they had planned the attack in advance. We have detained over 80 persons and brought the situation under control,” he added. 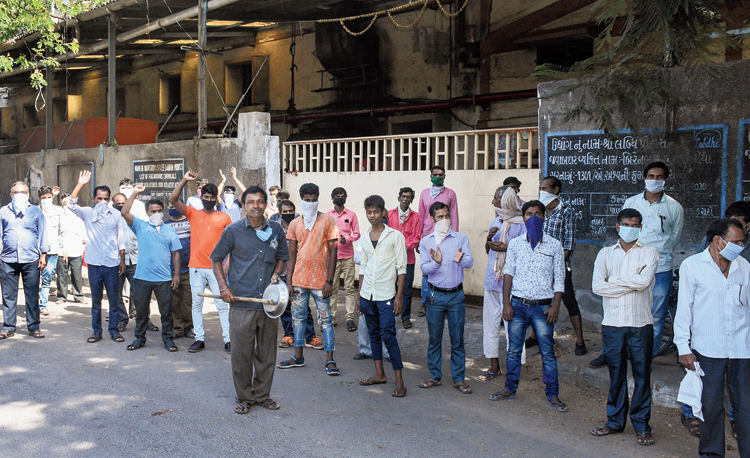