Fear of hunger bigger than virus 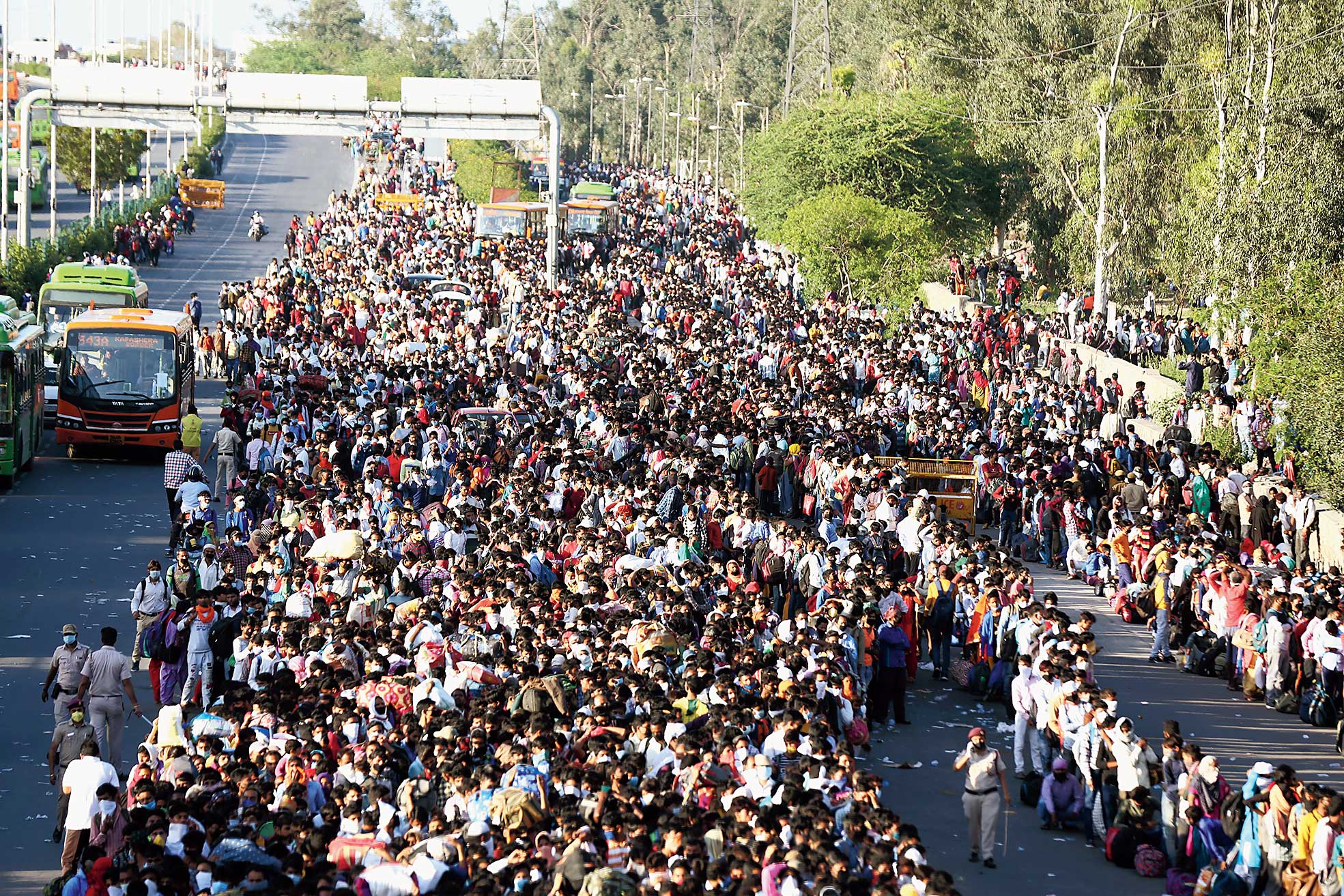 Social-distancing norms are overwhelmed as thousands of migrants converge on the Anand Vihar Bus Terminal in New Delhi on Saturday to board buses sent by the Uttar Pradesh administration to transport them back home.
Picture by Prem Singh
Anita Joshua   |   New Delhi   |   Published 28.03.20, 09:46 PM

The Covid-19 pandemic has triggered a humanitarian crisis in India with thousands of migrant workers walking back to their villages, some over 1,000km away, on calloused feet and empty stomachs, hunger being a more clear and present danger to them than the virus.

Many of them know little about the pandemic except that it has overnight dried up the means of livelihood in search of which they had come to the cities or the greener pastures represented by the country’s south to its north.

This has made it impossible for these day labourers to stay on even in states like Kerala where they are at least assured two square meals from the community kitchens.

What north India has been witnessing since the nationwide lockdown kicked in on Wednesday, Maharashtra had experienced in another form on March 20 after its government shut down all non-essential services till March 31.

Maharashtra’s migrant labourers from the north and the east made a dash for homeward-bound trains and crowded them in violation of the social-distancing norms, for want of any other option.

Despite this early warning of a lockdown triggering a possible exodus, the Centre seemed not to have taken the matter into account while announcing the nationwide lockdown on Tuesday evening with less than four hours’ notice.

For three whole days, while TV and social media flashed videos of people walking out of cities with their families and bundled belongings, the otherwise increasingly visible and voluble Narendra Modi government stayed silent on the subject.

Initially caught unprepared by the exodus, the governments in some of the states with sizable migrant populations — particularly Punjab and Delhi — got their act together. They multiplied their efforts to provide cooked food to those in need and to deliver dry rations to those left with no means of putting food on the table.

Delhi chief minister Arvind Kejriwal appealed to the migrant workers to stay put where they were in keeping with the requirements of social distancing — the rationale for the lockdown.

The Centre confined itself to issuing clarifications to its initial lockdown order — four by the home ministry in three days — bringing back memories of the demonetisation misadventure when new orders were issued almost daily.

The Union government also despatched letters to the states asking them to take steps that most of them were anyway taking to contain the spread of the infection and prepare for the worst.

Barring the chance availability of food en route from Friday, none of this was any consolation for the migrant labourers trudging along the highways that many of them had helped build but never got a chance to use until now.

Some who had cycle carts or rickshaws took turns pedalling their way back home, sometimes as far away as Supaul and Saharsa in Bihar — a good 1,200km from Delhi.

Eventually, on Friday, the Uttar Pradesh government decided to ply buses to ferry the migrants home. But the demand was so high that the main bus terminuses in Delhi saw queues running into miles on Saturday as there appeared to be no schedule for the departures.

Adding to the confusion was the demand from workers bound for Bihar and Madhya Pradesh to be dropped off near their state borders in the absence of separate arrangements to transport them to their native places.

While a couple of private airlines offered to help carry the migrant workers home on special flights, the Bihar and Uttarakhand governments appointed nodal persons to help their stranded workers by the weekend.

It left many wondering why the governments at the Centre and in the states had not made these arrangements before enforcing the lockdown.

Part of the problem was that while the states and Union Territories had gone into lockdown mode on Monday, they were brought into the loop on the nationwide lockdown only after the Prime Minister’s announcement at 8pm on Tuesday.

The 21-day period made the lockdown definitive, prompting the migrant workers to pack their bags and set off for home.

Their immediate future remains uncertain as reports from Bihar suggest that many are wary of allowing the migrants back into the villages for fear of their being coronavirus carriers.