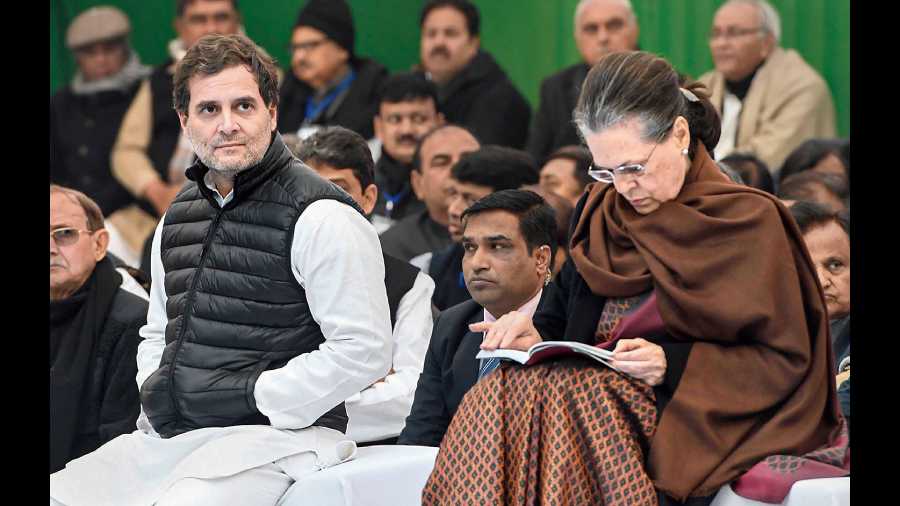 The Congress Working Committee met on Sunday to discuss the outcome of the assembly elections in five states as the opposition party reels from the latest electoral debacle.

The meeting of the party's highest decision-making body is likely to witness some fireworks as the G-23 dissident leaders, who have questioned the leadership and pressed for organisation overhaul, have indicated that the issue of internal polls could be raised again.

Ghulam Nabi Azad and Anand Sharma were among the G-23 leaders participating in the meet.

The Congress lost Punjab to the AAP, could not wrest Uttarakhand, Goa and Manipur from the BJP and the party's tally in politically crucial Uttar Pradesh fell to its lowest.

While Sonia Gandhi has not been actively campaigning for some time, Rahul Gandhi, along with Priyanka Gandhi Vadra, had been the star campaigner for the Congress in the polls, with the brother-sister duo also playing a major role in key decisions of the party.

Despite a high-pitched campaign led by Priyanka Gandhi Vadra, the Congress could manage to win only two of the 403 assembly seats in Uttar Pradesh with the vote share plummeting to a meagre 2.33 percent and most of its candidates losing security deposits.

Rahul Gandhi had resigned as Congress president after the party suffered its second consecutive defeat in general elections in 2019. Sonia Gandhi, who took over the reins of the party again as interim president, had also offered to quit in August 2020 after strong criticism by a section of leaders, referred to as G-23, but the CWC had urged her to continue.

Earlier in the day, top Congress leaders discussed the party's strategy for the upcoming Budget Session of Parliament and decided to work in coordination with other like-minded parties to raise issues of public importance.

The meeting of the Congress Parliamentary strategy group was held at the residence of party president Sonia Gandhi.

Meanwhile, the chorus for making Rahul Congress president again grew louder on Sunday as several leaders and workers voiced support for him to take on the mantle of party chief.

Ahead of the CWC meeting, Rajasthan Chief Minister Ashok Gehlot said no one was taking on Prime Minister Narendra Modi as Gandhi does and was fighting resolutely.

"The prime minister has to start his speech after targeting Rahul Gandhi, you can understand what this means," Gehlot said.

He accused the BJP of winning the recent round of assembly polls by indulging in polarisation. However, he accepted that the Congress lost in Punjab due to infighting.

"As I have said it earlier as well, Sh. Rahul Gandhi should take up the Congress presidency in a full time role immediately. This is the wish of millions of Congress workers like me," he tweeted.

Congress workers from around Delhi, who converged near the party office, were not allowed to enter the AICC headquarter as traffic was held up and the road outside the party office was barricaded by the police.

A group led by Delhi Congress leaders, including Alka Lamba, voiced support for Gandhi to lead the party and raised slogans in his and Congress general secretary Priyaka Gandhi Vadra's favour.

Youth Congress chief Srinivas B V said the Gandhi family is the thread that binds together not only the Congress but all sections of the country and it is not dependent on any electoral victory or defeat.