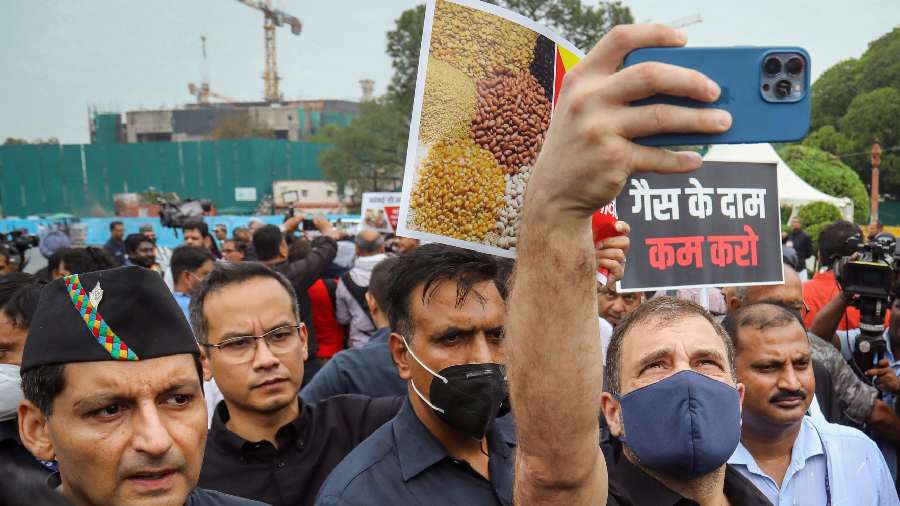 Congress leaders hit the streets on Friday as they staged nationwide protests against price rise and unemployment, with over 300 of them including Rahul Gandhi and Priyanka Gandhi Vadra detained by police for over six hours in the national capital.

Wearing black clothes, Sonia Gandhi and Rahul Gandhi led the charge in Parliament where party MPs took out a protest march and were detained by the police at Vijay Chowk while they were on their way to Rashtrapati Bhavan. Priyanka Gandhi led at the AICC headquarters here, where hundreds were detained by the police amid dramatic standoffs. Sonia Gandhi did not participate in the march due to ill-health.

While several BJP leaders called the protests an attempt to save the Gandhi family, Home Minister Amit Shah linked the protest in black clothes to the party's "appeasement" politics to convey its opposition to the Ram temple foundation laying by Prime Minister Narendra Modi on this day in 2020.

Shah said the Congress was using the issues like ED action and price rise only as excuses.

The Congress hit back saying only a sick mind which can produce such bogus arguments and give a malicious twist to the protests.

"Home Minister has made a desperate attempt to divert, distract, polarise and give a malicious twist to today's democratic protests of @INCIndia against price rise,unemployment & GST. It's only a sick mind which can produce such bogus arguments. Clearly the protests have hit home!" party general secretary Jairam Ramesh tweeted.

The Congress workers and leaders were released by Delhi Police after more than six hours of detention in various police stations, where they were taken away from the protest sites in the national capital.

According to Delhi Police, 335 protestors including 65 MPs were detained. Similar actions happened in various parts of the country, while water canons were also used at some places including in Chandigarh.

While Congress leaders in Delhi had planned to gherao the prime minister's residence and a protest march to Rashtrapati Bhavan, party workers across the country staged protests and dharnas outside Raj Bhavans.

The protesting MPs raised the issue in both houses of Parliament and disrupted the proceedings. They then gathered outside gate number 1 of Parliament House and raised slogans against the government demanding that the GST hike on essential items be withdrawn. Party chief Sonia Gandhi also joined women MPs holding a banner there.

The day started with Rahul Gandhi addressing a press conference, alleging that India is witnessing the "death of democracy" and anybody who raises people's issues and stands against the onset of dictatorship is "viciously attacked", beaten up and put in jail.

Noting that the Gandhi family is attacked because it fights for democracy and for communal harmony, he alleged the sole agenda of the government is that people's issues such as price rise, unemployment and violence in society must not be raised.

"There is no democracy in India and there is a dictatorship of four people, he alleged, without taking any names.

"What we are witnessing is the death of democracy. That is what India is witnessing. What India has built brick by brick, starting almost a century ago, is basically being destroyed in front of your eyes," said Gandhi.

"Democracy is now a memory in India and nothing more. There are going to be consequences of this because people of India will not be quiet about that," he also said.

Noting that he will continue to raise people's issues, he said, "I get great joy when political people attack me. I get happiness."

"No institution is independent and they are in control of the RSS, which has installed its people there. We are fighting against the entire infrastructure," he said, alleging institutions throw their weight against anyone speaking against government.

"There is financial monopoly and institutional monopoly, that is why the opposition is not effective," he said.

On BJP's claim that they have been winning elections, he said, "Hitler also used to win elections. He had the entire institutional structure with him. Give me the power on the institutions and I will show you how elections are won."

Gandhi also alleged that some of the party MPs were even "beaten up" by police.

In a video shot inside a police vehicle and shared by the Congress with reporters, she said, "They think that by putting up a show of power, they can silence us and force us into a compromise. Why will we do that?"

"Their ministers cannot see the price rise, so we wanted to walk to the prime minister's house and show him the high inflation, show him the gas cylinder the price of which is sky high," she said.

Ever since the Congress president announced the Kanyakumari-to-Kashmir "Bharat Jodo Yatra" around three months ago, "Dhamki-jeevi" has intensified his "toxic politics of vendetta" and intimidation against the Congress and its leadership, Ramesh said, adding that "it is not a coincidence".