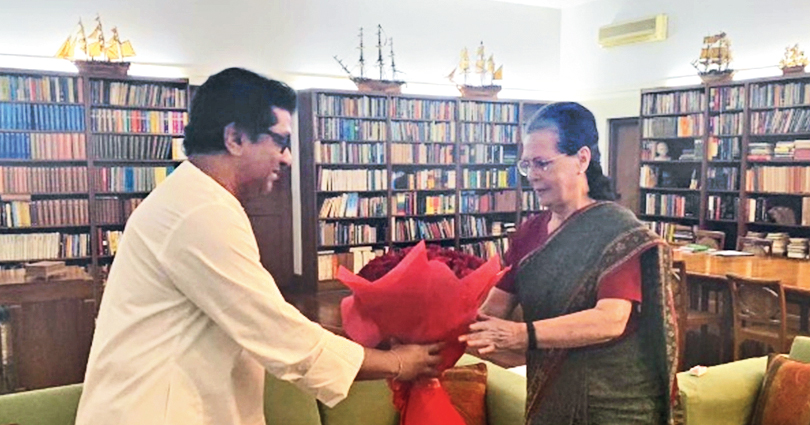 Raj Thackeray on Monday sought Sonia Gandhi’s help to build a mass movement against the alleged manipulation of electronic voting machines, their meeting suggesting a softening of the Congress’s stance on the Maharashtra Navnirman Sena leader.

There has been speculation about the MNS being part of the Congress-NCP combine when Maharashtra holds Assembly elections this year. During the general election, which his party did not contest, Raj had campaigned vigorously for Congress and NCP candidates, attacking Prime Minister Narendra Modi like few others have.

However, the Congress had been cold to NCP chief Sharad Pawar’s proposal to include Raj in the alliance because of its ideological aversion to his politics of communalism and Marathi chauvinism. Sonia’s decision to meet him, however, appears to signal a shift.

Raj had also met chief election commissioner Sunil Arora to submit a memorandum seeking a return to paper ballots, but returned disappointed with the commission’s attitude.

“I have no expectations from the Election Commission. I barely completed the formality of appealing to them; they are not concerned,” he said.

Sonia would not have met Raj had the party not softened its stance on him. The dramatically altered political reality after the general election may have prompted Sonia to change her rigid position on the Thackeray clan.

Sonia has been the only Congress leader to have openly expressed her concerns about the voting machines and demanded the restoration of the public’s faith in the democratic process. Raj has expressed his views more bluntly.

He told Sonia on Monday that the BJP would not win the Maharashtra Assembly elections if paper ballots were used. He said there was no point participating in the election if “the match is fixed through EVMs”.

He indicated he would initiate a campaign against the use of the voting machines in the state after his return. Sonia agreed.

“There are doubts in the minds of voters, (who believe) the votes they cast do not go to their chosen candidates. In such a situation, the Election Commission should switch back to paper ballots and conduct the Maharashtra polls with them. We strongly feel that the EVMs can be tampered with,” Raj told reporters after the meeting.

A Congress MLA told The Telegraph from Mumbai: “We cannot win this (Maharashtra) election if EVMs are used. We welcome Thackeray’s initiative and will support him.”

The Congress may take the lead in the campaign at a later stage after a new leadership structure is in place. The Congress Working Committee is expected to meet this week to announce a new president.

Party veteran Karan Singh, 88, on Monday asked the Congress not to waste any more time pressuring Rahul to withdraw his resignation.

“He is an honourable man. He has worked very hard. Let him withdrawn gracefully,” Singh said.