Describing the attitude of the Modi govt as dictatorial, the Opposition vowed to turn it into a people’s movement 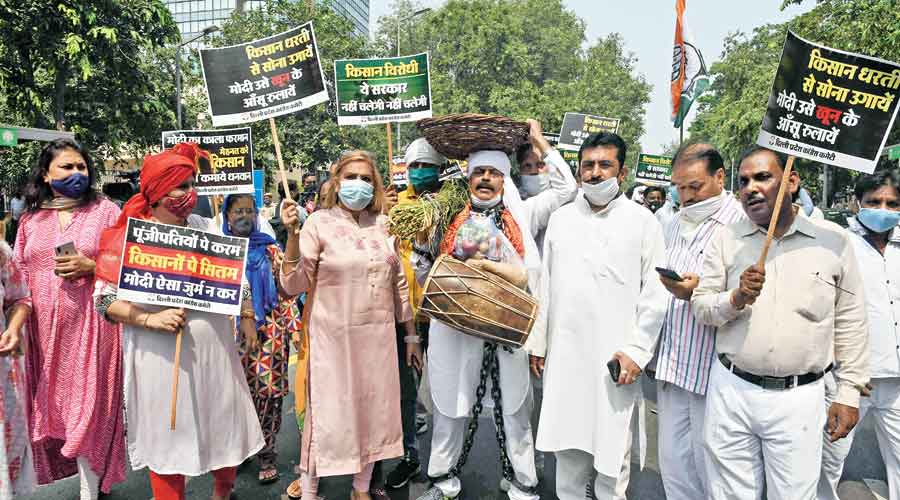 The Congress on Monday announced a nationwide agitation plan from Thursday against the undemocratic imposition of a regressive system on the farmers and vowed to turn it into a people’s movement unless the “black laws” were withdrawn.

Describing the attitude of the Narendra Modi government as dictatorial, the Congress not only lent its “full support to the agitating farmers” but also worked out its own agitation programme despite the coronavirus-induced restrictions. The Congress leadership believes the issues of farmers and youths — two sections of the society that cut across caste and religious barriers — could play a decisive role in its revival strategy. The party has been highlighting the unemployment crisis to lure youths away from the BJP.

While the party will create awareness on the farm bills by holding press conferences across the country over the next few days, every state unit has been directed to organise protest marches culminating in the submission of memoranda to governors. Party chief ministers, legislature party leaders, state chiefs, MPs, MLAs and senior leaders have been asked to participate in the march.

While Mahatma Gandhi’s birth anniversary on October 2 will be observed as “Kisan-Mazdoor bachao diwas” along with sit-in protests at every district headquarters, state-level farmers’ conference will be organised across the country on October 10. This will be followed by a nationwide signature campaign in which Congress workers will spread out in villages to collect signatures from farmers who are opposed to these legislations. These signatures will be submitted to the President on November 14, the birth anniversary of Jawaharlal Nehru.

Congress leaders have also been allowed to participate in protests by farmer unions. The All India Kisan Sangharsh Coordination Samiti (AIKSCC) on Monday announced a separate agitation programme along with social boycott of any party that supports these laws. At a press conference on Monday, the AIKSCC said the government was trying to mislead the farmers in its brazen attempt to help corporate houses and traders.

The Congress worked out the agitation plan at a meeting of general secretaries and state in-charges on Monday afternoon. After the meeting, senior leader Ahmed Patel said: “Democracy is being strangled in and outside Parliament and the government is gradually imposing dictatorship on India. The government is bulldozing its way as if Opposition and views of the people do not matter in democracy. We will not allow this to happen.”

K.C. Venugopal, general secretary in-charge of the organisation, said: “What is the problem if the Opposition demanded wider consultation and deeper examination of the issues when there are serious apprehensions in the minds of the farmers? It is unfortunate that the Prime Minister himself is misleading the nation. The Congress is totally with the farmers and this agitation will continue till these black laws are withdrawn.”

Party’s communications chief Randeep Surjewala said: “The Prime Minister says the Opposition is misleading the farmers. Why can’t the commitment that no crop can be purchased below MSP (minimum support price) be written in the law? Let there be an in-built guarantee. But the government has to abolish the mandi system and procurement system and slowly scrap the public distribution system as well. Modi is not willing to listen to the farmers; he listens only to his financers.”

The Prime Minister’s official Twitter handle had posted: “This year, record procurement of wheat was done in the Rabi season despite Corona. This year, wheat, paddy, pulses and oilseeds worth Rs 1.13 lakh crore was purchased at MSP in the Rabi season.”

Former finance minister P. Chidambaram tweeted: “The Prime Minister and other ministers have promised that MSP will be guaranteed to the farmer. Pray tell us HOW? How will the government know which farmer sold what produce to which trader? There will be millions of private transactions every day in thousands of villages all over India.