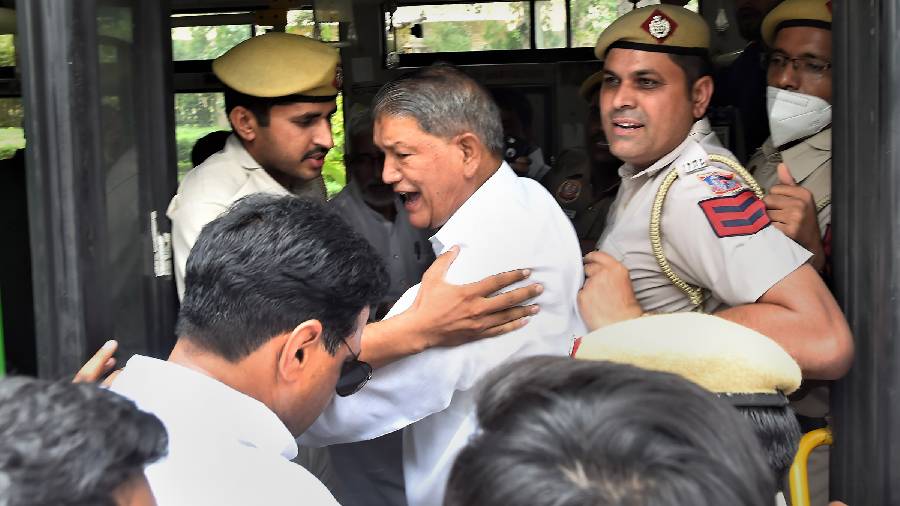 Several Congress leaders, including K C Venugopal and Adhir Ranjan Chowdhury, were detained for violating prohibitory orders outside the heavily barricaded party headquarters here on Tuesday, the second day of Rahul Gandhi being questioned by the ED.

Ahead of his questioning by the Enforcement Directorate (ED) on Tuesday, Gandhi joined senior party leaders at a "dharna" at the Congress headquarters, where the chief ministers of Rajasthan and Chhattisgarh -- Ashok Gehlot and Bhupesh Baghel -- were also present.

All India Congress Committee (AICC) general secretary Priyanka Gandhi Vadra was also present at the protest at the Congress headquarters, along with party MPs and workers.

Gehlot questioned the ED summonses to Rahul Gandhi and Congress chief Sonia Gandhi and their questioning in the case, which he claimed has nothing in it and is part of "vendetta". The veteran Congress leader said Prime Minister Narendra Modi should instead focus on governance and not target opposition leaders.

Baghel described the ED action as a result of "political bias" and "malicious". It is nothing but "political vendetta" and the case has no grounds for investigation, the Chhattisgarh chief minister said.

"The BJP government at the Centre should say whether any action has been taken against a leader of any pro-BJP party in the last eight years. The moment someone joins the BJP, all the cases against him get hushed up. The ED, the CBI, the IT department are used to suppress the voice of the opposition," he said.

Venugopal said this is nothing but "political vendetta" by the Modi government, which is trying to defame the Congress leadership through "false cases".

"They can imprison us but they cannot imprison the truth. The fight for truth shall go on," he added.

This is the second day of the Congress's protests against the questioning of Rahul Gandhi by the ED in a money-laundering case related to the National Herald newspaper.

The former Congress chief was questioned for over 10 hours on Monday.

The Congress has said it will not be cowed down by intimidatory tactics of arrests or "false" cases against its top leaders.