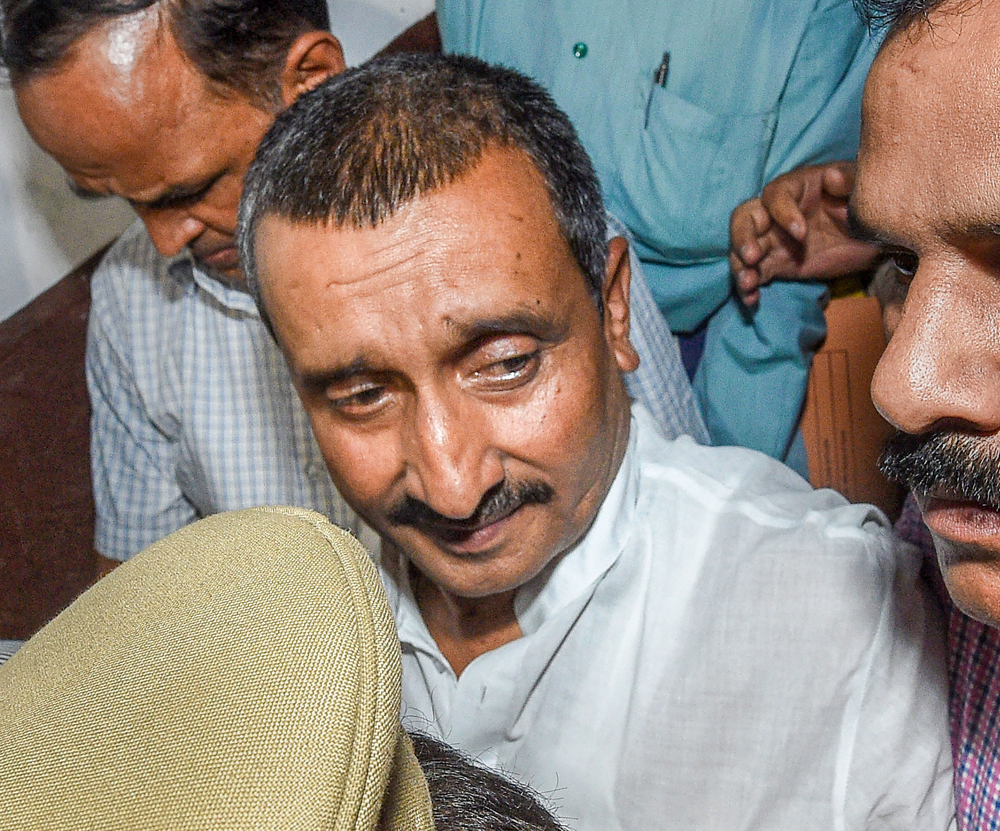 File photo of BJP MLA Kuldeep Singh Sengar in Lucknow. Kuldeep Singh Sengar was among the 10 people named in an FIR registered on Monday in connection with a road accident in which the Unnao rape survivor and her lawyer were critically injured and her two aunts killed, police said.
(PTI)
Our Special Correspondent   |   New Delhi   |   Published 29.07.19, 10:12 PM

The Congress on Monday sought a Supreme Court-monitored probe into the chain of events that led to Sunday’s road collision that left the Unnao rape victim seriously injured and two of her aunts dead.

“This was a pre-meditated attempt to kill…. This has seared the collective conscience of the nation,” party spokesperson Manish Tewari told a media conference.

Tewari said the top court should monitor the investigation.

The rape survivor’s family has accused BJP MLA Kuldeep Singh Sengar, who is in jail for allegedly raping the teen in 2017, of plotting the road accident.

“The chain of events exposes the conspiracy to protect the accused,” Tewari said. “The girl was raped on June 4, 2017, and the police took 16 days to register an FIR. For one year, nothing happened. The girl’s father was beaten up by the goons of the MLA on April 5, 2018, and arrested in a false case. The girl tries self-immolation in front of the chief minister’s residence. The MLA is arrested only then. A day after, the girl’s father dies due to assault in custody.”

Sengar continues to be a BJP MLA and Sakshi Maharaj, the Unnao MP, had gone to meet him in jail after his victory in the Lok Sabha election two months ago to thank him for his support.

While Opposition parties raised Sunday’s accident in both Houses of Parliament, Rahul Gandhi attacked the BJP on the question of women’s safety.

“Beti Bachao-Beti Padhao: A new special education bulletin for Indian women. Don’t ask questions if a BJP MLA is accused of having raped you,” Rahul tweeted.