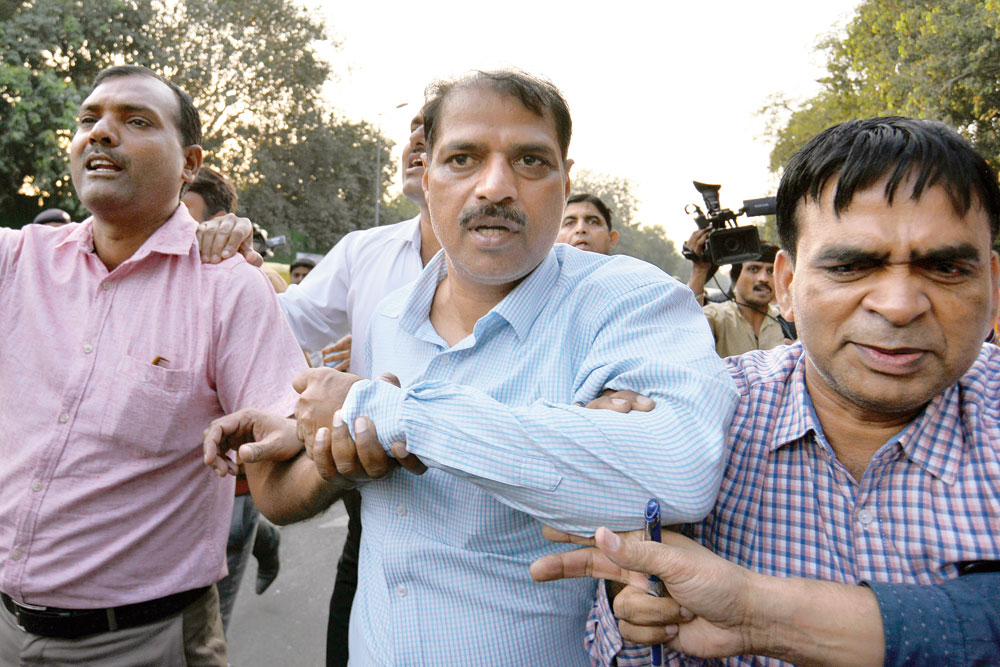 The Congress on Tuesday blamed Prime Minister Narendra Modi for the pitiable state of affairs in the CBI, alleging that the tendency to keep the investigative agency as a captive tool to harass political opponents and protect unscrupulous businessmen had created this mess.

The Congress said the appointment of pliant officers and extensions to retired bureaucrats were deliberate ploys to exploit them for political purposes and the Prime Minister’s role should be investigated. It also termed the Prime Minister’s intervention in the tussle between the two top officials of the CBI as “illegal”.

The Congress had not only opposed the appointment of controversial Gujarat cadre officer Rakesh Asthana as special director of the CBI, it had raised serious questions about the repeated extensions given to the chief of NIA (National Investigation Agency) and boycotted the meeting to discuss the appointment of Lokpal as the Opposition leader didn’t have voting rights.

The Congress has been accusing the government of a political witch hunt and ceaselessly attacked the Prime Minister for what it called “weakening the legal framework for fighting corruption”.

Congress president Rahul Gandhi has been pointing out that a leader who won the people’s trust by promising eradication of corruption had seriously compromised on probity in public life.

In a stinging barb on the Prime Minister on Tuesday, Rahul accused him of giving protection to people who indulge in unlawful activities.

Responding to a report that suggested the external affairs ministry refused to divulge details of people accompanying Modi on foreign tours, Rahul tweeted: “The Prime Minister should have said ‘I take those people along with me who would otherwise be taken away by the police’.”

The Central Information Commission had asked the external affairs ministry to disclose the names of government and private individuals who had accompanied the Prime Minister on foreign tours. However, the ministry refused to answer the RTI query on the ground of confidentiality.

The Congress and civil society activists have made the dilution of the Right to Information Act a key issue against the Modi government over the past four years.

In the context of the raging CBI controversy, Congress communications chief Randeep Surjewala said: “The Prime Minister is solely responsible for dismantling, denigrating and destroying India’s premier investigation agency. Habitual and perpetual misuse of the CBI for fixing political opponents and illegal intervention to tamper investigation of serious criminal cases have landed the CBI in an unfathomable mess.”

Surjewala added: “Modi’s role is under a cloud. It needs to be investigated as to who in the current political dispensation is involved in the entire saga and is attempting to shield the accused involved in the matter? Instead, Prime Minister is illegally and unconstitutionally interfering in the investigation.”

He referred to cases like the Vyapam scam and the escape of Nirav Modi and Mehul Choksi to question the role of the political executive.

Raising several questions, Surjewala said: “Why was Rajiv Singh, joint director of bank securities and fraud cells of the CBI, transferred suddenly on May 24, 2018? Even more intriguing was the abrupt transfer of Nina Singh, joint director, special crimes, and repatriation of two more officers from the CBI — Anish Prasad, DIG, and K. Gopalkrishna Rao, SP — all of whom were probing Nirav Modi-Mehul Choksi scam?

“Even more astonishing is the fact that when a senior officer at present posted in the PMO was alleged to have culpability in the coal scam, he was made a witness instead of an accused.”