Khan had gone on leave after his appointment, as agreed earlier, and reported for work on November 21 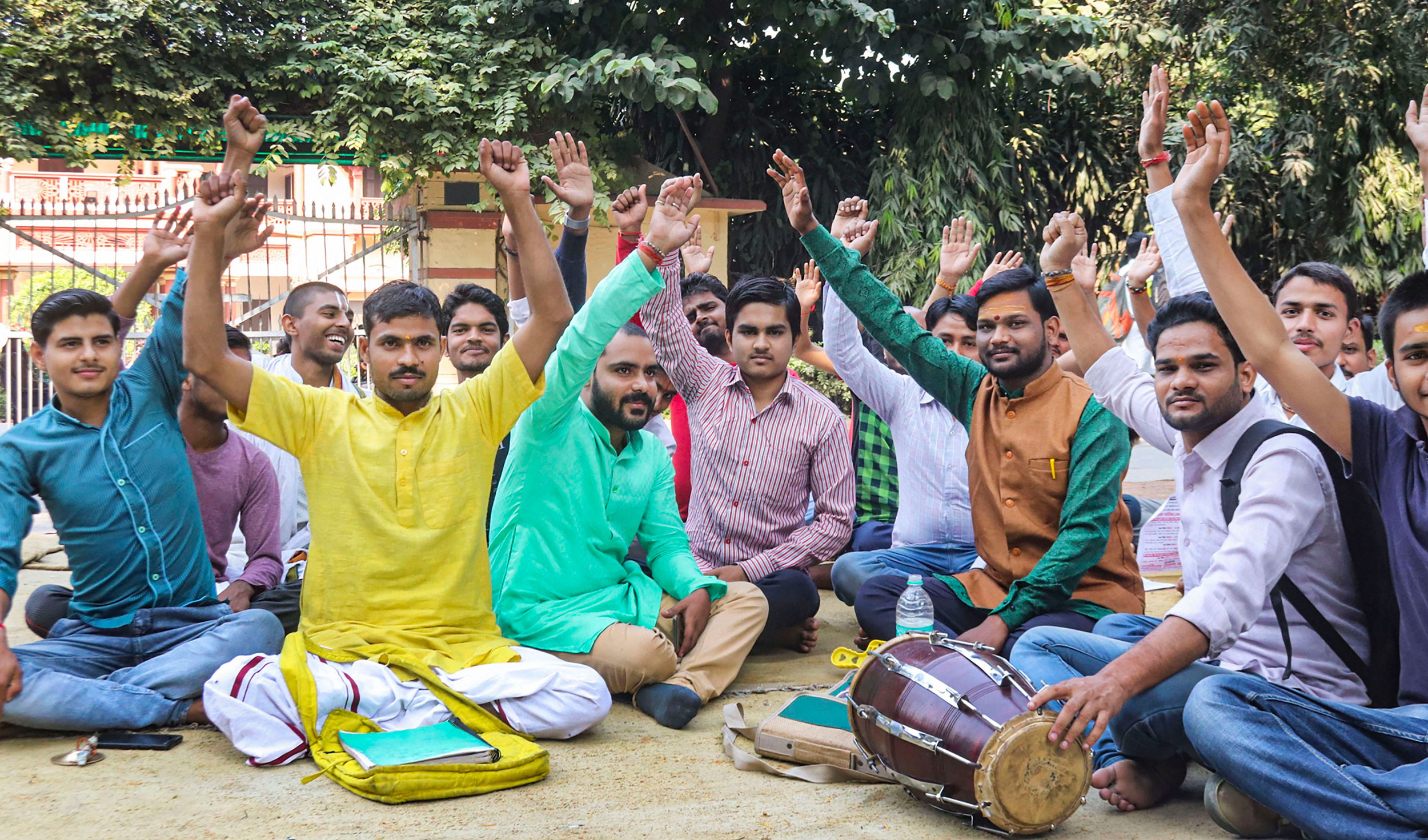 Banaras Hindu University authorities have so far publicly stood by their Muslim Sanskrit teacher but sources suggested that plans were afoot to appease those protesting his appointment by shifting him to one of two in-house institutions that have their own Sanskrit departments.

While the vice-chancellor and most of the students and teachers have openly supported Khan, a group of around 50 serving and retired BHU teachers on Sunday wrote to President Ram Nath Kovind and Prime Minister Narendra Modi seeking the cancellation of Khan’s appointment.

These teachers, who have not revealed their identities, have suggested that Khan can alternatively be relocated to the university’s separate Sanskrit language and literature department that governs Sanskrit studies in the affiliated colleges.

One of these colleges — the Mahila Mahavidyalaya, a women’s postgraduate college — is located within the university campus and its teachers are direct BHU employees. Shifting Khan there is a possibility, campus sources said.

A teacher who didn’t want to be named said that Khan could also be transferred to the Samhita and Sanskrit department at the Institute of Medical Sciences on the campus as a “middle path”.

The Samhita and Sanskrit department caters to the Ayurveda course the institute teaches apart from an MBBS programme, and its curriculum too includes studies of ancient Sanskrit texts and literature. The medical institute’s teachers too are direct BHU employees.

“Khan had applied also for the post of assistant professor at the department of Samhita and Sanskrit, for which the job interview is to be held on November 29. We think he might be appointed there and asked to resign from the Sanskrit Vidya Dharma Vigyan Sankay,” the teacher said.

He added: “Khan is now staying as a guest in the quarters of another teacher for security reasons. The VC has asked him to stay away from the media.”

Khan has so far not been able to hold any classes because the protest by a handful of Sanskrit students has scared their peers enough to shut down all classes in the department since November 8.

Khan, 32, had gone on leave after his appointment, as agreed earlier, and reported for work on November 21. Although the VC persuaded the protesters to call off the dharna on November 21, the class boycott has continued.

After two more working days, all classes will close on Wednesday in preparation for the coming exams, starting December 2 and stretching till January-end.

It’s unlikely the class boycott will be lifted before Wednesday, so Khan will not be holding any classes this semester — which might help make his possible transfer appear less jarring.

“We will start attending classes again after the exams. Hopefully, there will be a solution by then,” an undergraduate student said, asking not to be named.

According to the protesting students and the teachers who wrote to Kovind and Modi, the Sanskrit Vidya Dharma Vigyan Sankay had never appointed a Muslim teacher since its curricula include religious scriptures.

A large number of students and teachers, as well as artistes and writers of Vanarasi, held marches in Khan’s support on November 20, 21 and 23, calling the protests “unconstitutional”.

Girdhar Malviya, chancellor and grandson of BHU founder Madan Mohan Malviya, said his grandfather would definitely have appointed any Muslim Sanskrit teacher who cracked the interview. The VC has told reporters that Khan had been the best among the 10 candidates interviewed.

Khan on Saturday received endorsement from the RSS vibhag sanghchalak for the Kashi zone, Jay Prakash Lal, who said the appointment of a Muslim Sanskrit teacher was in keeping with BHU regulations and the students should cooperate with their new teacher.

“It’s because of the popularity of Sanskrit that people from every religion are studying this language. The RSS doesn’t want any division between Hindus and Muslims on such issues,” Lal said.