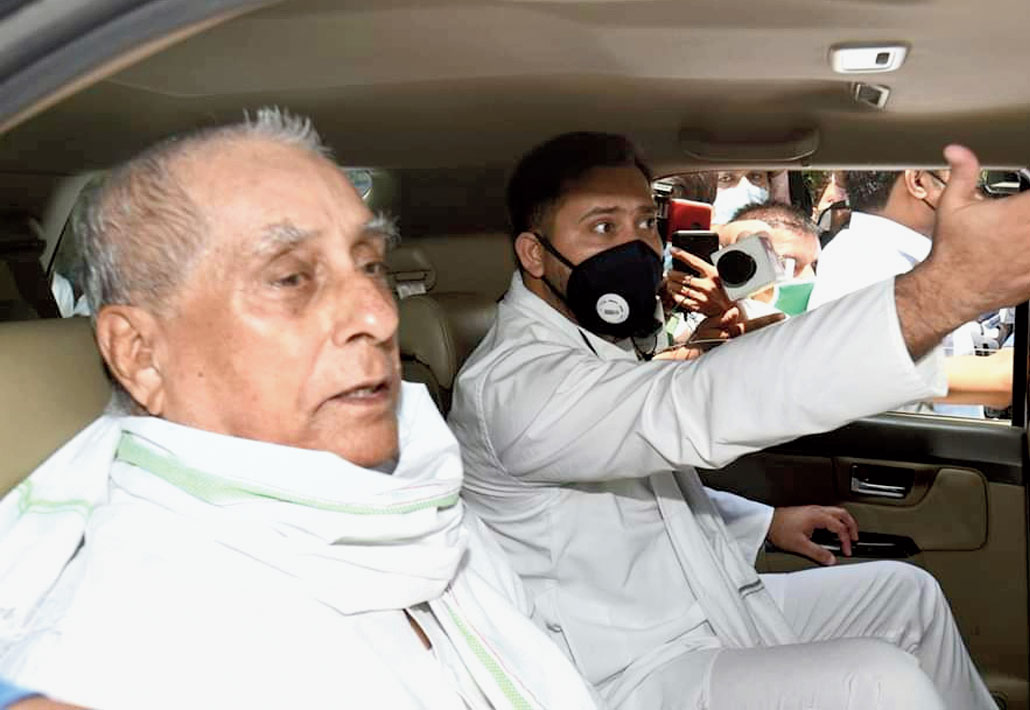 Tejashwi and RJD state president Jagadanand Singh inside their car after being stopped by the police.
Picture by Sanjay Choudhary
Dev Raj   |   Patna   |   Published 30.05.20, 12:19 AM

RJD supporters clashed with police when leader Tejashwi Prasad Yadav was stopped from embarking on a 150km car rally in defiance of the lockdown from Patna to Gopalganj to protest a triple murder in a party leader’s family that has been linked to an MLA of the ruling JDU.

The police obstructed Tejashwi’s vehicle when it did not stop when asked to. Several hundred RJD leaders and workers who had come to take part in the rally clashed with the police and shouted slogans against the ruling NDA government led by chief minister Nitish Kumar of the JDU.

Tejashwi, the leader of the Opposition in Bihar, had announced the car rally a couple of days ago and asserted that he would go ahead with it if the government failed to arrest Amarendra Kumar Pandey alias Pappu Pandey, the JDU MLA who is an accused in the triple-murder case.

“Gopalganj is my home district and also the place of my maternal grandparents. I was going to console and seek justice for the family of the victims. I have been stopped on the pretext of the lockdown, but there is no lockdown for criminals who are moving around freely across Bihar,” Tejashwi told journalists after the rally was stopped.

The jostling continued for two hours as Tejashwi waited in his vehicle, insisting that the police show him papers making it clear that he was under house arrest.

Rabri, who too waited in her vehicle, said: “If they (JDU) kill people belonging to our party, will our party remain silent? Don’t we have the right to speak and protest against crime and criminals?”