Claim of US, UK leash on Modi strikes 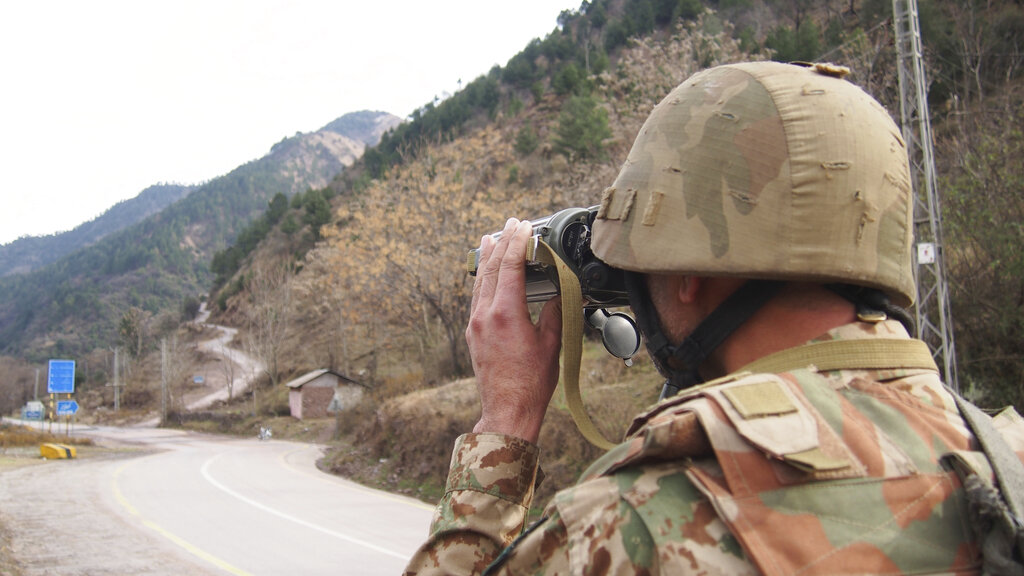 A Pakistani soldier watches the movement of Indian forces along the Line of Control from a Chakoti post, 50 km from Muzaffarabad, the capital of Pakistan-occupied Kashmir.
AP
Nasir Jaffry And Our Delhi Bureau   |   Islamabad   |   Published 05.03.19, 09:36 PM

Prime Minister Narendra Modi was stopped from attacking Pakistan by the US and Britain that feared a nuclear conflict after Islamabad informed them of its intention to target 12 cities in India and hit back three times harder, the largest circulated English newspaper in Pakistan has reported.

“India was also warned by the US that the international powers would not be able to stop the confrontation from progressing into a full-blown nuclear war,” The News reported on Tuesday.

The newspaper quotes what it described as well-placed sources who have not been named. (Reports quoting unnamed sources are not as credible as those in which individuals speak on record and take ownership of their disclosures. The News is a reputable newspaper in Pakistan and belongs to the Jang Group that was founded before independence.)

Sources in India referred to the Pakistani Deep State’s old narrative of India posing an existential threat to that country and said Islamabad “wants to divert international attention from our concern over terrorism to their concern about the threat from India”.

The media reports were also attributed to the war hysteria that Islamabad is allegedly trying to whip up.

The News daily said Modi held a meeting with the chiefs of the three services on February 27, a day after the Indian air strikes.

Modi and his generals reportedly “selected to hit at least nine targets inside Pakistan” with missiles and then “finalised” at least two cities as first targets. “Government sources in Pakistan say the initial targets were most probably Karachi and Bahawalpur,” The News reported.

Pakistan’s intelligence agencies came to know of “the details in time and informed the highest offices in the government”. Prime Minister Imran Khan chaired a meeting of the National Command Authority (NCA) late on February 27. The NCA controls the government policy on nuclear weapons.

Sources told the newspaper that the meeting discussed the Indian plan in detail and selected 12 Indian cities that were to be hit in retaliation in the event of Indian aggression.

“All hits were to be of conventional weapons,” The News reported, quoting sources. “If India were to hit Pakistan with one missile, Pakistan would have reciprocated with three — on three different cities inside India,” the newspaper quoted the sources as saying.

“Once the meeting firmed up its proposed action in case India went ahead with her plan, Islamabad informed the United States and the United Kingdom of its retaliatory strategy. They were clearly told that 12 Indian cities have been shortlisted for the purpose,” the daily reported, quoting the sources.

“The United States not only conveyed the Pakistani message to India — of hitting them three times harder, they also told them that nobody would be able to stop them (Pakistan). And that the next stage could be a nuclear war,” The News quoted the sources as saying. They added that the US “warning” was the “only thing that forced India to back off from trying what they had planned”.

A cabinet minister said the Pakistan government had been informed of the purported Indian plan to attack the country with missiles.

The News quoted “well-placed western sources” as saying that they did not rule out the possibility of New Delhi having spoken to Washington, London and a few other European countries about plans to hit selected targets inside Pakistan.

“It would be hard to say if the Indians had informed important world capitals of their intended plans. But as an important country in the region with strong relations with the West, there is a likelihood that they might have…,” the newspaper quoted a key official of CTD Advisers, a London-based strategic intelligence firm with global presence, as saying.